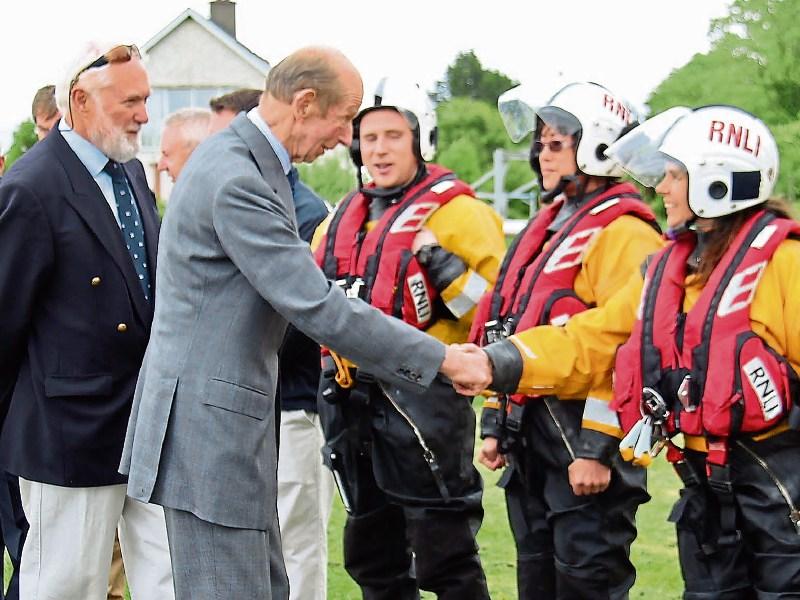 The visit of the Duke of Kent, Prince Edward, to Lough Derg RNLI station at Dromineer has been described as a “tremendous boost” for all the volunteers – crew, operations team, fundraisers and the local community.

The Duke, who is a cousin of Britain's Queen Elizabeth, visted the station at the end of May in his capacity as president of the RNLI.

He was accompanied by Stuart Popham, recently appointed chairman of the RNLI, who was also on his first visit to the station.

Liam Maloney, Lough Derg Lifeboat operations manager introduced the Duke of Kent and Mr Popham to volunteers at the station.

The party was shown around the lifeboat station, where Prince Edward chatted to crew and asked questions about training and rescues.

He then watched as the Lough Derg RNLI lifeboat, Elsinore, launched and performed manoeuvres in the bay.

Mr. Maloney showed the Duke and Mr Popham plans for a permanent station in Dromineer village.

The Duke also met Niamh McCutcheon, chairperson of the Lough Derg Fundraising branch and her committee.

Prior to a light lunch, Prince Edward was entertained by Ned Kelly’s band of young musicians who played a range of Irish music and accompanied young Irish dancers from the local Irish dancing school in a flawless routine.

The Duke commented that the dancers would be “future Riverdance performers”.

Following lunch Brian Hanly, deputy launching authority for Lough Derg Lifeboat, presented Prince Edward with a rug made especially for the occasion at his Woollen Mills on the Nenagh River.

Meanwhile, Lough Derg RNLI was on duty over the bank holiday weekend, carrying out two operations on Sunday in quick succession.

The first incident was reported while the lifeboat was on a training exercise.

The crew was about to return to base when they were alerted to the incident at around 11.20am after a member of the public reported a yacht on rocks about a kilometre north of Killaloe.

It’s understood the 22ft yacht, with two people on board, had been drifting and was blown on to a rocky shelf. The lifeboat towed the yacht into deeper water, and, when confident the vessel hadn’t been damaged, the couple made their way to Killaloe using their outboard engine.

At 4pm the same day the crew was called into action again when a lone yachtsman called for help on his radio. The call was picked on the radio network by watch officers at the Irish Coast Guard marine rescue sub centre in Valentia.

The man reported he had run aground at Stick Rock at the northwestern end of Lough Derg. The lifeboat located the casualty vessel and assisted the sailor berth at Cloondavaun Bay.