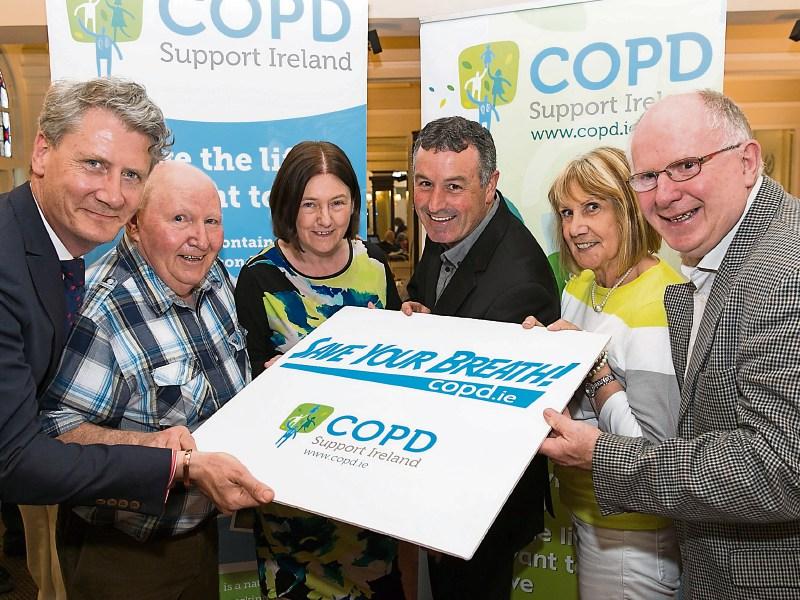 This week is COPD Awareness Week, and the Irish Pharmacy Union and COPD Support Ireland launched a campaign to offer advice and support to the half a million Irish people living with COPD and to raise awareness to help people spot the symptoms and seek early treatment.

COPD (Chronic Obstructive Pulmonary Disease) is a collective name for two main lung conditions (emphysema and chronic bronchitis) that make it hard for sufferers to breathe due to obstruction in the air passages of their lung. COPD is the most common cause of emergency admissions in Ireland, with 15,000 patients admitted annually. Numbers with the disease are increasing and many patients are not yet diagnosed. It is the fourth most common cause of death in Ireland after lung cancer, heart disease and stroke.

Speaking at the launch of the campaign Daragh Connolly, community pharmacist and IPU President said, “At present there is no cure for COPD. However, there are things you can do to make it easier to live with COPD and to slow down the progress of the disease. Pharmacists have a vital role to play in this regard and are important in identifying undiagnosed COPD in a patient. People who are regularly looking for over-the-counter cough remedies should be advised to seek further investigation.”

“We also know that the earlier you seek help, the more effective the treatments will be. Most importantly, if you think you have some of the symptoms of COPD and you smoke, you must try to stop immediately. Call into your local pharmacist for help and support.”

Mr Connolly also advised people with COPD to become aware of what triggers make their condition worse. “Your pharmacist can help you to better understand your disease and manage it so that you can avoid hospitalisation.”

Alongside smoking cessation, some treatments for COPD include:

Inhalers: There are various types and devices available. Depending on the medication inside the inhaler, these will help make breathing easier by opening up the airways and treating flare-ups.

Exercise: One of the most important treatments is exercise. Ask your healthcare professional about pulmonary rehabilitation and an exercise programme.

Corticosteroids: These can be given to soothe the inflammation in your lungs and help you breathe easier.

Antibiotics: COPD may make you more vulnerable to infection. Bacteria causing the infection can cause exacerbations. Antibiotics will help to eliminate the bacteria.

Flu Vaccine: COPD can make you more vulnerable to infections like the flu and pneumonia. Seasonal vaccinations help prevent infections.

Damien Peelo, Executive Director of COPD Support Ireland, said:  “COPD Support Ireland is delighted to be working in collaboration with the Irish Pharmacy Union on COPD Awareness Week. COPD continues to be a major health issue in Ireland with an estimated 200,000 people diagnosed with COPD.  Already, we have the highest rate of hospitalisation for COPD in a survey of 31 countries in the OECD. There are many more undiagnosed people, up to 300,000 in the community, who also need appropriate treatment and care.  We should be managing this illness much better in primary care.  The local pharmacy plays a vital role in the management of COPD and could potentially have an even greater role in identifying those who have the symptoms of COPD but are as yet undiagnosed.  The pharmacist provides a trusted source of information and based in the heart of our communities they provide a very accessible service to people living with COPD.”

If you answer yes to four or more of the following questions you should ask your Pharmacist about COPD:

1. Do you cough several times every day, most days of the week?

2. Have you been coughing like this for more than three months?

3. Do you cough up mucus (phlegm) most days?

4. Do you get breathless from physical activity or moderate exercise?

5. Are you a smoker or former smoker? Smokers are at the biggest risk of COPD

6. Do you live in or work at places with a lot of pollution, fumes, dust, or smoke?

7. Is there a family history of lung conditions?

You can learn more about COPD at www.saveyourbreath.ie