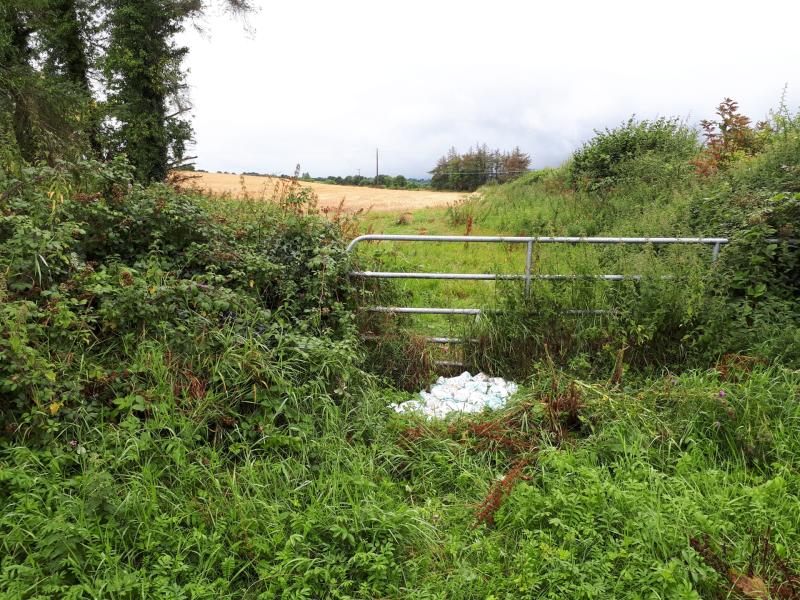 Residents living on a popular walking and running route on the outskirts of Thurles, have been left disgusted by the actions of illegal dumpers who deposited a heap of used nappies in a gateway leading onto land recently purchased by Coolmore Stud.
Picturesque Seskin Lane, which links Cormackstown with Killinan and which is used extensively as a route for fun runs and walks, is very well known locally and is regarded as a quiet road, despite being a fairly busy one.
And, residents on the lane are constantly maintaining their properties and ensuring that they look well with flowers, shrubbery and trees all tended to throughout the year. Indeed, the hedges too are kept in check to ensure that they don't take over the narrow roadway - a roadway which was resurfaced a few years ago by the former North Tipperary County Council, as it had fallen into a poor state.
And, despite some locations along the land having been dumping hotspots for some time, residents were happy that the area had not been targeted in recent months. Until now.

When The Tipperary Star was alerted to the latest dumping and visited the area this week, we found the large bundle of nappies very easily as they were simply discarded in front of a gateway in plain sight. The nappies were not even wrapped up in nappy sacks or anything like that and it was a quite a disgusting sight on the side of the road. There was no effort whatsoever to conceal the nappies - they were simply left there for somebody else to deal with them.
One wonders how somebody could gather all those nappies, hold onto them, and the decide to dump them on the side of the road in such a fashion.
The matter has been reported to Tipperary County Council - the local authority is constantly inundated with requests to clean up areas where dumping has occured - and each time workers have to come to tend to areas such as Seskin Lane, it is costing money. Surely, this money could be better spent to other very necessary works, instead of having to pick up after people without any social or moral conscience.
“I couldn't believe it when I saw this on the side of our road. It made me feel very angry to think that people would just drive down our road and dump nappies like that. It's unbelievable and I would just appeal to anybody who sees people dumping like that to report them. Take a number of the vehicle and report it - it's only by doing this that people might cop on,” one angry resident said.
Another passer-by was disgusted to see the deposit in the gateway on the side of the road and was equally as vexed when informed of what had happened.
“For God's sake, what kind of an animal would do that. It would make you wonder about people,” the passer-by said.
The gateway where the nappies were dumped, is beside a grove and leads into land purchased recently by Coolmore Stud. It was a very easy target for the dumpers and it is assumed that the dumping took place late at night, probably under the cover of dark.