”Anyone who thinks that faith is dead in Ireland has got it very badly wrong. Not only is there deep faith, but there is also a very deep goodness as well.”
The words of Fr Tim Bartlett, Secretary General of the World Meeting of families 2018, when he spoke to The Tipperary Star during his visit to the annual Novena in Holycross Abbey will resonate across many parishes in the Archdiocese of Cashel and Emly.
Fr Bartlett had visited many parishes already and has accompanied the World Meeting of Families 2018 icon on its visit to various parts - it was in Holycross Abbey for a number of days this week, and will be in Emly until Friday, and in Newport from Friday to Monday next. People are encouraged to fill in petitions which will be distributed to contemplative orders throughout the country and prayed for during the next eleven months, before being brought together for the final Mass at the WMOF2018, which will be celebrated, all going well, by Pope Francis himself, at a venue to be announced.
Fr Bartlett, a native of Belfast, confessed to being bowled over by the Novena experience in Holycross. “I could not believe the crowds which attended this beautiful Abbey. And everybody was so welcoming and so warm. It is a very special place and eventhough I live a long way from Tipperary, I'll remember this experience for a long time to come,” he said this week.
The huge responsibility which goes with organising the WMOF2018 event in Dublin is shared with Archbishop Diarmaid Martin, Archbishop of Dublin. And, the Archdiocese of Cashel and Emly, and the Diocese of Killaloe can play a big part in the celebration. 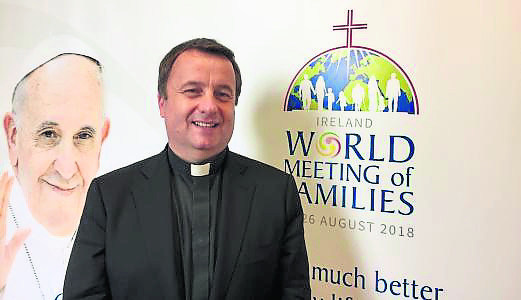 Fr Tim Bartlett who preached in Holycross Abbey at the Novena on Monday.

The recurring theme of the Novena in Holycross this year has been the family, and Pope Francis has specifically chosen Ireland for the WMOF2018 - other countries had wished to host it, but Pope Francis asked specifically for Ireland to take on the challenge.
Pope Francis sees the family as being central to the Church - he refers to the Church as' the Family of Families' and refers to the family as being 'the first hospital of our lives.' He asks for families to be embraced, with all the complexities, conflicts, difficulties and tensions, but also recognising the galaxy of daily acts of kindness which exist in families.
“Pope Francis says that the future of the world will depend on the institution of the family in all it's various, complex forms. There is the ideal family scenario and of course we should all strive towards that, but it is also very important to celebrate and acknowledge the goodness and grace of families which are not ideal. That is his mission and he has written to all parishes asking that preparations be undertaken for the WMOF2018,” said Fr Bartlett who was fourteen when Pope John Paul 11 came to Ireland in 1979 - “I was disappointed that he was not coming to Northern Ireland, but I got to see him up close because my father, who was a very good tenor, was singing in the Mass choir, and he brought me along. Anyone who knows me, would get a good laugh out of that, because I would have no business being part of the choir,” he joked.
Fr Bartlett describes Pope John Paul 11 visit as having a very strong positive affect on his own vocation and he hopes that the visit of Pope Francis, should it happen, would leave a similar mark upon young people.
“Pope Francis knows that we are a friendly people and that we will welcome all those visitors to Ireland for the WMOF2018 event. He has seen the great work of Irish missionaries all over the world, including lay missionaries, and he knows that their vocations were formed and developed through their families. He is of the view that through the family, goodness will flourish and he has been encouraging people to go out from the Church and the sacristy and go forth to the people and be present amongst them. That's his way - he visits prisons, lives a simple life and leads by example,” he says.
While the annual Novena is a major logistical event in Holycross with scores of people assisting Parish Priest Fr Celsus Tierney, the World Meeting of Families 2018 event will be many multiples of the Novena with thousands expected to descend upon the RDS for the three day Pastoral Congress; the Festival of Families celebration on Saturday August 25th which hopefully will have the Pope in attendance. The World Meeting of Families concludes with a Solemn Eucharistic Celebration on Sunday August 26th that will gather individuals and families from all around the world in thanksgiving and communion. The Mass will mark the conclusion of the World Meeting of Families 2018 in Dublin and the next diocese to host the event in conjunction with the Dicastery for the Laity, Family and Life will be announced.
“It will be a huge logistical challenge and will require a lot of resources, a lot of help and lot of discussion. Here in Cashel and Emly there will be special information nights and we hope that the event will have a lot of different impacts in the community, just as the Novena has here. There is much to look forward to, much to be excited about and much to do,” Fr Bartlett said.
The World Meeting of Families started in 1994, when Pope St John Paul II asked the Pontifical Council for the Family (now part of the Dicastery for Laity, the Family and Life) to establish an international event of prayer, catechesis and celebration that would draw participants from around the globe and that would help to strengthen the bonds between families and bear witness to the crucial importance of marriage and the family to all of society. The Irish event next August will be the ninth such meeting, with Pope John Paul 11 having presided over four of them, Pope Benedict, three, and Pope Francis was present for the last one in Philadelphia in 2015.
Pictured above: The World Meeting of Families Icon which was in Holycross Abbey during the week and will be in Emly and Newport in the next few days.