Club and community the winners 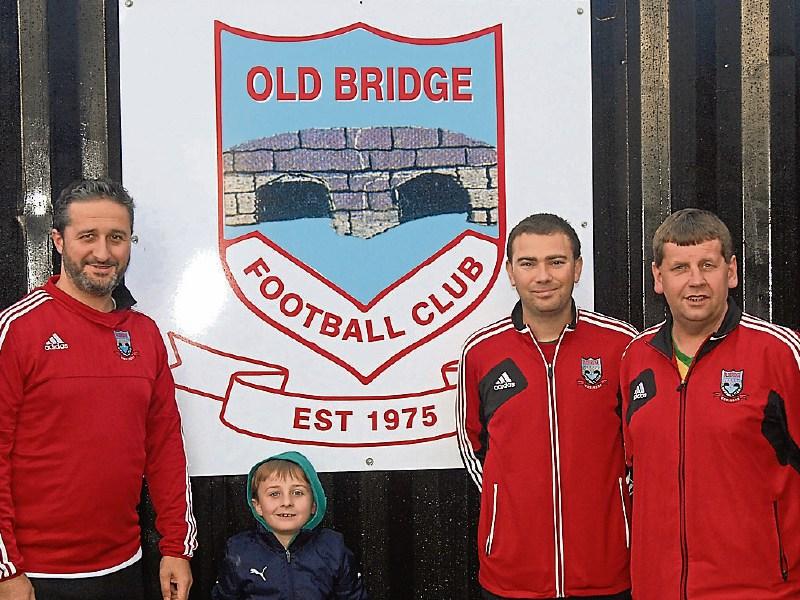 AFTER an absence of 15 years from their spiritual home, Old Bridge Football Club have recently returned to their picturesque  home grounds  at Green Lane, Clonmel.

The freshly-laid grounds adjacent to the new riverside walk look magnificent, being idyllically located, sandwiched between the River Suir on one side and the foothills of the Comeraghs on the other. But this homecoming to Green Lane is not just a football story per se.

The ‘coming home’ of Old Bridge FC to Green Lane, as well as being  the triumph of a small football club against great odds, is also the epitome of what can be achieved when volunteer community and commercial support come together for the benefit of all.

Founded in 1975 Old Bridge FC operated from Green Lane for over a quarter of a century before Flood Relief works along the Suir forced them to pastures new. 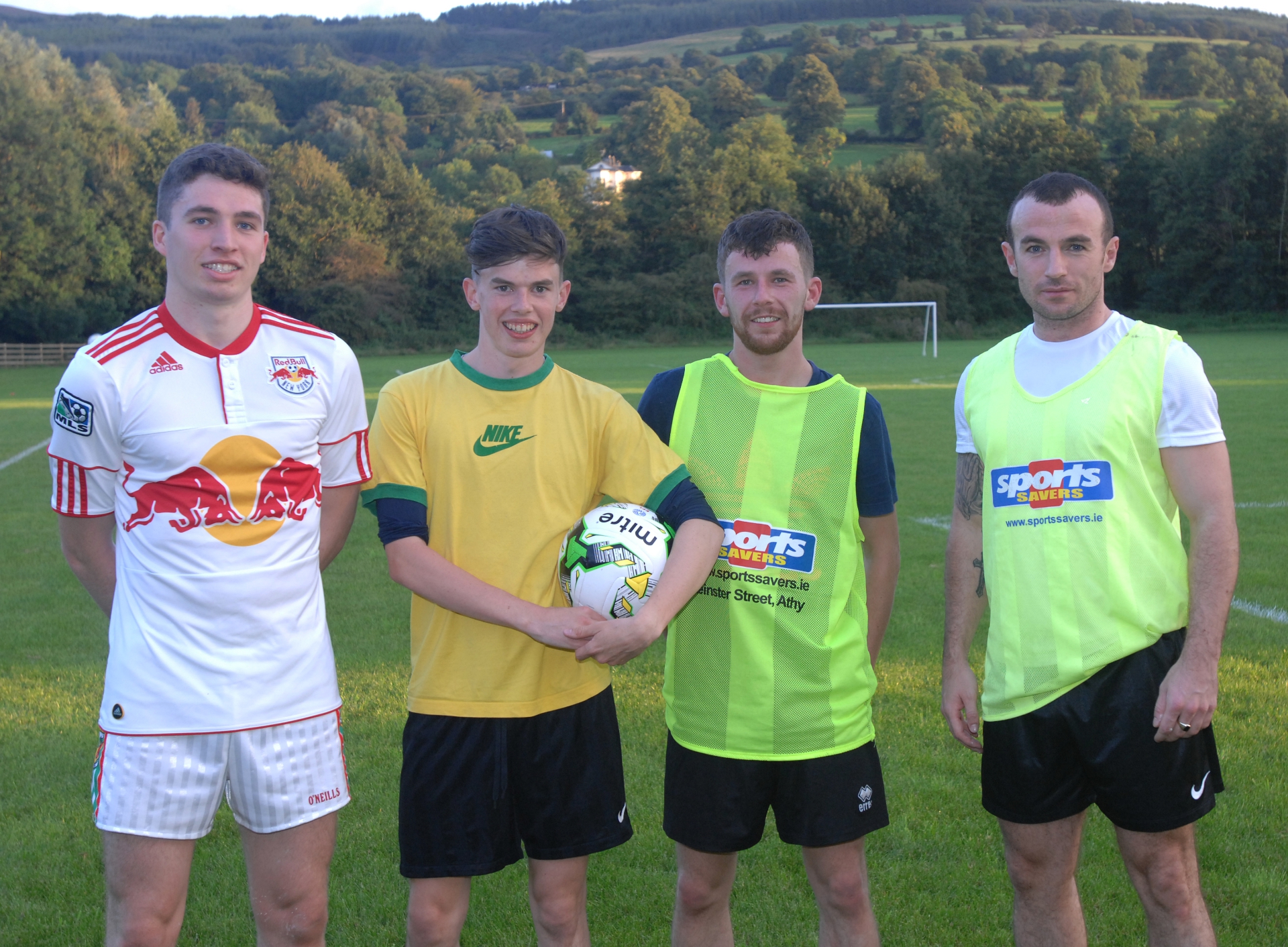 Old Bridge squad members at a recent training session: From left: John Bates, Jack Kennedy (team captain), Adrian Shanahan and Kevin McGrath. Jack Kennedy had the honour of scoring the club's first goal back at Green Lane in the 2-2 draw with Peake Villa.

The Rosminian Order in Ferryhouse accommodated ‘The Bridge’ with a home venue from 2002 to 2015 (for which the club remain eternally thankful) but further change was forced upon the club two years ago.

Having won promotion to the Premier League, a TS&DL directive insisted each home club had to provide on-site dressingroom facilities, so once again ‘The Bridge’ were caught offside in football speak. The only option left open to them if it wanted to compete in  top flight football in Tipperary was for the club to play each and every game away, and so for the past two seasons this nomadic band of brothers has been holding their own in the Premier League at a great disadvantage.

Working equally as hard as the players on the field over the past couple of years has been the Old Bridge FC committee, led by club chairman Stephen O’Flynn and secretary Richie Tobin. Heading up a hard-working committee of 15, they have spearheaded a daunting job of work which recently culminated with the club opening their Premier League campaign with a 2-2 draw against Peake Villa back at ‘The Lane.’

Club chairman Stephen heaped praised on the committee. “In fairness,” he said, “we have a very proactive committee and the fact that we have on board  the likes of Seamus Healy, TD, and Ken Horne, chairman of the Old Bridge Community Association, has  been a tremendous help to us and we are thankful to the Community Association for their assistance and indeed their donation to the club also.” 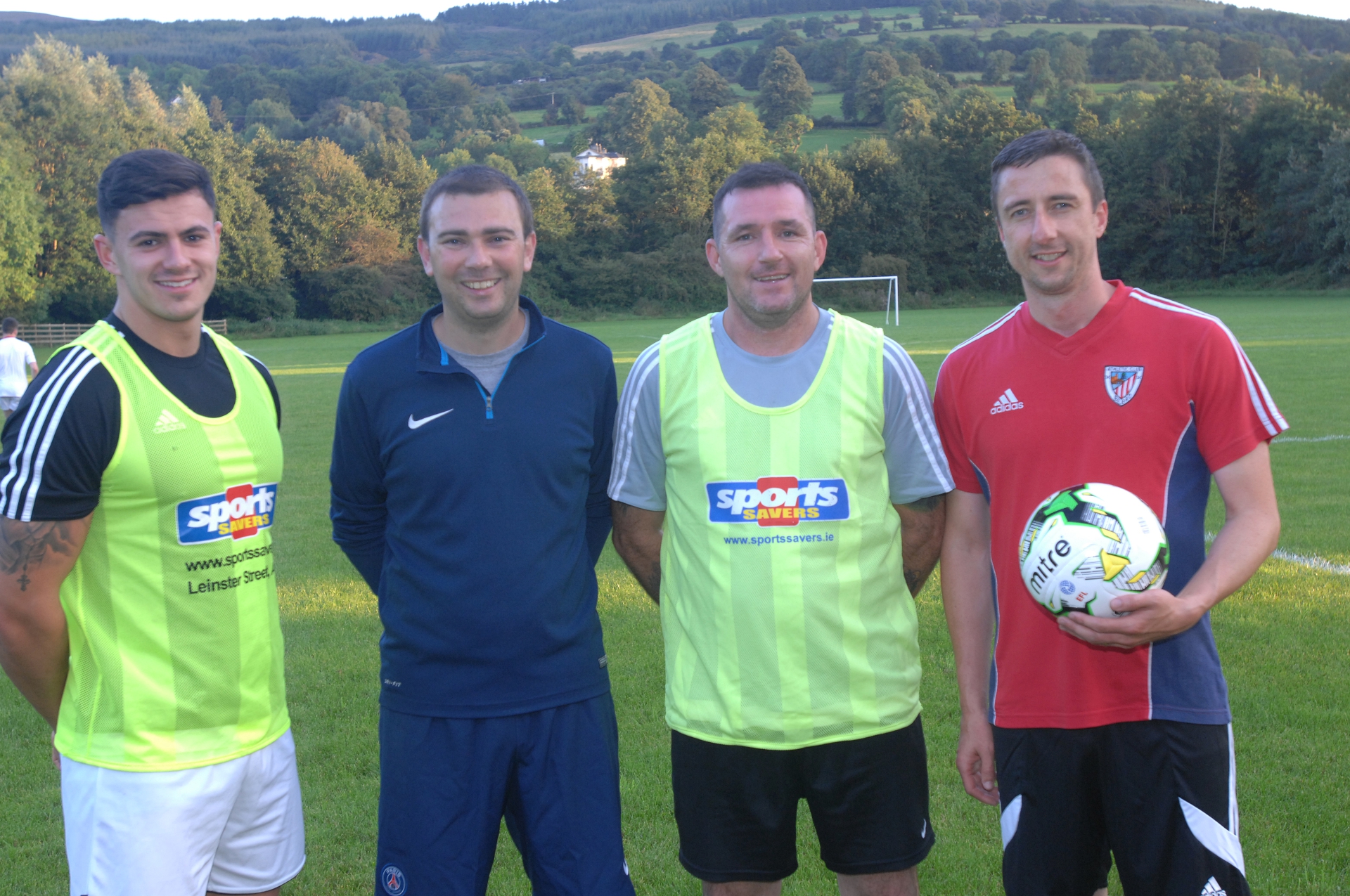 Secretary Richie Tobin, who by his own admission thought the club were “absolutely insane” initially to take on the huge task, is now delighted with the outcome for many reasons.

“A big part of what we wanted to do was to bring the football club back into the community over here, it was missed over the past number of years. The Bridge people love their football and love coming over on a Saturday or a Sunday morning to watch a game. For a lot of them it wasn’t possible to get down to Ferryhouse and the club suffered as well with no fans watching which could be a bit demoralising for the players,” added Richie.

Another plus of being back at Green Lane is now sorted, according to the club chairman Stephen.

“One of our main problems was that we couldn’t attract new players because we didn’t have our own facilities. For the last two years travelling away from home in the Premier League was very hard on all the players, but we are now attracting attention again,” he added.

Richie Tobin then went on to say:

“When we sat the players down two years ago to tell them that the TS&DL wanted us to play all our games away from home we knew it was a huge ask of them to travel to every game. But the choice we had was to play all the games away from home or play in Division 1. The players responded magnificently, and we have held our own in the Premier League since, and that says something about the spirit of this club.”

“We want to get a youths team up and running, an under 18 team back playing with ‘The Bridge’. The Old Bridge has always had a strong tradition of youths football. But it will take time as we will have to financially support both teams separately and that takes doing,” added Richie.

This point which was immediately seized on by Old Bridge Community Association chairman Ken Horne.

“That’s one of the reasons we want to back this club as a community; we needed something like that. We needed to get something for the kids of the Old Bridge," he added. 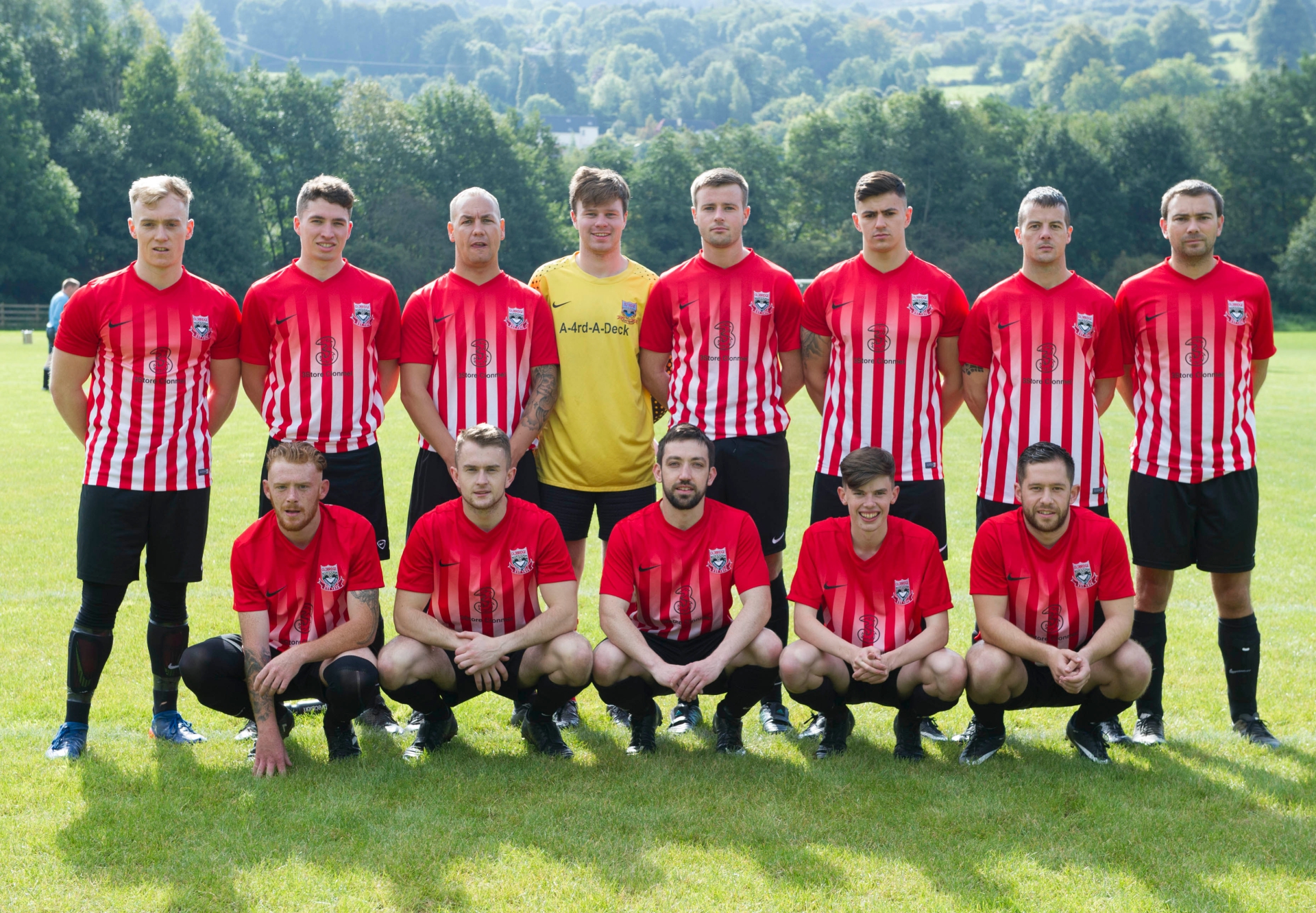 “Now because of the nature of the way the estates are set up there are few green areas about. So if we can find something to give the youth of the Old Bridge a focal point and something to aim at, it is all positive,” added Ken.

Community Association treasurer and Old Bridge FC committee member, Deputy Seamus Healy, said he too was impressed with the commitment and enthusiasm of the club.

“Two years ago the club knew they needed to do something or fold. They gave a call out to the people in the Community Association to come on board and they responded big time with support and also gave the club a contribution. The  support of the Association has been a huge help to this soccer club,” added Seamus Healy.

According to Ken Horne, “We went down to a couple of meetings of the club, myself and Seamus. We saw there was a great commitment there so that’s when we said we would throw a few bob in and then low and behold the lads asked me to go on the committee with them. It was only when we saw the enthusiasm of the committee that we were very happy to get stuck in behind them. It was very evident very quickly that they were serious,” said the Community Association chairman.

Reverting back to the football side of things, Old Bridge FC secretary Richie Tobin went on to say “We have all our players signed now for the coming season and Noel (team manager is Noel O’Brien) is happy with his squad of 25 players or so. We drew our first game with Peake Villa. Beforehand we would have been happy with a draw but as the game went on we felt we could have won it but a draw was fair enough. We were beaten the second day by St. Michael’s, but in fairness St. Michael’s are on a different level than everyone else this season, no doubt about it. They will be trying to win everything this year. We were also disappointed to lose against Glengoole United, it was disappointing but these things happen,” added Richie. 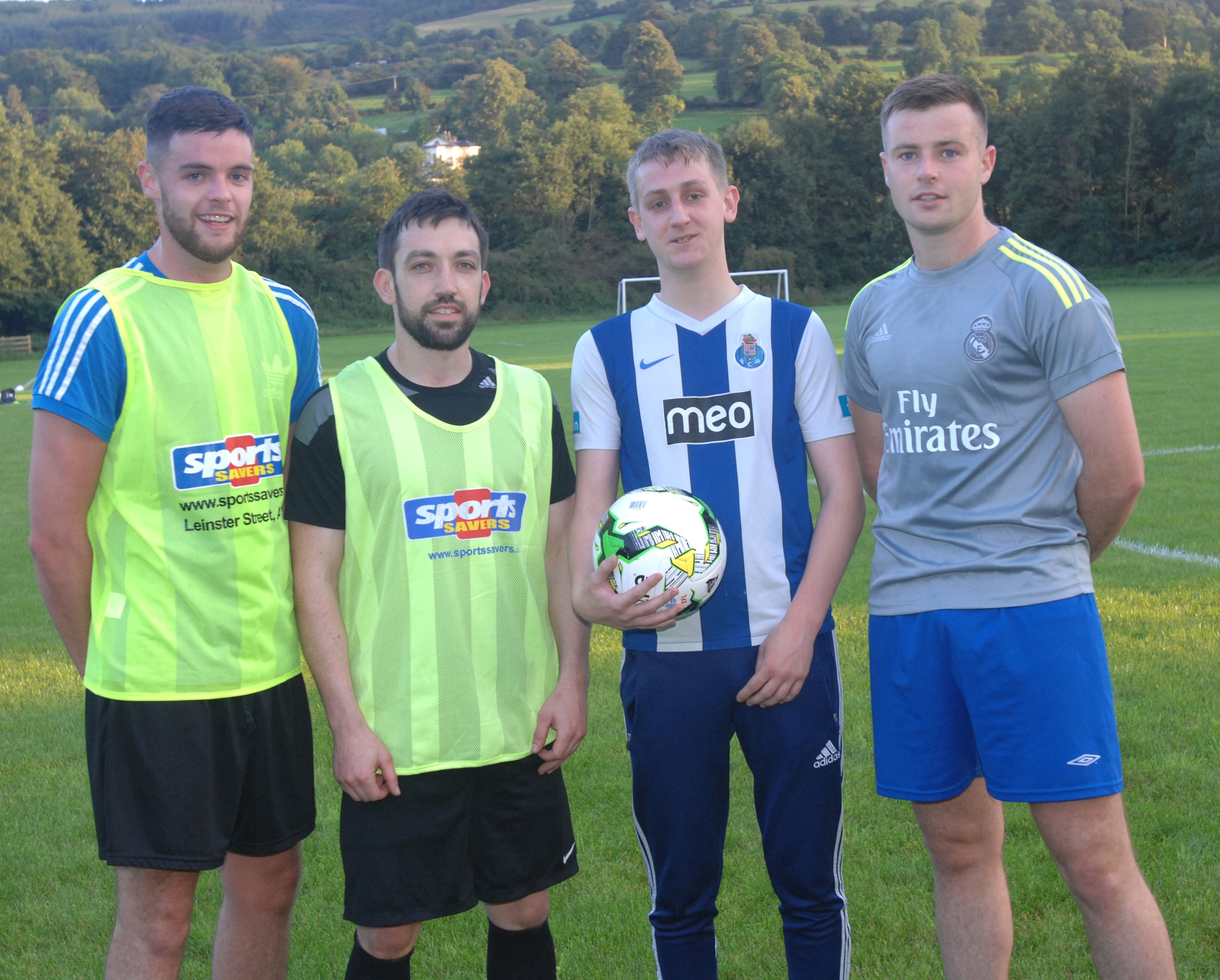 Old Bridge FC players Stephen O’Reilly, Brendan Boland, Danny Hogan and Aaron Arrigan take a break from a training session at Green Lane to which the club has returned this season after an absence of 15 years.

“We want to move on to the next stage of the development of the club and the grounds now, and decide what else do we want to do” added Richie.

“We want to try and get electricity up to the pitch now so that the lads can train during the winter, put ball stoppers behind the goal, stuff like that. And on the playing side we now want to start really competing now that we have a base and and are finished with the travelling away for every game. This club is a work in progress and will be a work in progress for many years to come,” concluded Richie.

On the club’s future plans the chairman Stephen O’Flynn said “Firstly we want to consolidate our position in the Premier League this year, our first year back at Green Lane. But we will continue with a programme of development and fundraising to help with our plans for the future. We were very fortunate in the past year with some great fundraising ventures such as the Darts Night, the Sponsored Walk, the ‘Last Man Standing’ which all helped and we hope to repeat. But our biggest source of funding by far was the Golf Classic at Clonmel Golf Club. And I would like to thank the Golf Club, and in particular golf club captain Billy Hewitt for all his assistance beforehand and indeed on the day,” concluded Stephen. 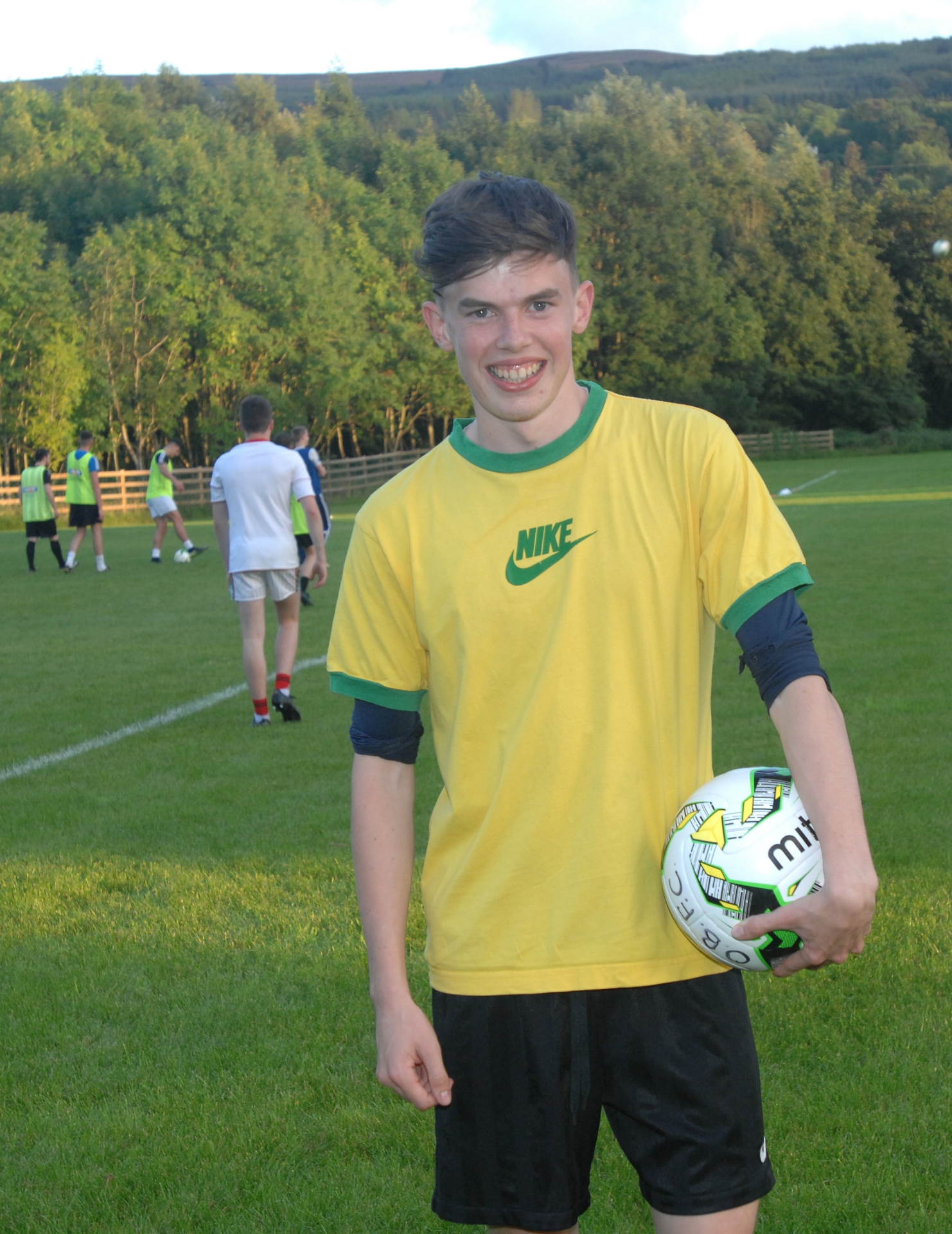 Old Bridge FC captain, Jack Kennedy, who had the honour of scoring his club's first competitive goal back at Green Lane in their recent game against Peake Villa of Thurles.

The Old Bridge FC would like to thank all the following for their tremendous support in helping them to return to Green Lane.

Thomas Cooney, Contractors, Clerihan, for all the groundswork;

Ian Prendergast for all the works on pathways, etc.;

Clonmel Cricket Club for supplying a 40' container which is now the home dressingroom;

Clonmel Plumbing for the supply of all materials at cost;

Elys Centra, Old Bridge, for sponsorship and continued support of the club;

and finally the Tipperary Southern & District League for their assistance with this project and for their ongoing support.