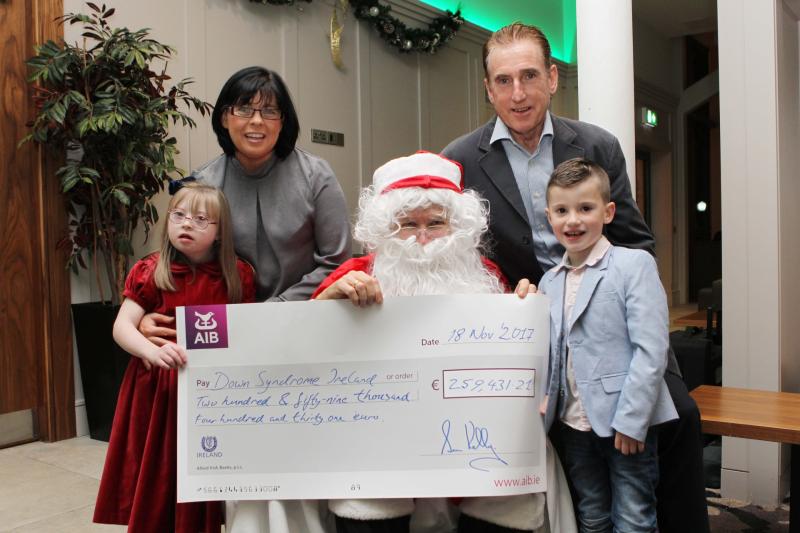 This year’s Tour de Munster charity cycle has once again exceeded all expectations, and the phenomenal total of €294,637.65 raised this year brings the total raised for the Munster branches of Down Syndrome Ireland since the partnership began above the €2.1 million mark.

This is the eighth successive year that DSI has benefitted from the popular charity cycle, which was first established in 2001. A new addition to this year’s Tour de Munster was the option for cyclists to select their own beneficiary and raise funds and awareness for it. The incredible sum raised was announced, and a cheque presented to DSI and individual beneficiaries by special guest, cycling legend Sean Kelly at a special celebratory event attended by cyclists, branch members, and their families at Clayton Hotel Silver Springs in Cork on Saturday, November 18th. 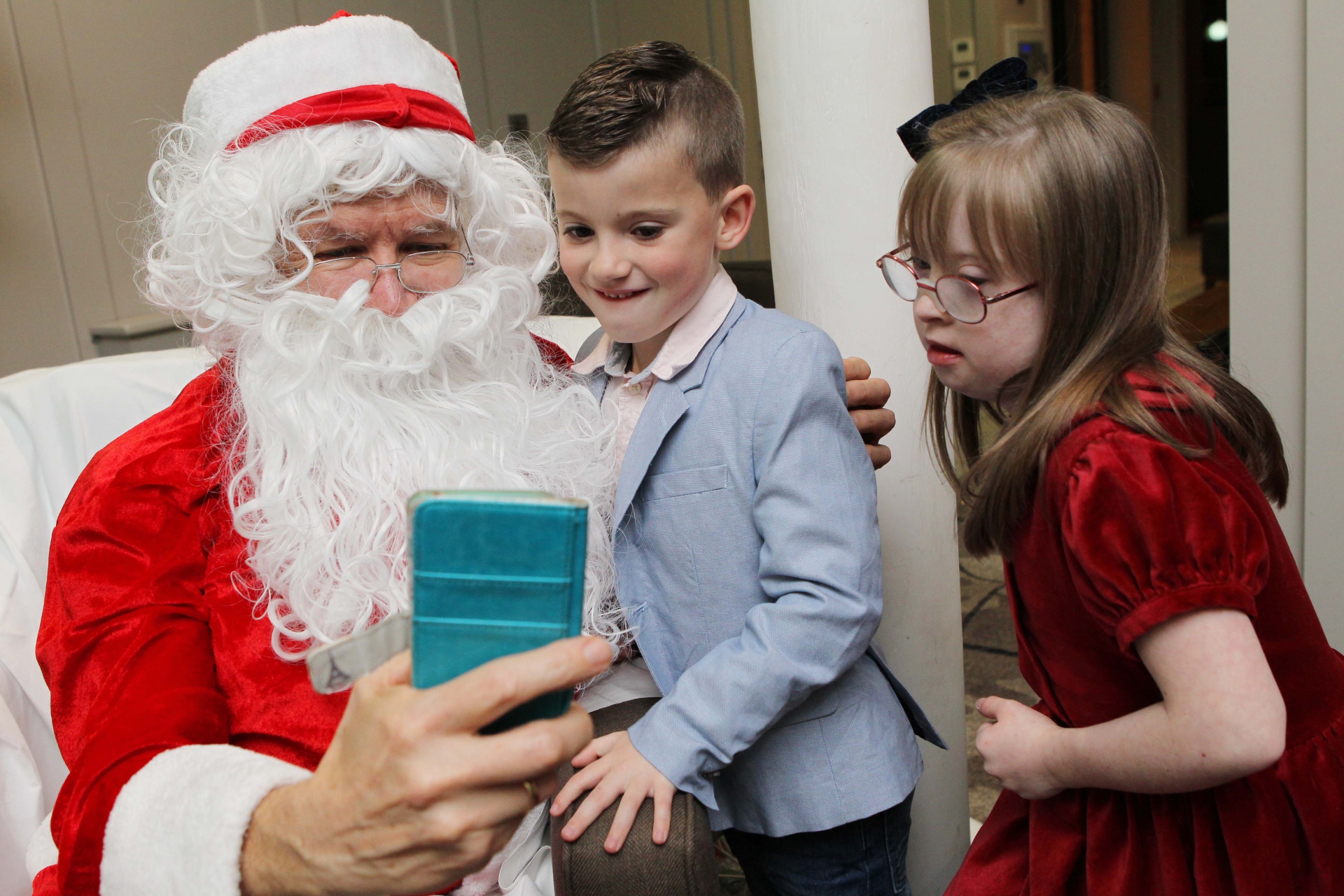 Pictured with Santa Claus are cousins William Quinlan, 6, and Maya Gillick, 9, from Nenagh at the Tour de Munster 2017 cheque presentation

This year’s charity cycle saw 100 amateur cyclists travel over 600km through the six counties of Munster from August 10th – 13th, supported by friends, family and the many volunteers who fundraised along the route. Each cyclist covered their own expenses, so all funds raised go directly to DSI and the individual beneficiaries.

Sean Kelly, a dedicated supporter of Tour de Munster, once again took to the roads of Munster with the group for the full four days of the Tour, covering an average of 150 km per day through the beautiful towns and villages of Cork, Waterford, Tipperary, Limerick, Clare, Kerry.

Since its inception in 17 years ago, Tour de Munster has raised over €2.5 million for its beneficiaries, with over €2.1 million for DSI alone. Paul Sheridan, who established Tour de Munster, could not be prouder of the Tour and its many participants over the years. Speaking at the cheque presentation, Paul said “We are over the moon to have surpassed the €2.1 million mark for the Munster branches of Down Syndrome Ireland. Over the past 17 years Tour de Munster has raised over €2.5 for many great charities, a sum which we are very proud of.

“2017 was another great year for Tour de Munster and to have raised such an incredible amount of money for DSI’s Munster branches as well as a number of individual beneficiaries is fantastic. None of this would be possible without the dedication and determination from cyclists and volunteers. We are very grateful to the many companies and the public who have supported the Tour in the past 17 years, in particular this year’s main sponsor, Nightline Delivers, who year after year join us on our epic journey.” 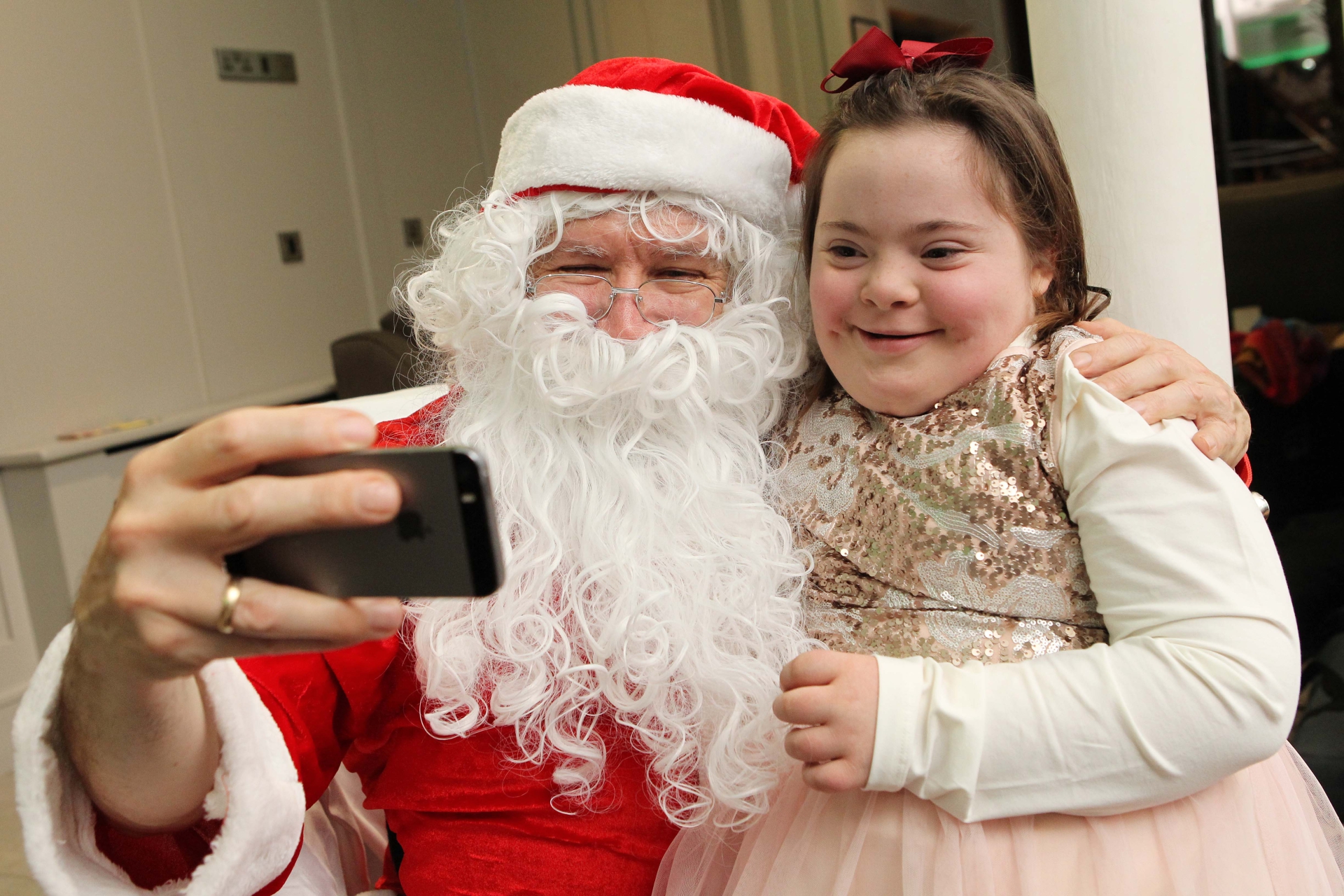 Each DSI branch in Munster will receive a share of the money raised to fund services for people with Down Syndrome. Thanking all those who supported Tour de Munster this year, Phil Keohane, Tour de Munster Branch Liaison Officer, and cycle participant said “Tour de Munster has been an amazing experience and journey for everyone in Down Syndrome Ireland. So many friendships have been formed between the organisation, the families and the cyclists. The tremendous fundraising work and awareness campaign improves the lives of so many Munster families, and this is what makes Tour de Munster so special. I’d like to thank all involved for their incredible dedication and hard work. DSI families, staff, and the DSI community will be forever in your debt.”