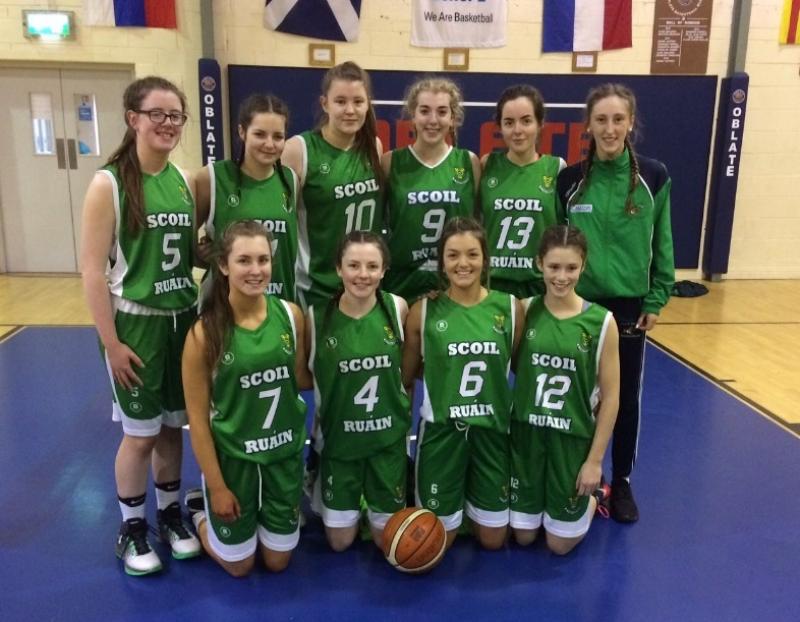 It was a tough week for the Senior Basketball team at Scoil Ruain Killenaule after narrowly missing out on a place at the All Ireland final following a fiercely contested game against Loreto Stephens.

A dedicated Tipperary side were defeated by a mere seven points as Dublin's Loreto Stephens edged out in front, despite Grainne Horan and Eimear Lanigan having the games of their lives.

On Saturday the school hosted the League All-Ireland playoffs but unfortunately came up against a stronger Blarney side who went on to dominate the entire game's play.  In a nail-biting game, Scoil Ruain gave it their all but Blarney were clinical with three pointers when they needed them and finished five points ahead. It was a hard loss despite a game high 14 points for Meibh Maher after being sick all week.

It was the last games for Grainne, Lauren & Lisa after giving 6 great years to Scoil Ruain Basketball. Thanks girls for your dedication & energy, you will be missed. Thanks to all the staff & students who helped out during the playoffs especially Liam & Lucy for all their help. pic.twitter.com/4HkrdsPXY8

Scoil Ruain had a great win over Muckross Park of Dublin 36-24 with Grainne Horan scoring a game high 18 points. The team as a whole played exceptionally in the last game against Tarbert, winning 67-42 with 19 points each from Meibh and Grainne Three futher baskets made from the three point line from Lisa Millerick in the second quarter was also inspirational. Despite this great win Blarney were undefeated so went through as winners.

The school wishes to pay special thanks to the team for their dedication and energy, along with staff and students who helped out during the playoffs, and in particular Liam and Lucy for all their help.