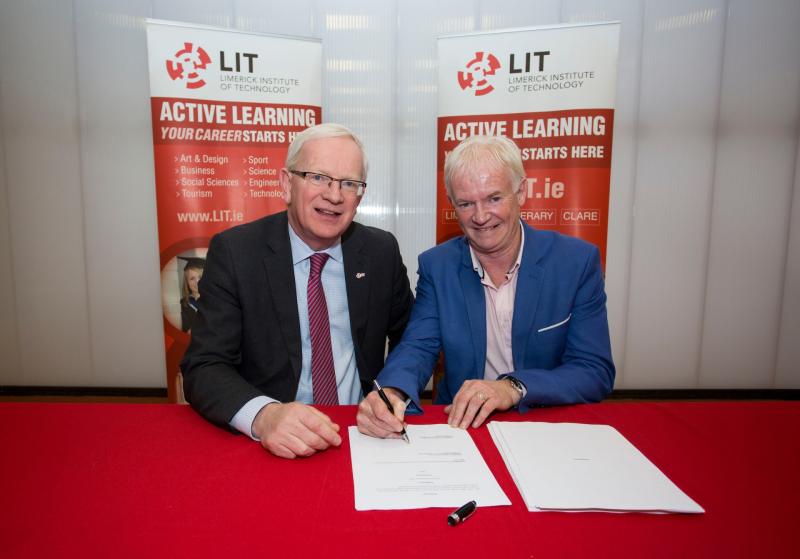 Vincent Cunnane, President of LIT and John McNally sign the agreement this week.

Six indoor clay courts will form the centrepiece of this magnificent proposal which will be capable of hosting national and international events all year round.

A red letter day for Thurles Tennis Club has been declared as the announcement of collaboration with LIT will bring the dream of a state-of-the-art facility for the Cathedral Town, closer to reality.
The significance of Thurles as one of Ireland’s most important sporting locations will be greatly enhanced, as LIT and Thurles Tennis Club have now signed an agreement to develop a unique tennis facility at LIT’s Thurles campus. The proposed multi-million Euro development also has the full support of Tennis Ireland and its Munster Branch.
Comprising six indoor clay tennis courts in a new tennis dome, together with spectator seating, new changing areas and club rooms, the new facility will be the only one of its kind in Ireland. It will position Thurles as a major centre for tennis both nationally and internationally, providing both a new focus for participative sport for people of all ages, as well as capacity for high-level competition.
The new tennis development will be co-located with LIT’s existing 2,000 square metre, €3.7 million, Sports Lab, adding further to one of the country’s leading sports facilities. Already sports clubs, teams and personalities from across a whole range of disciplines are using Sports Lab including the likes of Arsenal FC, golfer Padraig Harrington and the Wales rugby team.
After much behind the scenes efforts, talks and negotiations, work is now expected to begin on the new facility in 2019, with the first courts coming on stream in 2020.
President of LIT, Professor Vincent Cunnane commented, “I am delighted to welcome this agreement and wish to congratulate and thank all those in Thurles Tennis Club, the Munster Council and Tennis Ireland who worked so hard to bring it to fruition. This is a major development on a number of levels.
“Effectively, it means that a national and international centre of tennis excellence is going to be located at LIT’s Thurles campus.
“For people in the region, it puts a major facility right on their doorstep. For tennis players in Ireland and beyond, it puts Thurles on their map,” he said.
“LIT is all about collaboration, and this project shows how collaboration can really deliver international impact at a local level. LIT’s Thurles campus is increasing its impact as a sports facility of choice for athletes and teams performing at the highest level in their sports, bringing benefit to Thurles, Munster and the country as a whole,” added Professor Cunnane.
“We in LIT will be doing all we can to ensure the prompt completion of the new development.” Pictured at the launch are Vincent Cunnane, President of LIT and John McNally of Thurles Tennis Club, with students of the Ursuline Secondary School in Thurles.

John McNally, of Thurles Tennis Club said, “This is a unique and exciting opportunity for Thurles and the surrounding area and will be a major boost to the local economy. There is a huge appetite for tennis in Thurles. The mission of Thurles Tennis Club has been to provide a top-class facility to accommodate year-round tennis for young and old to enjoy, whatever the weather, and this new development will certainly provide that.”
“And who knows? In the years to come, the next Andy Murray, Roger Federer, Venus Williams or Serena Williams could come out of Thurles!”
Former President of the Munster Branch of Tennis Ireland and the Branch’s Project Liaison Officer Shane Cooke paid tribute to LIT, members of Thurles Tennis Club and the Munster Branch of Tennis Ireland not only for their vision, but their work in developing the plans for Ireland’s first indoor clay court facility.
"Munster Tennis are delighted to be associated with such an important project for tennis in Tipperary, Munster and Ireland in general. The facility will be perfectly located, adjacent to the existing world class strength and conditioning facility at LIT Sports Lab. This will allow high performance players to avail of the state of the art facilities and knowledge of the Munster High Performance Centre, while also training on Ireland’s premier tennis clay court facility."
“We look forward to many important events being held at the venue and are also excited by the prospect of a renewed, vibrant tennis club in Thurles with increased participation in tennis by the staff and students of LIT,” he said.
Thurles Tennis Club will be holding a number of fundraising initiatives in the coming months to help meet their commitments to the project. More about these events in due course.