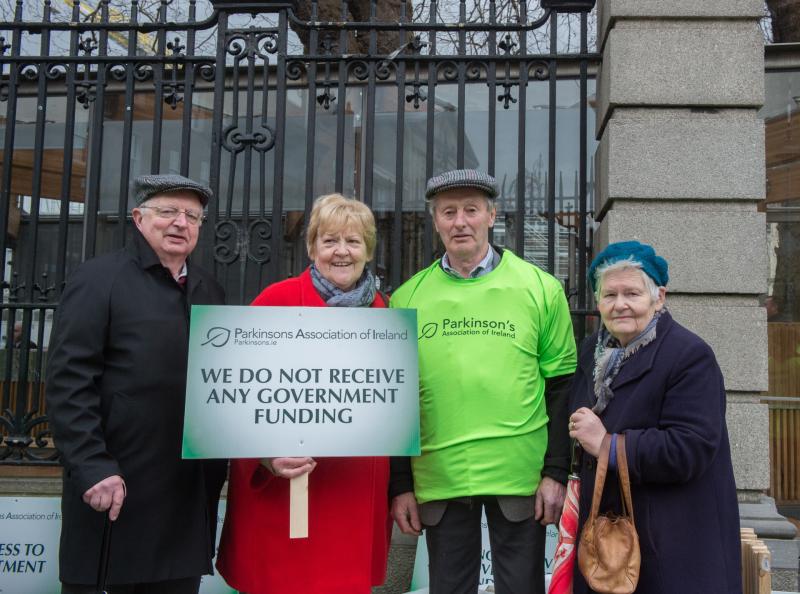 Members of the Tipperary branch of the Parkinson's Association attending the protest (L to R): Michael and Marion Burke, Leslie and Ian Blackwell

Members of the Tipperary branch of the Parkinson's Association have called on improved services for patients at a protest organised outside Leinster House on Thursday.

The protest, which was attended by Parkinson's Association members from all over Ireland, was organised to highlight the lack of nurse specialists available to the estimated 12,000 sufferer's of the degenerative disease in the country.

Presently the organisation receives no core funding from the government despite supporting an estimated 12,000 people living with the degenerative neurological condition. The charity currently operates 18 branches around the country, as well as a free phone helpline which provides information and also offers a call-back service from a Parkinson’s Nurse Specialist.

PIC: Parkinson's Association members protesting outside Leinster House in an effort to get government funding and Parkinson's Nurse Specialists around the country

During the protest, a petition signed by 11,000 people calling for a nationwide network of nurse specialists for people with Parkinson’s disease was presented to the Minister for Older People, Helen McEntee.

The National Collaborating Centre for Chronic Conditions guidelines state there should be one Parkinson’s Nurse Specialist for every 300 patients, putting Ireland way below the recommended number. At present there are only five specialist posts for the entire country and one of these is vacant. Another position is part-time and one is funded by the Parkinson’s Association.

Outside of Dublin, the only two full-time Specialist Nurses are based in Limerick and Galway with none at all in Cork, the south east, Kilkenny, the rest of Leinster, the midlands or the border region.

“Parkinson’s is the second most common degenerative neurological condition after Alzheimer’s, yet the health services for people here are not as good as in many other EU countries. We could do so much more if we had some funding,” said Chief Executive Paula Gilmore.

“We could expand the Nurse Service nationwide. We could put more structures in place, helping branches at local level, and we could increase the publications we provide.”