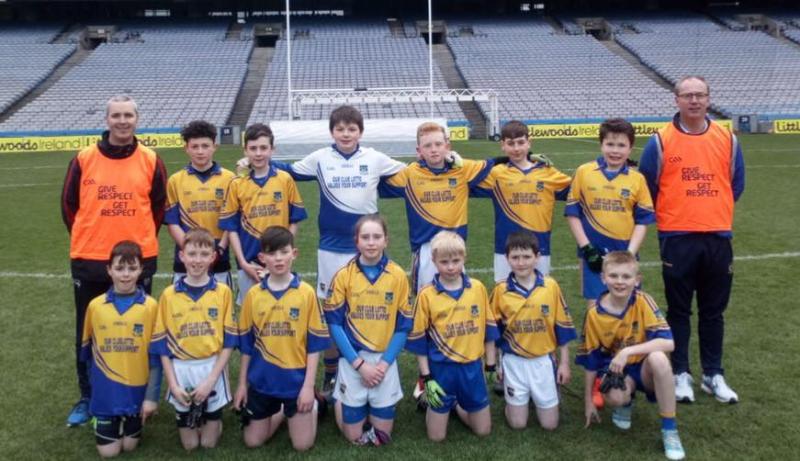 A group from Ballylooby Castlegrace club togged out and ready for action in Croke Park yesterday.

The players hope to return again some day wearing the blue and gold of Tipperary.

A number of very excited Tipperary juvenile GAA players were part of a special day in Croke Park yesterday for the Go Games Provincial Days series. The players got to realise a dream and to play on the hallowed turf of Croke Park where they all hope to return in years to come in the blue and gold of Tipperary.

Littlewoods Ireland will be part of this once-in-a-lifetime opportunity to give children all over the country the chance to play in Croke Park Stadium. The initiative saw over 4,000 children from Leinster and Munster take part in mini versions of hurling and football blitzes at Croke Park over the course of a week during the Easter holidays. This unique occasion was something that all young GAA players dream of from the moment a child watches an All-Ireland Final on the television or picks up their first hurl.

Ahead of the launch, Littlewoods Ireland released a video on their Facebook and Twitter channels with ambassador Jackie Tyrell who is no stranger to Croke Park having won eight All-Ireland titles on its hallowed ground. The video shows Jackie painting a picture of what Croke Park means to him, the rush of playing in the stadium, the highs and the lows and the first time he stepped out on to the iconic pitch. Austin Gleeson and Anna Geary pictured at the launch.

Speaking at the event, Fiona Lee, Marketing Manager of Littlewoods Ireland said “Littlewoods Ireland is delighted to be partnering with the GAA again for this year’s Go Games Provincial Days. We are extremely excited to welcome the future intercounty players of Ireland to Croke Park for a match day experience they will never forget. Croke Park is an iconic and significant venue for GAA fans all over the world and giving children the opportunity to play in this stadium is something we are thrilled to be involved in.”

She went on to say that: “The GAA is at the heart of every community in Ireland and the Go Games has been an incredibly powerful platform for encouraging young people to participate and enjoy Gaelic games around the country. We are bringing some innovation through our new Littlewoods Ireland Studio which will be giving children the chance to step into their idol’s shoes and experience life as an intercounty player.”