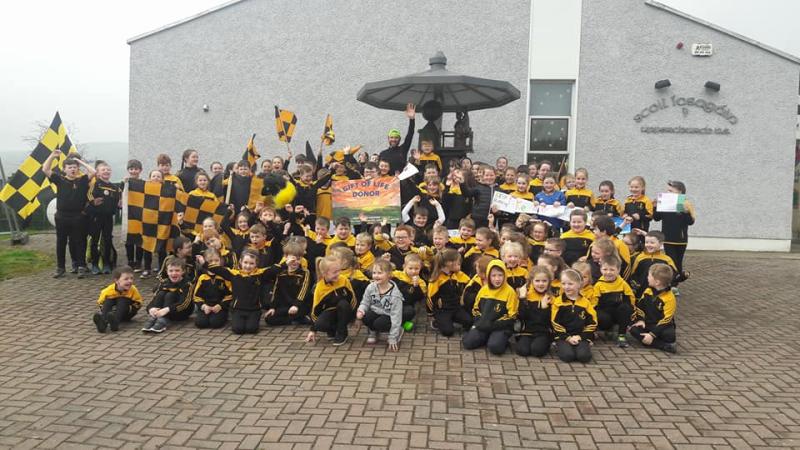 A Dublin man who was told he may “never run again” is breaking records by being the first person ever to take on a grueling 930km 'Ireland Way' challenge to promote Organ Donor Awareness.

Ultra runner Don Hannon was given a hero’s reception in Tipperary earlier today after completing over 600km of the demanding trial when he stopped by Upperchurch NS this morning to rapturous applause.

Hannon, who donated half of his liver to his sister Therese in 2016, set himself the ultimate challenge to cover 930km (578miles) over 14 mountain ranges to encourage people to become organ donors. Along the way, Don is also aiming to distribute 1,000 organ donor cards to "anyone he meets" to encourage members of the public to sign up as card carrying donors.

"My sister has a rare disease.  Primary biliary cholangitis (PBC). Much like other forms of liver disease, PBC permanently damages the liver as tissue is replaced with scar tissue. As more scar tissue develops, the structure and function of the liver are affected. The exact cause of PBC is unknown. There is no cure," explains Hannon.

"This was my sisters second transplant and without my liver being donated the reality is that she would not be alive today.  This is the sad truth with people waiting for a donor. There’s not enough people registered as donors and so people die waiting for an organ," he adds.

Following the life saving operation, Hannon promised his sister he would take part in a run to raise awareness for organ donation leading to the 'Running the Ireland Way' challenge, where he aims to complete 930km (578miles) over a 12 day period.

Despite a slight injury to his ankle in Roscommon, Hannon is on course to complete his challenge in the next four days when he touches down at his final stop in Castletownbere, Co Cork.

Supporters can follow Hannon's progress on RunningDonor.com and live track his progress here.