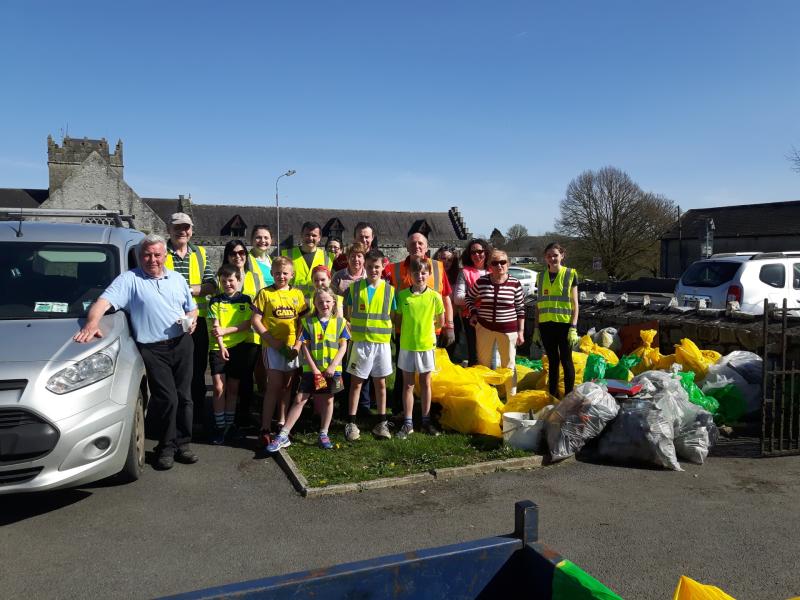 Some of the volunteers from Holycross pictured with a portion of the bags of rubbish collected.

Holycross and Ballycahill Tidy Villages and Domhan Glas ( Enviromental group Holycross / Moycarkey/ Ballycahill) welcomed 90 volunteers in glorious sunshine at the weekend for a Spring Clean of the approach roads to the picturesque villages.

The approaches were treated to a deep clean by the volunteers who donned the high viz vests and gloves as they went about their business with great gusto. The event in Holycross had been launched by Tipperary hurler Cathal Barrett and more than two hours later the bags were brought back to the Community Centres with more than 150 gathered from the grass margins and ditches.

Some of the collectors who participated in Ballycahill village.

The Spring Clean was organised by the Tidy Villages Groups in Holycross and Ballycahill  villages in conjunction with local organisations including Holycross Ballycahill GAA club which took a lead in the event. It is hoped to make the event an annual one in Holycross.

Young and old alike were on hand to lend a hand and the fruits of their labour was seen afterwards when all the rubbish bags were collected and disposed of.

Paddy Hayes and Johnny Gleeson readying the bags for disposal after the event on Saturday.