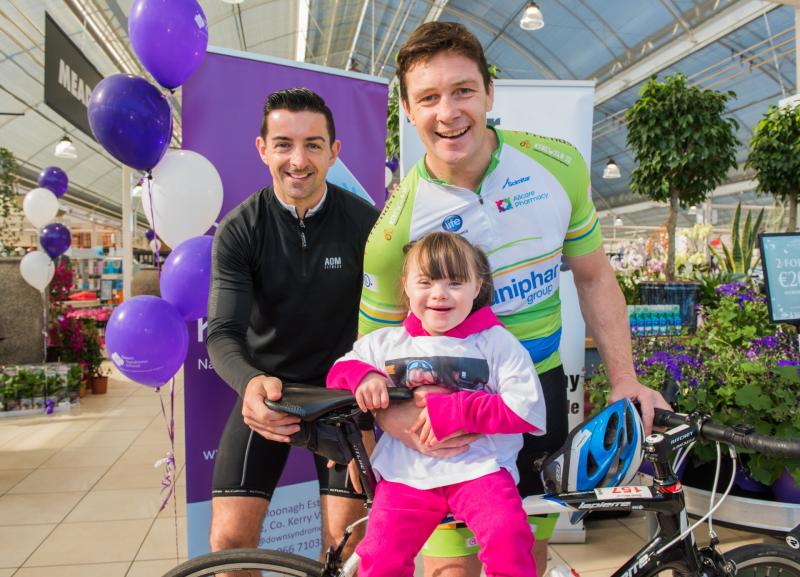 Tour de Munster, the annual charity cycle entering its 18th year this August, will once again “share the journey” with Down Syndrome Ireland (DSI) Munster Branches for the 9th consecutive year.

The partnership announcement took place at the ‘Unsung Hero Charity Cycle and Family Fun Day’ at Ballyseedy Home & Garden Centre in Tralee, held in association with the Kerry Branch of Down Syndrome Ireland, and was attended by cyclists, friends, families, and some famous faces connected to DSI. The 600km annual charity cycle, which this year takes place from Thursday 9th – Sunday 12th of August, will see an estimated 100 -120 cyclists make their way around the six counties of Munster, raising funds for DSI Munster branches.

Since its inception in 2001, Tour de Munster has raised over €2.5 million for its beneficiaries, with over €2.1 million for DSI alone, with a staggering €294,637.65 raised in 2017. All cyclists cover their own expenses. Cyclists also have the option to select their own beneficiary and raise funds and awareness for it. Fundraising can include personal sponsorship, but also commercial sponsorship, whereby a sponsor logo placement will accompany a donation attracted by that participant.

DSI Kerry’s ‘Unsung Hero Charity Cycle’ paid homage to renowned explorer Tom Crean and also remembered DSI Kerry member, Emily Keohane who sadly passed away last year. The cycle saw cyclists going west through Camp where some opted to tackle Caherconree, before lunch in Annascaul at Tom Crean's former pub, the South Pole Inn. The cycle then continued on to Inch Beach and Castlemaine, before heading back to Ballyseedy to enjoy lots of music, food and fun. All of the cyclists on the day were entered into a draw which saw one lucky cyclist win a weekend stay in Tom Crean's refurbished home in Annascaul, kindly offered by his grandson Enda O’Brien. Speaking at the event, Madeleine Rose Doyle of DSI Kerry echoed the delight of DSI Munster branches on once again being named as the charity partner for the Tour, commenting “We are delighted that DSI Munster branches have been chosen as the main beneficiary of the Tour de Munster charity cycle once again this year. The support and funds raised over the past eight years has been phenomenal and to see the total funds raised for DSI Munster branches hitting the two million mark last year was amazing. These funds make a tremendous difference to the lives of people with Down syndrome in Munster, by providing vital services and facilities in each county. We are truly grateful for the support from so many people along this journey.”

Madeleine also paid special thanks to Ballyseedy Home & Garden Centre, adding “We can’t thank Nathan McDonnell and his team enough for their continued support and generosity over the last number of years. They have played a huge part in making today such a success and we couldn’t have done it without their backing.”

Paul Sheridan, who established Tour de Munster, is looking forward to another successful year with DSI Munster branches as its main beneficiary, added “It’s fantastic to see so many people here today supporting DSI, and is credit to the hard work and dedication from DSI Kerry and Ballyseedy Home & Garden Centre for making this the special day that it is. Over the past eight years, the commitment from the cyclists and DSI volunteers has been truly incredible.”

Paul continued, “It’s at events like today’s, where we meet these wonderful children and adults, that we are reminded of why we do what we do. We are also very grateful to the many companies and the public who have supported the Tour over the past 17 years, and we hope they come out and show their support again this August.”

This year’s Tour de Munster begins on Thursday, August 9th in Cork City and continues over four days around the six counties of Munster, until it culminates back in Cork on Sunday, August 12th.

For further information on Down Syndrome Ireland please see www.downsyndrome.ie.