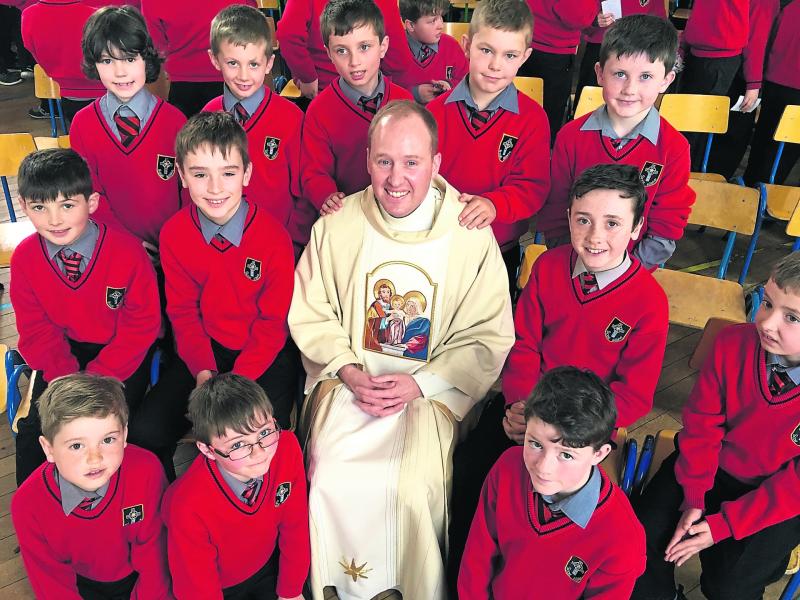 Fr Niall O'Riordan pictured with some of the boys of Scoil Ailbhe.

Twenty five years after he sat in Scoil Ailbhe CBS primary school, former vet returns to celebrate Mass with the students and staff.

Scoil Ailbhe in Thurles, welcomed back one of its many distinguished past pupils this week, when recently ordained Fr Niall O'Riordan celebrated a very special Mass for the pupils, current and retired teachers and staff, parents and friends of the CBS primary school.

It's twenty five years since Fr Niall sat in the desks of the school and it was a very emotional return to his alma mater for the Rathmanna man, who was ordained on December 8th in the Basilica of St Paul Outside the Walls in Rome, having first embarked upon a career in veterinary after leaving school.
There have been many special occasions in Scoil Ailbhe through the years, especially when former pupils returned – many of them having achieved noteriety in sporting spheres. However, the atmosphere in the school hall, where Fr Niall performed in many school concerts during his time there, on Tuesday morning last, was indeed remarkable.
No words could really do justice to the serene reverance and respect which permeated the gathering.Fr Niall spoke with such direct simplicity, that he captivated the children and adults alike, with his gentleness, his encouraging message and his many stories.
His devotion to Our Lady was emphasised and he would have recalled reciting the Rosary on the school corridors during the month of May as he journeyed through the school from 2nd class to 6th class. How very lovely it was then, to see his former teachers in attendance alongside many of their retired colleagues, including former Principals Br Michael Keane, Mr Flan Quigney and Mrs Miriam Butler, and Fr Niall's parents Dan and Imelda.
Fr Niall described his 2nd class teacher Mrs Breda Audley, who was in attendance, as being like a second mother to him. Mrs Marette Dunphy, Mr Eamon Sheppard and Mr Micheál Burke were also present and fondly remembered ,as were Mrs Alice O' Brien represented by her husband Antoin and Mr and Mrs Muiris and Dolly Ó Cléirigh, all of whom were teachers in the school during Fr Nialls time there. Under the superb chaplaincy of Fr Vincent Stapleton and the strong ethos of Edmund Rice in Scoil Ailbhe, spirituality and faith are no strangers to the Scoil Ailbhe boys, something which Fr Niall complimented highly in their immense attentiveness and reverance throughout .

Special mention must go to the school choir and instrumental musicians.To say they enhanced the ceremony, would be a complete understatement.This group of boys knit the entire ceremony in a weave of harmonies and the truest of choral voice.
Accompanied by Sr Edel and Sr Brigid, and Brother Cordinian, who will be ordained in December, of the Order of Mary, Fr Niall, who is now based in Slovakia, presented each child with a gift of a Rosary Beads and a prayer.
He was joined on the day too in Scoil Ailbhe by a num6ber of his classmates, some of whom had travelled to Rome to be by his side for his Ordination. And, the message was quite clear from Fr Niall – friends made in primary school can be your friends for life.

At the conclusion of Mass, the quiet, calm atmosphere was replaced, as the entire attendance rose to their feet and accorded their past pupil a lengthy and rousing standing ovation. Fr Niall, the epitome of sincerity and humility, was overcome with the gesture and was thrilled that so many boys came to shake his hand and have a word with him, as they exited the hall.
School Principal, Brid Ryan, described the morning as being 'most unique and special' and said that the boys of Scoil Ailbhe will remember it long after they have left the school and are making their own paths in life.
“In Scoil Ailbhe, we never really let go of our past pupils. We are continuously watching out for them, wishing them well, hoping they make good choices,achieve their potential and become good people within the community. That is the reason we are so proud to welcome back Fr Niall today ,because he represents the ultimate role model for boys. He worked really hard in school; he valued his childhood friends; he was involved in healthy hobbies; and he kept the faith which was instilled in him at home and in school. Ultimately, Fr Niall by following his heart , has found true happiness”
Blessed Edmund Rice must have be smiling down very proudly on the school as it basked in this lovely faith filled morning .
Before departing, Fr Niall took time to walk around the school yard where many fond memories of his very happy and formative years came flooding back.
In truth, this day was indeed a stand out one, in the famed history of Scoil Ailbhe.
Pictured above: Fr Niall with some of the pupils of Scoil Ailbhe.