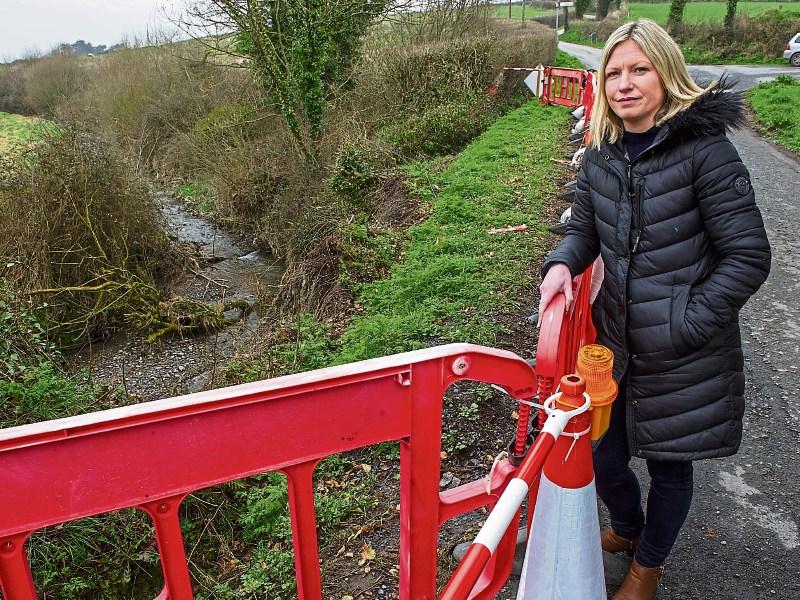 A section of pot hole ridden rural road between Fethard and Drangan that collapsed during heavy rainfall last month poses a serious risk to motorists, says a local councillor, who is urging the Council to prioritise it for repair.

Fine Gael Cllr Louise McLoughlin described the road that passes through the townlands of Everard's Grange, Curraheen, Rath-kenny and Tinakelly as the most damaged road she has come across this year.

She tables a motion at yesterday (Thursday's) meeting of Carrick-on-Suir Municipal District councillors appealing to the Co. Council to prioritise this road for remedial works.

The road is riddled with potholes but the section of most concern is a 20m stretch at Rathkenny where the roadside ditch and embankment has collapsed leaving a dangerous  drop of about 4m    to a stream.  The collapse happened during the day of torrential rain in early March when the road was seriously damaged by streams of water cascading over its surface.

Part of the ditch straight across the road also appears to have collapsed but the Co. Council insists that is not the case.

The Co. Council has erected safety barriers and bollards where the collapse has occurred and has filled in some potholes along this stretch of the road. But Cllr. Louise McLoughlin says local residents are still fearful a car or tractor will plunge down the embankment into the stream below.

"They are very worried. They are afraid of their lives that someone will go in over it," she told The Nationalist. "This road has to be made safe. There are 64 households on this road and the residents can't continue to drive on it in this state."

She said the Council's engineers are doing their best with limited resources to repair  rural roads damaged over the winter and spring but she believes the Fethard to Drangan road should be one of the routes categorised as top priority for repair. She said the Council's Fine Gael members have written to the Taoiseach appealing for more funding to repair and maintain the county's rural roads.

Carrick-on-Suir Municipal District Engineer Willie Corby said the Council planned to reconstruct the collapsed bank with rock armour when ground conditions are dry enough to move machinery into the field. The Council also plans to divert the stream running below the road. Council staff have been in talks with the local landowner in relation to doing this work.

Mr Corby admitted the Council was trying to do a "loaves and fishes" job stretching roads funding to repair damaged roads across Carrick Municipal District. "We are putting pressure on the Government to allocate emergency funding for addditional roads."