Portrait of a Tipperary artist as a creative space provider 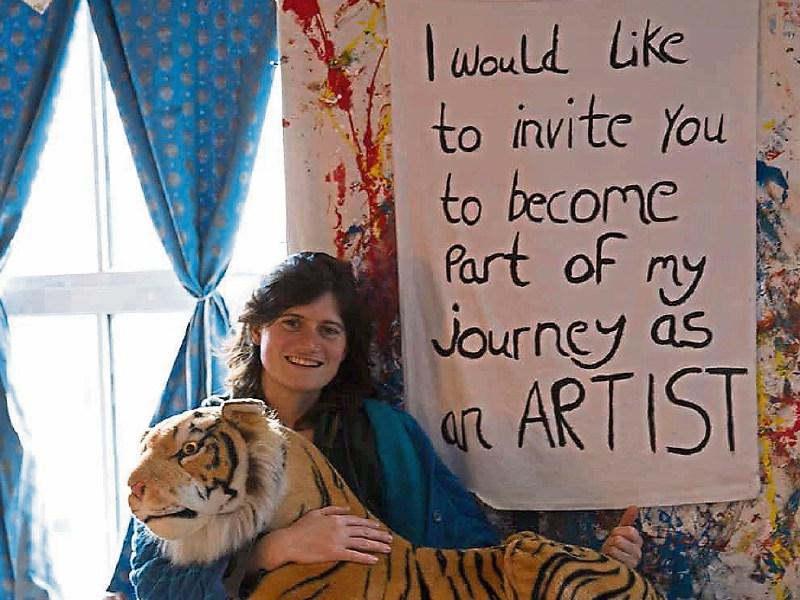 Artist Joanna Ryan-Purcell has a vision for the arts which has the potential to revolutionise the way the arts are funded in Tipperary, and more importantly, in her native Nenagh.

The author and artist who spent three years studying performing arts and one year studying technical theatre, has run the Blue Door creative space in Nenagh for the past year, but now wants the community to play a major part in it if it is to continue on a permanent footing.

There are now two Blue Doors running - the permanent Blue Door and the Blue Door sessions which are essentially pop-up events in different locations.

Joanna explains that the permanent Blue Door is a place for creative and non-creative people to come and “ be yourself. It’s for people who might just ask the question: am I creative or not? because those people are around as well. It’s a channel, even just to meet other people. It’s a non-judgmental space.”

Though not originally from Nenagh, she came to live in Cloughjordan when she was 14 years old but her family has roots in the town. Her mother was born in Nenagh and her grandfather was the well respected actor John Riggs Miller, who toured Ireland and England before returning home to look after the family farm.

“I very much feel his presence here. I found myself back here. I always knew I wanted to set up a studio and I knew it would be in a town not in the city. When I moved here, I felt like this is the right place for it. It is needed and there is enough thirst for it,” she says.

Following school in Nenagh, Joanna says she was “desperate” to get away to the city to find people who could understand her and to find like minded people.

“I literally just ran away to find people who would accept me for who I am and I know that there are lot of people like that in Nenagh, a lot of young people, who might not necessarily have a way out or access to an outlet or access to how to even find one,” says Joanna.

The Blue Door premises is moving to a new home, and with the decision to split it into two separate parts, she has turned to the local community to see how it wants that to work.

“I have thrown it out to the public on social media. We had our first meeting last week. In order for this to work and to become this wonderful space, the whole community needs to get behind it, because it is a big undertaking.

“It’s not a business for me, it's a creative space. My thing, exploring with my paintings, my writings and making all those connections, Blue Door sessions and getting my work there, I am doing that and it is all outside of Nenagh.

“Inside Nenagh, I have opened up the door to this new world, this new space and I am asking do you still want it. That is what I am saying to the town, because if you don’t want it now, I am going to be gone. People are saying the town needs, but it’s a community effort. That's the vision for me, to have this community space where you don’t have money disturbing the thing, you don’t have people or bosses determining it. It is not a one person job, that’s where the community needs to come on board. The original Blue Door on Pearse Street, I set that up.

The Blue Door has received support from the likes of the LCDC and Nenagh Arts Centre and will be involved with Culture Night this year.

But in terms of funding for space, you need a donation, she says.

“It’s about keeping the doors open, but it costs money to keep a space open and that could kill the creativity, that is why I am throwing it out to the community.”

The next meeting to decide the next step will be held on Friday, August 23, A Way to Heal, Friar Street, Nenagh, and anyone is welcome to attend.

One thing Joanna noticed with the permanent Blue Door was that it was tieing down, “and I am not going to let that happen to me. I don’t want this new place to tie me down, but I want to see it happen.”

Meanwahile, the Blue Door pop-up sessions have opened other doors - such as two appearances at Electric Picnic, and this year, she has been asked to curate the Global Green tent, where people can experience the setting as well as the performance.

“The Blue Door sessions, are to do with alternative music, art house performance, real underground. It is nothing to do with mainstream. The eras I am most inspired by are New York 1920s and London 1960s, and moulding them together creating this underground vibe.

“Everything is part of the experience. It’s not just about the act on stage. It’s the way the chairs are laid out, the paintings on the wall. Our main focus is to create that vibe - when you walk through that tent you are somewhere else,” she says.