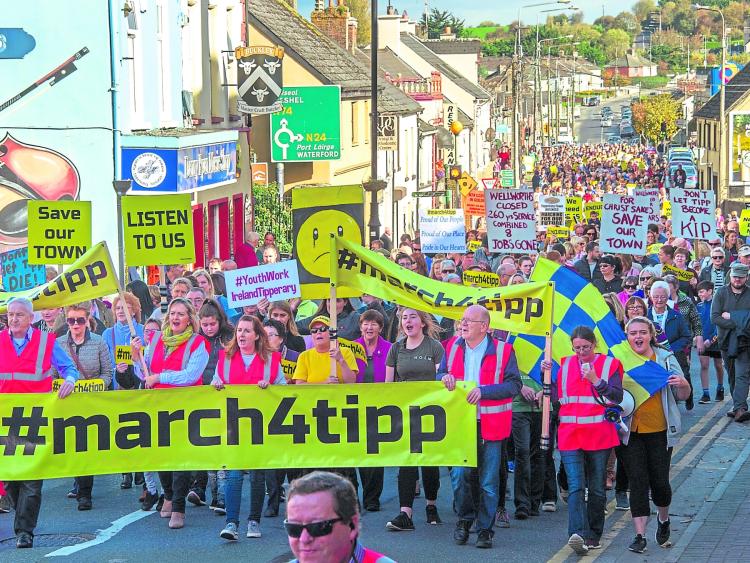 A government announcement is expected next week which will outline the structure and funding for the Tipperary Town rejuvenation project proposed by Taoiseach Leo Varadkar following protest marches in the town attended by thousands of people.
Next week government officials will outline the structres of the initiative which will see Alison Harvey, Heritage Council play a central role.
It is expected that Alison Harvey will not be appointed on a full time basis but that an independent external person will be appointed.
That independent person will oversee the production of a collaborative Tipperary Town Health Check,the creation of a platform and engagement structures that will bring together all sectors of town stakeholders, including theMarch4Tipp movement ,the development of an implementation plan that will identify agreed measures and the recruitment of a full time project manager.
€100,000 has been ringfenced by the Department of Housing,Planning and Local Government and the funding will be managed directly by the DHPLG to maintain the automony of the project.
It is understood that the project manager will report to a steering board chaired by the independent person which will also be made up of people from Tipperary Town Forum, Heritage Council's Health Check expert Alision Harvey, Tipperary County Council and the DHPLG.
When the health check process is complete the board will identify actions and facilitate funding applications to national funds to deliver on actions.
The process will be backed up by Tipperary County Council which will be tasked with facilitating the development of an implementation plan on areas such as traffic and building surveys.
It is expected that a public meeting will be held for all stakeholders and community interests once the independent lead and the project manager are appointed.