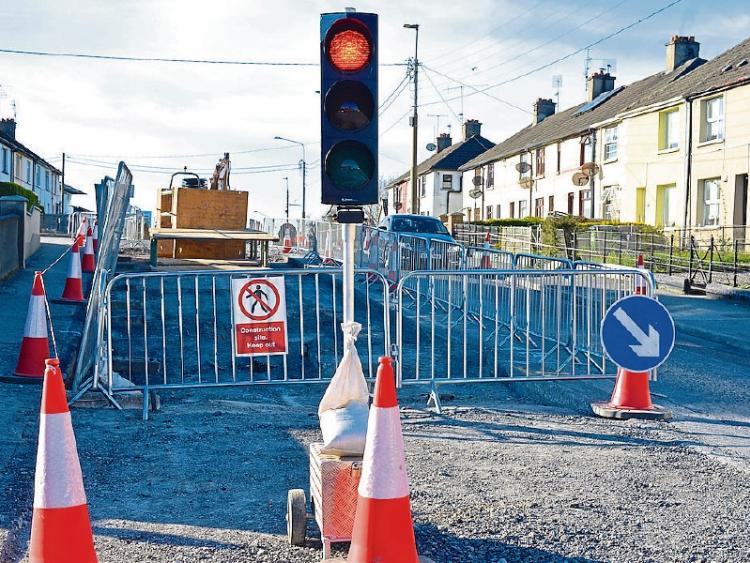 The roadworks scheme at Davitt Street in Tipperary where the signs and batteries from traffic lights were stolen. Photo: Caitriona Kenny

Tipperary County Council have stated that lessons learned on previous works will ensure more consultation will be carried out before works proceed at Main Street in Tipperary Town.
John Nolan, Tipperary County Council, told a council meeting that more consultation should have been carried out before the works in Davitt Street were done.
“We have learned from Davitt Street, people were not ready, we had not given people enough information” said Mr Nolan.
He said that before the planned works on Main Street start the council would show people what level of disruption would be involved.
Cllr. Annmarie Ryan asked if it was wise to proceed with Main Street without a good alternative route being identified. She said the by -pass might never happen but the town desperately needed a ring road.
She said the by-pass of the town was a priority with 7,000 vehicles going through the centre of the town on the N24.
Cllr. Ryan said the by pass was long term but an interim measure was needed but elected representatives were told at a meeting with TII (Transport Infrastructure Ireland) that providing the interim measure would have a negative impact on the costings for the N24 by pass.
Cllr. Michael Fitzgerald said he was happy that the by-pass for Tipperary Town on the Limerick Junction -Cahir section of the N24 was back on the national development plan.
He hoped a lot of the appraisal work on the project would be completed to coincide with the 2027 national development plan.
Cllr. Fitzgerald said a strong case was made for a ring road in Tipp with the TII and they did state that such a scheme might have a negative impact on funding for the by pass.
Cllr.Fitzgerald said suspending work on Main Street until the ring road was provided would be a mistake.