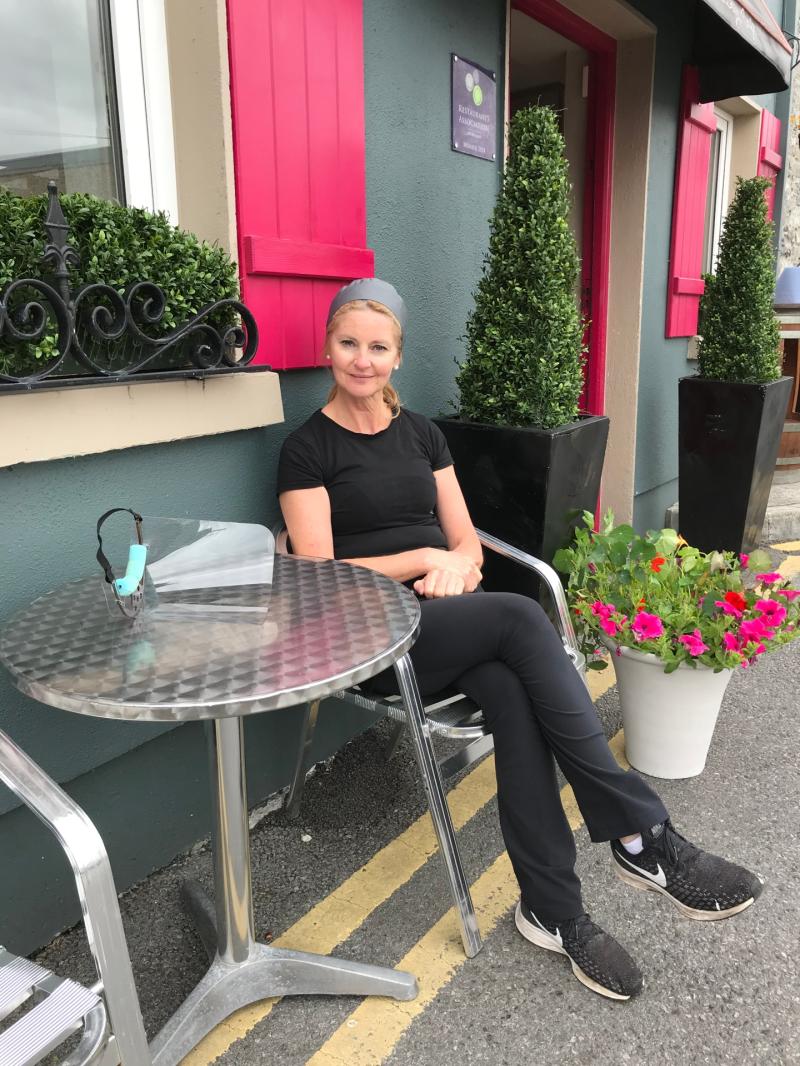 Outdoor dining: cafe owner Marie Nagle outside her Cinnamon Alley premises this week as Nenagh emerges from the lockdown

The lifting of restrictions as the country emerges from the Covid-19 lockdown can be a great opportunity for Nenagh, according to local businesses in the town.

The town centre was busy this week as most shops reopened, with Marie Nagle at Cinnamon Alley looking forward to a reimagining of the town centre.

The cafe and delicatessen owner is hoping that there will now be a greater shift towards eating al fresco.

“I am hoping to be able to pedestrianise a small part outside the shop,” she said. “I have sent a draft email to the council.”

Ms Nagle, who has been in business for 30 years, said that there was no reason Nenagh could not be like continental towns.

“We now have the perfect opportunity,” she said.

Marie is hoping that the town’s proposed traffic management plan will also allow for greater pedestrianisation, including allowing shops take over on-street car parking areas, as has happened abroad.

“It can be done. We can take the cars out of the centre of the town and create a calmness when shopping,” she said.

Cinnamon Alley has been open for takeaway business for the past six weeks and this Monday, Ms Nagle had chairs and tables placed outside her premises on Hanly’s Place.

Tissue and santiser are left on the tables and customers are reminded to santise the tables before they sit down and when they are leaving.

She is now hoping that the council will look at allowing her place table and chairs at the lower end of the lane which leads to Sarsfield Street as that would still allow access to the lane’s car park.

Nenagh Chamber president Denis Finnerty said that anything that would bring people into the centre of Nenagh would be good for the town centre and create a living atmosphere.

“I sense we could be on the verge of snowballing, but the priority at the moment is to reopen and get back to business,” he said.

A long standing champion for pedestrianising the town’s main street, Pearse Street, he said that there was a “stellar list” of food options in the town.

“Nenagh's cafe culture is second to none. Why not make the best of it?” he said.

Meanwhile, Stephen Slattery of Slatterys clothes and furniture shop on Pearse Street, reported a “slow but steady” return to business.

Saying he was delighted to be open again, Stephen pointed out that the shop, which opened on May 10, 1946, had previously only ever closed for the odd snow day.