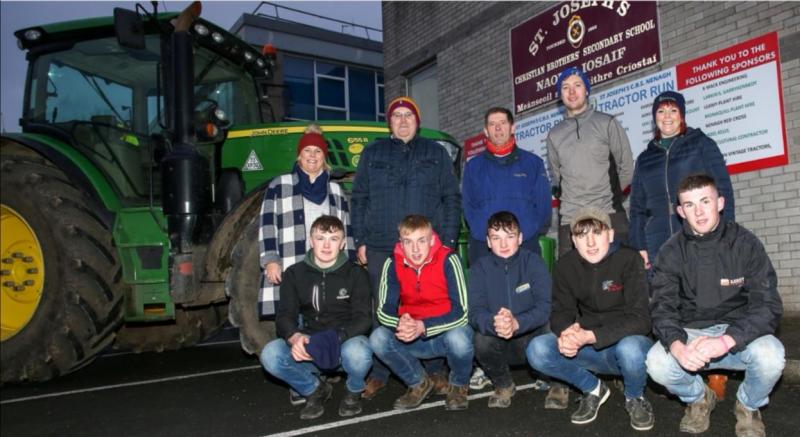 From a community who have been deeply and personally effected by farm accidents, five students Patrick Fogarty, Jack Gleeson, Michael Ryan, Paul Seymour and Patrick Quigley embarked on a mission to change the culture of farm safety.

Together they launched the Open Your Eyes to Farm Safety campaign through organising a tractor run and making a video.

The campaign can be followed at #openyoureyestofarmsafety

The transition year students, helped by their teacher Paul Butler, put together a practical video to show risks involved in farming and to farm more safely.

“Many students were affected by farm tragedies,” said Paul Butler. “We wanted to save lives on farms.”

He said that the video tried to encourage people to be more aware of the risks associated with farming.

“The video has really made Farm Safety cool in the school,” he said.

The students and teachers began their farm safety campaign after Peter Gohery, farm accident survivor, gave a presentation to the students about his own farm accident which left him with an amputated leg after he lost a limb in a PTO accident.

The students with the school’s support decided to hold a tractor run in aid of Embrace FARM.
The tractor run which was held in November 2019, raised €7,000.

Brian Rohan, co-founder of Embrace FARM said that great credit was due to the school for producing the video.

“The video the lads have made will definitely save lives if viewed by the right people but it might never be measured how many lives will be saved,” he said.

The Open Your Eyes to Farm Safety video has a number of farm safety scenes which the students recreated on the day of the tractor run to show the public the hazards and solutions to these which exist on farms.

The Health and Safety Authority will promote the video to all secondary schools in Ireland in September as a resource to be used to support health and safety learning outcomes which are embedded across the leaving certificate agricultural science curriculum.

Senior inspector for farm safety, Nenagh native Pat Griffin congratulated and commended the students and their teacher for developing one of the best farm safety videos ever produced.

“We hope it will inspire other young people, and, indeed, all farmers to see and manage risk on the farm and to farm safely,” he said.

The Irish Farmers’ Association has come on board to give its support and in conjunction with Nenagh CBS, IFA, Embrace FARM and the HSA a competition will be run for people to answer a few after watching the video.

“As farmers, we have to take the lead in addressing this issue and educating ourselves and our families about the dangers that exist on farms. IFA is committed to raising awareness about the need for farmers to take safety seriously. Any initiative that helps to do this is welcome and will be supported by our association,” he said.

The competition will run until Friday, July 24, to coincide with Farm Safety Week.

Peter Gohery of Embrace FARM is encouraging everyone watch the video and enter the competition.

“I am appealing to all farm families young and old to watch this video. Sit down and watch it with the whole family,” he said.

People can enter the competition by answering the questions at surveyhero.com/c/da34bcce. Only fully correct answers will be accepted.

Ten names will be picked at random from all correct entries submitted by July 24 by representatives supporting this competition.