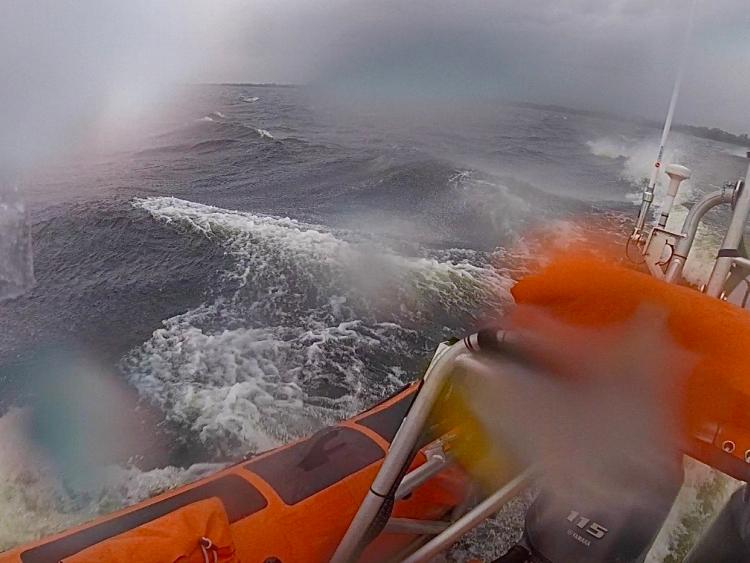 Lough Derg RNLI at the scene of the rescue last Saturday

At 5.02pm on Saturday, June 20, Valentia Coast Guard requested Lough Derg RNLI to go to the assistance of the motor boat near the Corakeens Islands.

The wind was southerly, Force 7 and gusting. Visibility was fair, with driving rain and frequent squalls.

A vessel in the vicinity had taken the motor boat under tow, but under the severe weather conditions, the vessel being towed was driven on to rocks by the entrance to Dromaan Harbour on the County Clare shore.

The lifeboat arrived on scene at 5.20pm.

Once the RNLI volunteers established that the casualties were safe and unharmed, they took the motor vessel off the rocks and into Dromaan, the closest safe harbour, where it was tied alongside at 6.20pm.

The two casualties, wearing face masks and gloves, were taken by the lifeboat back to Dromineer.  The vessel that had provided assistance made its own way to the public harbour at Dromineer.

Owen Cavanagh, volunteer helm at Lough Derg RNLI advised boat owners to "ensure your engines are fully serviced and fuel is clean before returning to the water for the summer season".

He urged people to "respect the water, and always check the weather forecast before going afloat".