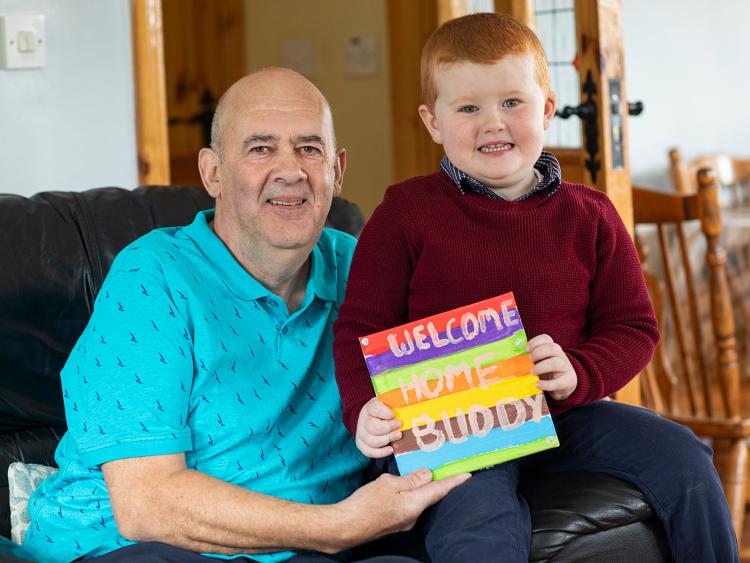 Miracle man Andy Corbett has hailed as heroes the staff at South Tipperary General Hospital who battled around the clock to save his life as he fought Covid-19.
“They are incredible people. I am a very lucky man to be still alive. I owe my life to everybody at the hospital,” said Andy.
He was given a guard of honour as he left the hospital after surviving his ordeal as the staff who saved him from the clutches of Covid-19 applauded him out the main entrance.
“I shed a few tears, it was very moving. They are amazing people. Real heroes,” said Andy.
Andy, from Ballynonty, spent 25 days on a ventilator at STGH battling Covid-19 and a total of 45 days in the hospital up to his emotional discharge on May 12.
On numerous occasions throughout his battle, staff feared the worst for 62-year-old Andy as his wife Statia waited anxiously at home by the phone.
“I was beside the phone day and night. I expected to be told the worst many times. I was a nervous wreck,” said Statia.
Remarkably Andy survived his horrific ordeal.
Every day is special now for Andy who was thrilled to be reunited with his ‘Buddy’, Dylan, his only grandchild.
“I missed him more than anything. We are very close. When I came out of ICU the nurses had put pictures of Dylan all over my room. We call each other ‘Buddy’ and he has just graduated from his preschool. I am so lucky to be alive to enjoy special days in his life like this,” said Andy.
Andy said he is still very wary of going out .
“Anytime I do go out I bump into people and they all tell me ‘I thought you were dead’.
“When I do go out it frightens me to see people so close together. People don’t realise how horrendous this disease is.
“I don’t want anybody to go through what I had to go through. I hope people continue to do the social distancing and everything they can to stop this disease,” said Andy.
Andy remembers an ambulance arriving at his home in Ballynonty on March 29 and he can remember little else after that.
“I had been at home for ten days prior to that self-isolating. Initially I went to the hospital and I tested positive for Covid and I was sent home to self isolate.
“I was getting worse and worse at home and ten days later the ambulance came,” said Andy.
He was admitted to South Tipperary General Hospital on March 29 and was put straight on a ventilator.
“I am still very weak. Doctors told me it is going to be six months or more before I feel strong again,” said Andy who retired from working in the nearby briquette factory in 2018.
His major pastime is vintage cars but for the moment he is just happy to be at home enjoying the company of ‘Buddy’, his wife Statia, his son David and daughter-in-law Louise.