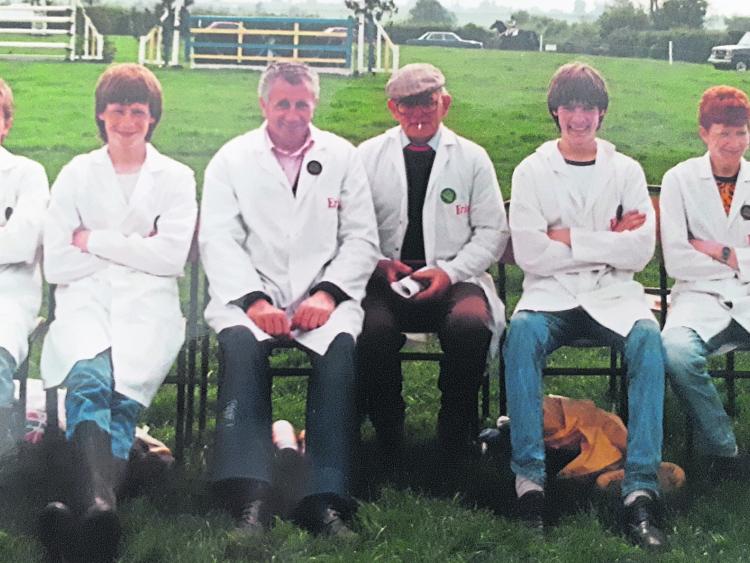 Without the help of local volunteers the Holy Cross Show could not have been hosted, Young and old alike got involved and helped ensure that everyone who attended had a great day out

Fifty years ago this week, The Holy Cross Show had its first outing as a means of raising much needed funds for the refurbishment of the ruined Holycross Abbey.

And, from a small acorn a great oak tree grew as the Holy Cross Show, at its highest point was attracting upwards of 20,000 per weekend to the parish, including Taoisigh, TD's celebreties and some of the finest showjumpers the country has ever seen.

The Holy Cross Show went on to become the finest family day out around with show jumping, Bonnie Baby competitions, Dog Show, tug-o-war, fashion shows, food and beverages aplenty and a convivial atmosphere which ensured that everyone had a good time.

And, this was all done thanks to the efforts of the local community. Each and every facet of the staging of the show had local involvement - scores and scores of volunteers whose expertise ensured that everyone who attended did so in comfort and loved the experience. 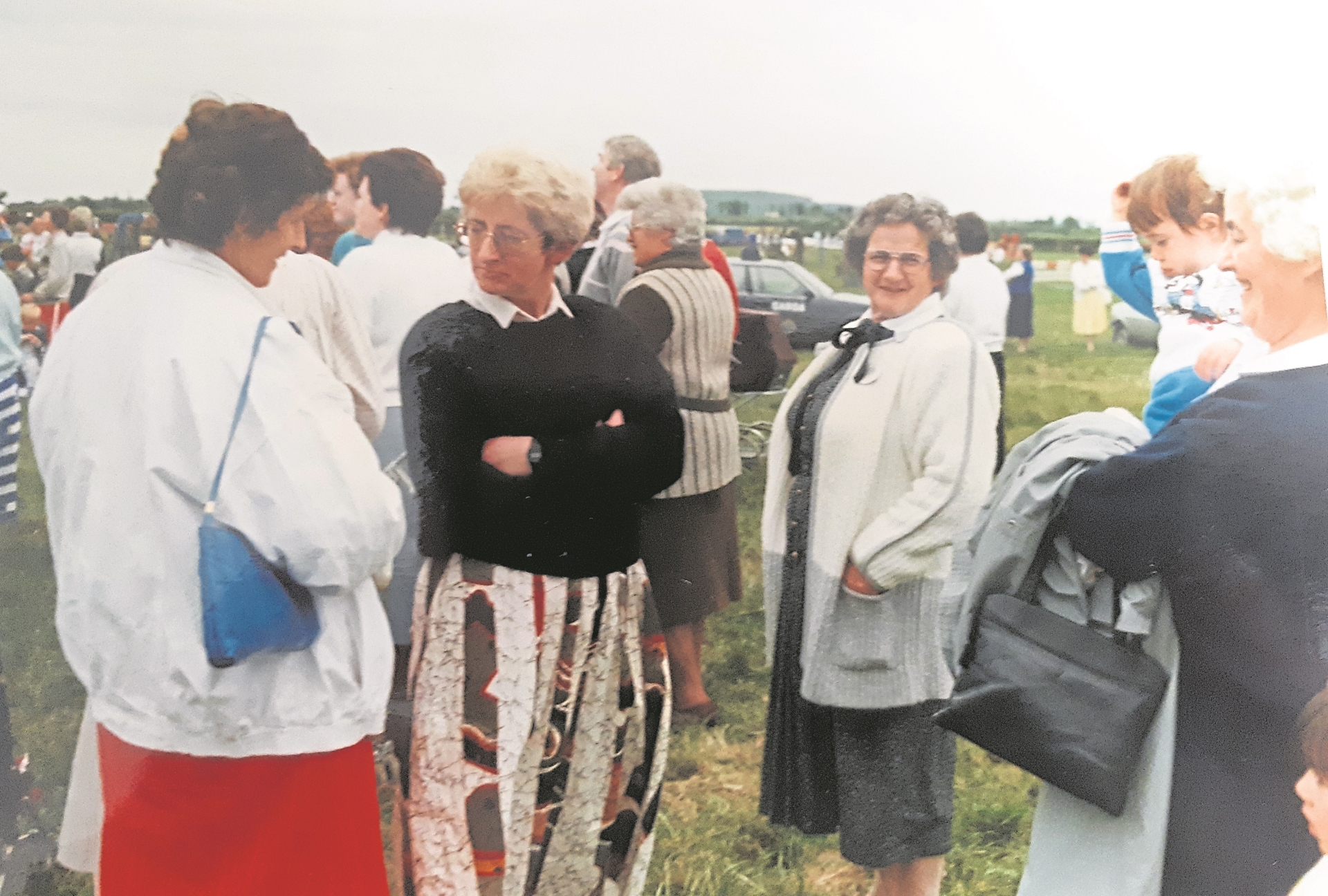 Locals enjoying the Holy Cross Show - it was always a tremendous day out for all the family with fun, competition and of course the show jumping, as well as the chance to meet people

The course designer was Captain T D Morgan, while the Assistants were John Carrigan and John Ryan. The course builder was Tommy Wade.

The main event each year was for the Holycross Abbey Restoration Perpetual Trophy fashioned in Waterford Glass - a much sought after prize and among those to win it included former Tipperary All-Ireland winning hurler and Aga Khan Cup winner Capt Larry Kiely; Tommy Brennan; James Kernan; Eddie Macken on a number of occasions; Paul Darragh also on a number of occasions; Capt Con Power; Capt Gerry Mullins; Edward Doyle; and Francis Connors to name just a few. In other words, the cream of the show jumping crop.

Retired Garda Detective Tom Donoghue was a major driving force and he explained why the formula was so successful.
“It was the local people who made it. So many were involved in making it a success and when competitors came to Holycross they knew they were in for great competition. That's why all the big names came and then of course, it was a fantastic day out for the family with so much going on. It was a brilliant event,” Tom said. 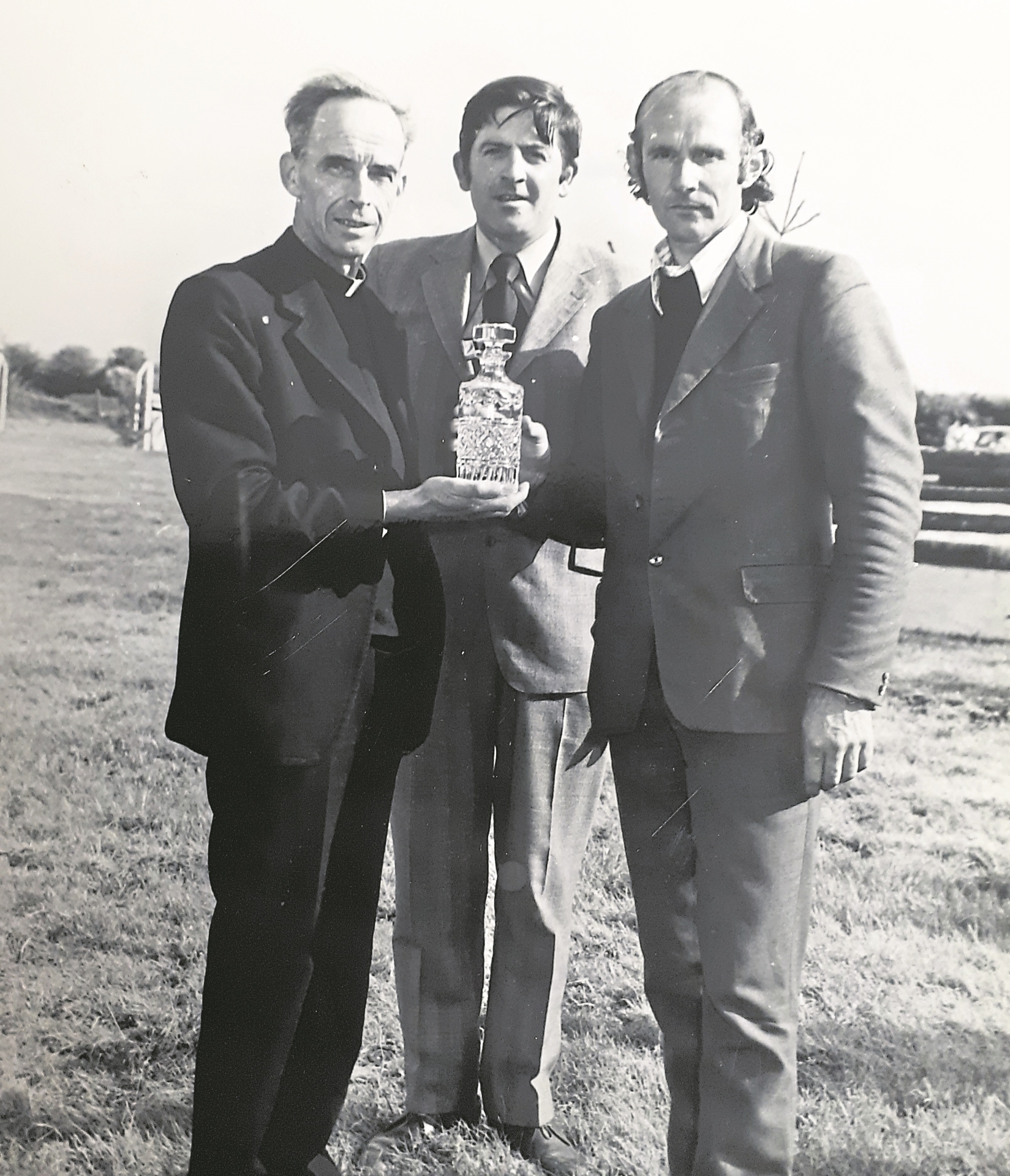 Paul Darragh wrote about the Holy Cross Show: “Holy Cross does more than honour its heroes. It plays a big role in making them. Those of us who bring horses or ponies, jumping or showing, know the standards will be high. There is quality organisation and quality competition with a quality venue. To win at Holy Cross is a comforting indicator,” he said.

Indeed, in 1977 the Chairman of Bord na gCapall, Mr Stan Diffley was so taken with the gymkhana which had become one of the largest equestrian events outside of the Dublin Horse Show, suggested that Holycross should be elevated to full show status. It duly was a year later and from the many archives and newspaper cuttings it is evident that the show not only captured the imagination of locals and riders alike, it was also a darling of the national media, which referred to the events in glowing terms.

The appearance of the Aga Khan Cup in Holycross in 1980 was the first time it was displayed outside of the RDS and it all happened thanks to Capt Austin Woulfe, Sec Gen of the Equestrian Federation of Ireland - that's how much was thought of Holy Cross at the time. 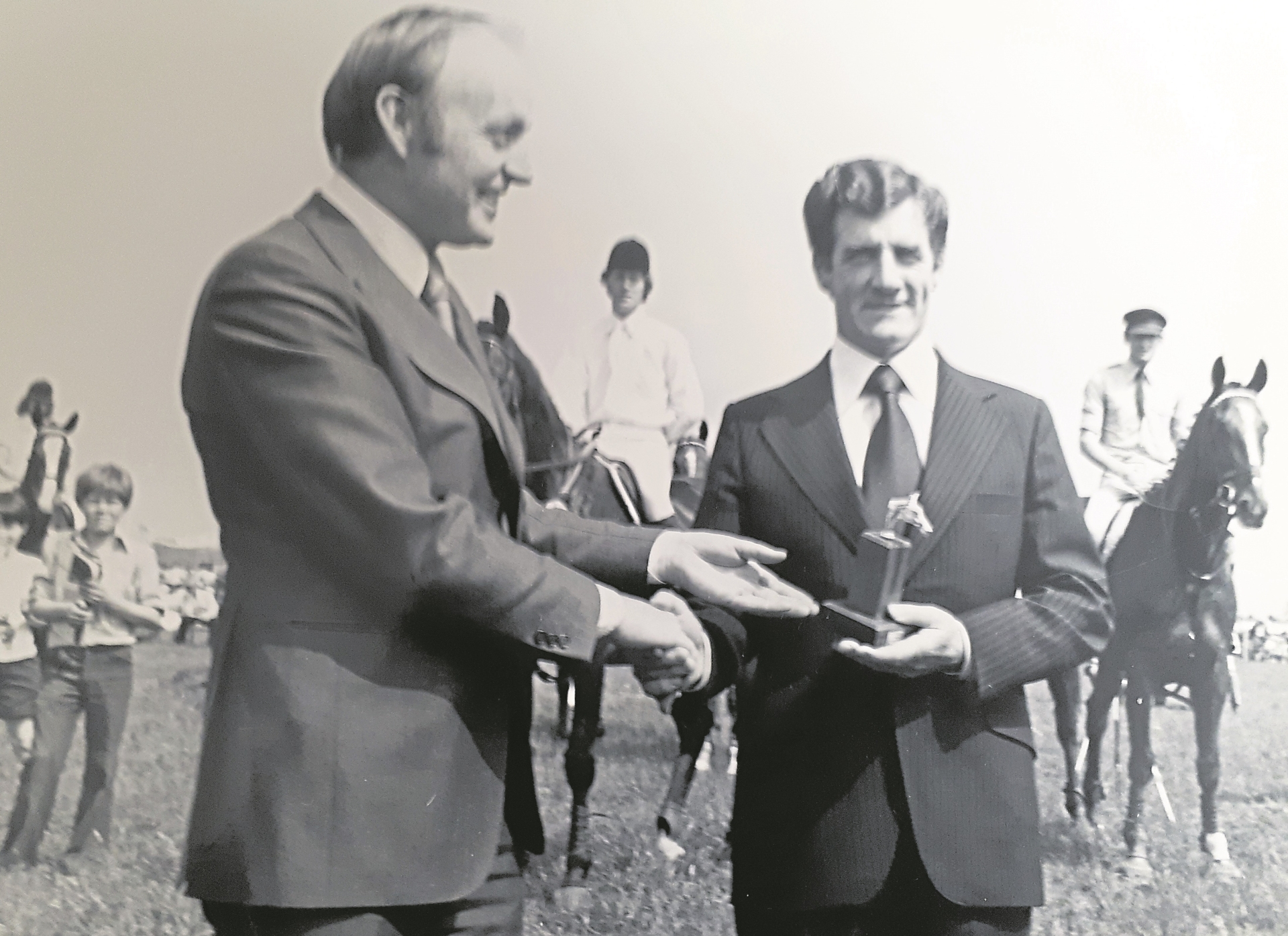 Above right: Larry Kiely receives a presentation from former Government Minister Michael O'Kennedy on behalf of the show to mark his retirement from eventing

Of course, all the while, the funds raised from the Holy Cross Show were going towards the restoration of Holycross Abbey. Soon, the restoration was completed and the Abbey was to be a place of prayer and retreat for generations of faithful, and remains so to this day.

The Holy Cross Show had succeeded on a many fronts - first of all it helped to raise the much needed funds; secondly it gave a platform to the best of Irish equestrian talent to showcase their horses and their acumen; and thirdly, it provided a magnificent day our for families from all corners of Tipperary and much further afield.

“Timmy Hyde from Cashel was a well known National Hunt jockey and was competing all over the country. He attended our meetings and made out the programme we should run with. He was very generous with his time and was always on hand to give advice.

“In 1971, I approached Tommy Wade and asked him to jump the famous “Dundrum” at Holy Cross, but he refused saying the horse, and he, had retired. However, he said he would bring “Dundrum” and would ask Timmy Hyde to ride him, which he did. Tommy was known all over the world and all local and national papers at the time carried the headlines that “Dundrum” was to jump at the show. A huge crowd turned up - it was great publicity for us,” said Tom Donoghue who added that Timmy gave great service to the show over the years. 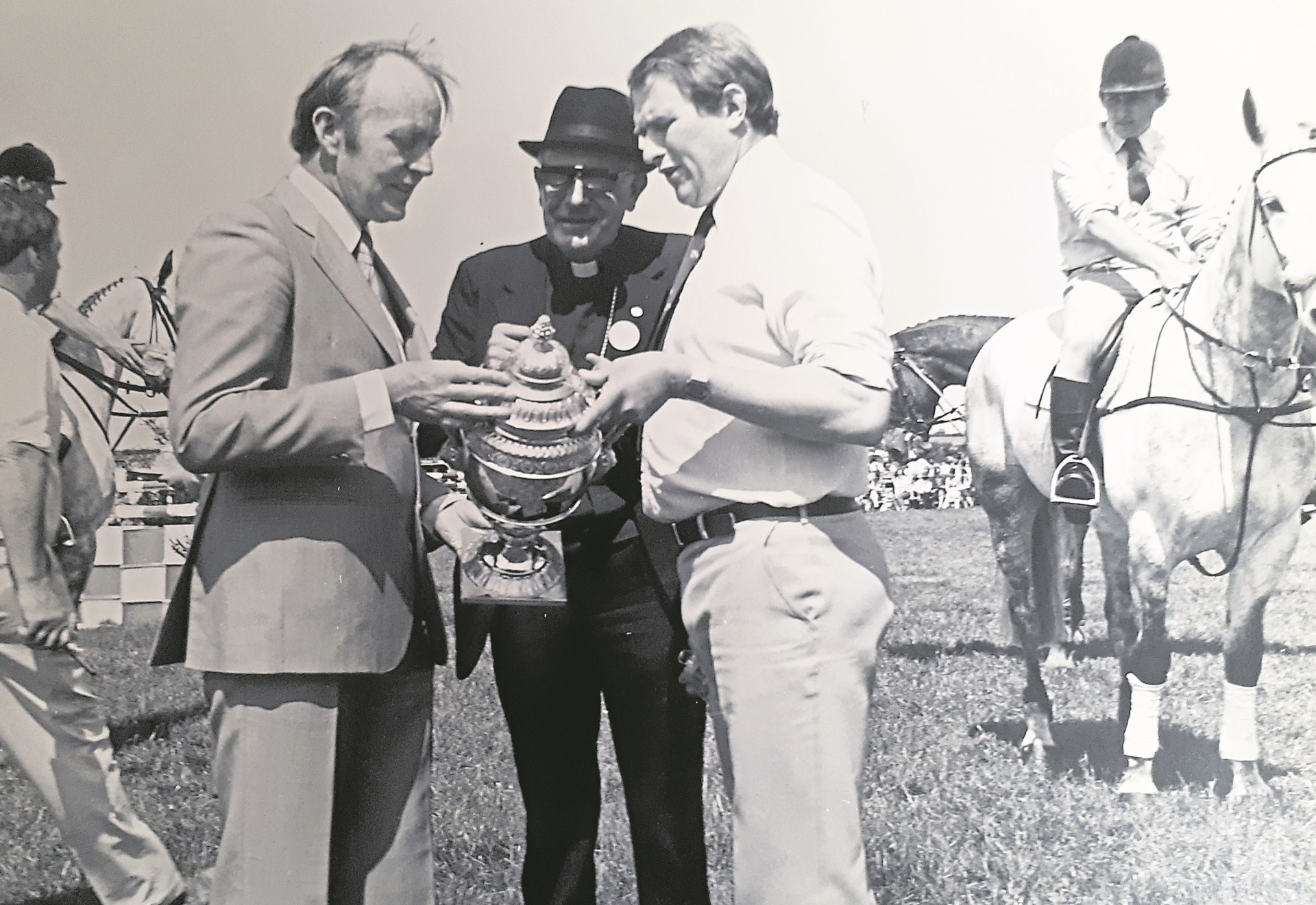 Michael Lowry TD was also very much involved and spearheaded the production of a 21st anniversary souvenir booklet which is now a vital source of local history.

“There were great people involved all over the place and I cannot speak highly enough about them all. They made this thing happen - it could not have happened without them and it is something Holycross parish should be very proud of forever,” Tom Donoghue said.