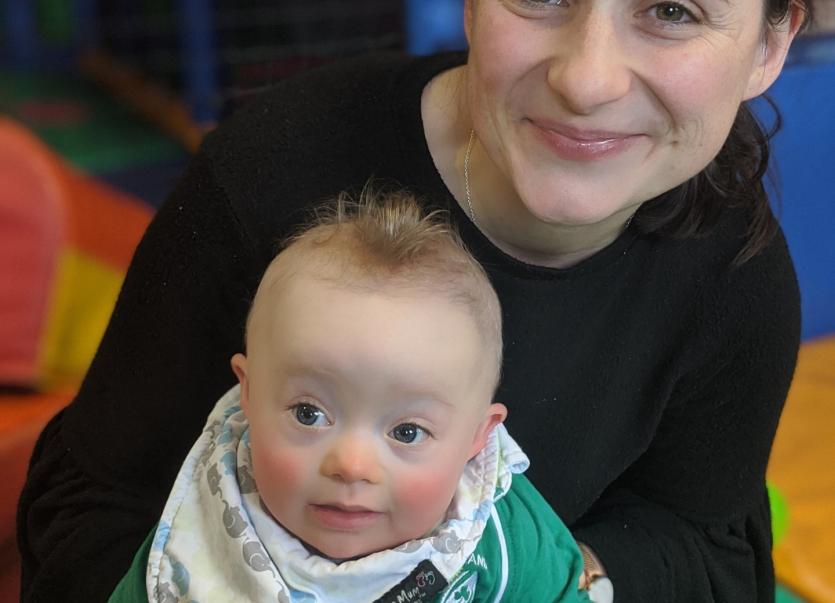 Moon walk challenge: Conn Brennan, with his mother Marie, who hails from Drom and Inch, has been named as an ambasaador in the Woodies Unsung Heroes walk to the moon fundraising event

The legendary singer Frank Sinatra may have sang Fly me to the Moon, but one Tipperary mum and her son are asking people to walk to the moon to raise funding for a number of charities.

The Woodie’s Heroes campaign will see 1,400 colleagues of the DIY, Home and Garden store walk to the moon in a bid to raise vital funds for Down Syndrome Ireland, Cystic Fibrosis Ireland, Autism Assistance Dogs Ireland, and ISPCC Childline.

Marie Brennan, who is orginally from Drom and Inch, but now living in Kildare, and her son, Conn, have been chosen as ambassadors for Down Sydrome Ireland for the event.

Conn, who is 17 months old, has been described as a little fighter by Marie and his dad Gary, and is adored by his twin Ruairi, and big sisters Doireann and Róise.

Conn makes friends wherever he goes, but especially at the Early Development Group run by the Kildare branch of Down Syndrome Ireland.

He loves music and is currently working on his speech and Lámh signs.

Conn is spending a lot of time trying to get on his feet to stand, but children with Down Syndrome have to work much harder at everything.

However, Conn is literally taking it all in his stride.

Down Syndrome Ireland has been a great support and help to Conn since he was born.

He has had a number of health complications including feeding. Despite this, family mealtimes are probably his favourite time of day and what he can eat, he absolutely relishes.

The future is very bright for Conn.

Money raised through the Woodie’s Heroes Fundraising Campaign will help Down Syndrome Ireland develop a new feeding programme, costing around €35,000.

Up to 90% of children with neurodevelopmental disorders such as Down Syndrome experience signs of dysphagia, including coughing, choking, chest infections, poor weight gain and breathlessness, often from birth or early infancy.

The provision of feeding workshops to parents and professionals is essential to ensure the early identification of dysphagia.

People who take part in the lunar challenge can walk, run or cycle and then log their steps in store or online.

The last leg of this epic journey will be completed in September, when a team of Woodie’s Heroes will undertake the gruelling task of cycling 1,600km around the country over five days.

In the last five years, Woodie’s Heroes have already raised an incredible €1,554,511 for many outstanding Irish charities.