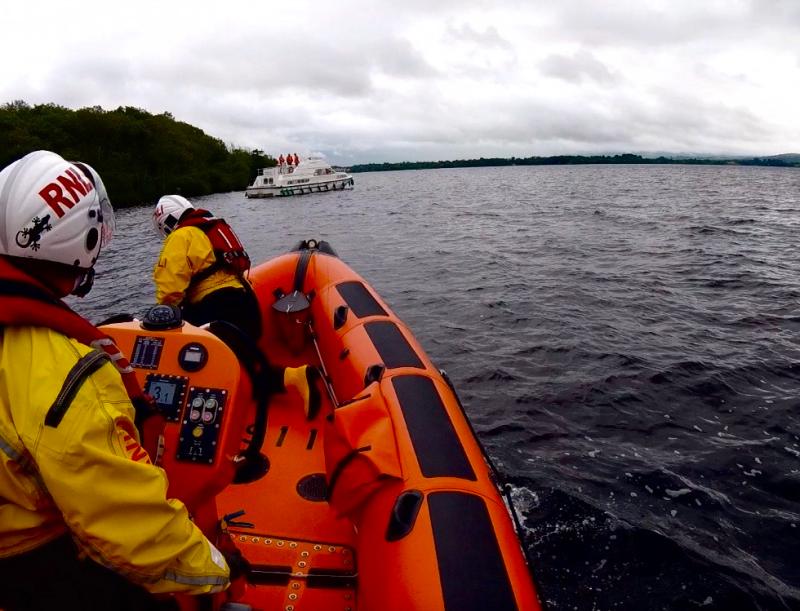 On afternoon, Saturday July 25, Valentia Coast Guard requested Lough Derg RNLI to go to the assistance of six people on a 42ft motor cruiser that ran aground at the southern end of the Corakeen Islands, in Dromineer Bay.

The wind was westerly, Force 3. Visibility was good to fair, with frequent heavy rain squalls.

Using navigation charts and taking depth soundings, the lifeboat made a careful approach to the cruiser, and was alongide the vessel at 3.30pm.

The lifeboat volunteers found all on board the cruiser to be safe and unharmed and wearing their lifejackets.

An RNLI crew member was transferred to the casualty boat and once satisfied it was not holed, set up for a tow.

At 3.40pm the lifeboat had the vessel off the rocks and towed out into safe water.

Once in safe water, and after it was established that the drives and the propeller were in good working order, the tow was released.

With an RNLI volunteer remaining on board, and the lifeboat standing by, the cruiser made way to Dromineer Harbour.

As both vessels approached Dromineer Harbour, the lifeboat went ahead to drop off two crew so that they could receive lines from the cruiser as she came alongside.

At 4.35pm the cruiser was safely tied alongside in the public harbour at Dromineer.

Liam Maloney, lifeboat operations manager, Lough Derg RNLI, advises boat users to "enjoy Lough Derg, plan your passage, keep a lookout for your next marker and remember to stay within the navigation channels".