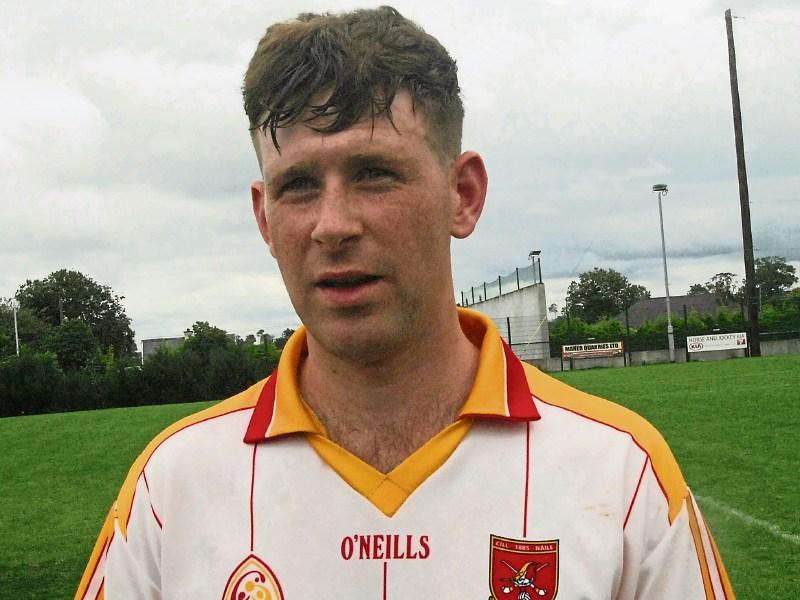 Killenaule's Eoin Barry who put in a flawless performance of free-taking for his side in their Seamus O Riain victory over Cashel King Cormacs at Littleton this afternoon. Barry scored 0-15 in total.

As expected Killenaule opened their Seamus Ó Riain Cup campaign with a victory over Cashel King Cormacs at Littleton this afternoon doing just enough for a deserved three points win in the end.

The Robins’ owe their victory to a great part to an impeccable free-taking performance from Eoin Barry who ended the game with a 15-points personal tally, which included a flawless 13 out of 13 points from frees for the left corner-forward.

Always in control but never dominant to the extent that they had their opponents beaten, Killenaule had to up a gear or two in the dying minutes to hold off a late challenge by the King Cormacs.

Six points down at the second half water break, trailing 0-18 to 0-12, Cashel were thrown a lifeline in the 50th minute when an attempt at a point from Aaron Moloney out near the sideline was fumbled by the Killenaule keeper and the sliotar dribbled over the line. The game was suddenly back in the melting pot. On the hour mark the margin had been reduced to just two points as the West Tipperary side sensed an upset, but Killenaule, steadied by Joe O’Dwyer and Paudie Feehan in the half-back line, finished the stronger to claim victory.

It was tit-for-tat for the opening 10 minutes of the game after which the sides were tied at 0-3 apiece. After Eoin Barry and Eoghan Connolly had shared points an excellent score from the sideline by Conor O’Dwyer gave Cashel the lead in the sixth minute.

Dean O’Connor’s equaliser was quickly cancelled by an exquisite sideline cut from Cashel’s Dan Moloney to put his side ahead again after seven minutes, but it would be the last time they held that advantage in the game.

Three points in a row for the Kenneth Browne-managed Killenaule included scores from play from Dean O’Connor and midfielder Michael Doyle bookending an Eoin Barry free.

Indeed in a free-ridden game which accounted for 24 white flags, the next three scores came from placed balls by Conor O’Dwyer (C), Eoin Barry (K) and Eoghan Connolly (C), before Ciaran O’Dwyer finished a nice Killenaule move to put his side 0-8 to 0-5 up at the water break on 19 minutes.

In a disappointing second quarter six of the seven scores came from frees, Eoin Barry punishing the King Cormacs time and again from anywhere they liked, while Conor O’Dwyer replied with a pair of frees for Cashel. The game’s outstanding player at centre-back was Cashel’s Eoghan Connolly who to cap a fine display majestically from 60 metres cut a sideline ball over in the 26th minute.

At the half-time whistle Killenaule, having played against the breeze, were four to the good at 0-12 0-8 and well in control.

Cashel hadn’t learned much at the half-time talk it seemed for the first two points of the second half were further frees from Eoin Barry to stretch their advantage to six.

The Killenaule panel before today's win over Cashel King Cormacs in Littleton.

Another pattern of five of the next six points from frees followed in a tame enough game to leave Killenaule – relegated from the Dan Breen Cup last year – leading 0-16 to 0-12 half-way through the second period. Two of those frees were from Eoin Barry, the three Cashel frees from Conor O’Dwyer (2) and Eoghan Connolly. The only point from play in this period, and perhaps the best of the game came, from Ross Bonnar when he finished off a fine clearance from Cashel defender Padraic O’Donoghue.

Eoin Barry eventually got one from play in the 44th minute, to add to the 12 frees already scored, before Tony Doyle had a good point for ‘The Robins’ after Joe O’Dwyer’s strong run through the middle helped create the space.

When on 50 minutes referee John Dooley called the second half water break it seemed as if the game was destined for a tame conclusion but immediately on the restart Cashel got that fortuitous goal which halved their deficit to three and gave them some belief in a possible upset.

Eoin Barry with his second point from play gave Killenaule the perfect response before Connolly and Barry again swapped frees. Two quick points in a row for Cashel from Aaron Moloney (after good work by the impressive James Cummins) followed by another Eoghan Connolly free had the margin at just two, 0-20 to 1-15, by the 60th minute.

Suddenly with backs to the wall – and without any John O’Dwyer or Kieran Bergin to call on – Killenaule were under serious pressure for the first time in the game. But they stood up well to the challenge, steadied by two valuable points from Tom Keaveney and Joe O’Dwyer, ‘The Mouse’ finishing the game in a rousing manner.

Michael Coleman pulled one back in the 63rd minute for Cashel but again Thomas Keaveney replied for that safer four points advantage before the last score of the game arrived in the 67th minute from a free by Eoghan Connolly.

In fairness to the Cashel side they kept trying to the very end and will take encouragement from this performance even in defeat.

Killenaule will be happy to bank the two points and move on to what will be stiffer challenges ahead in the coming weeks.