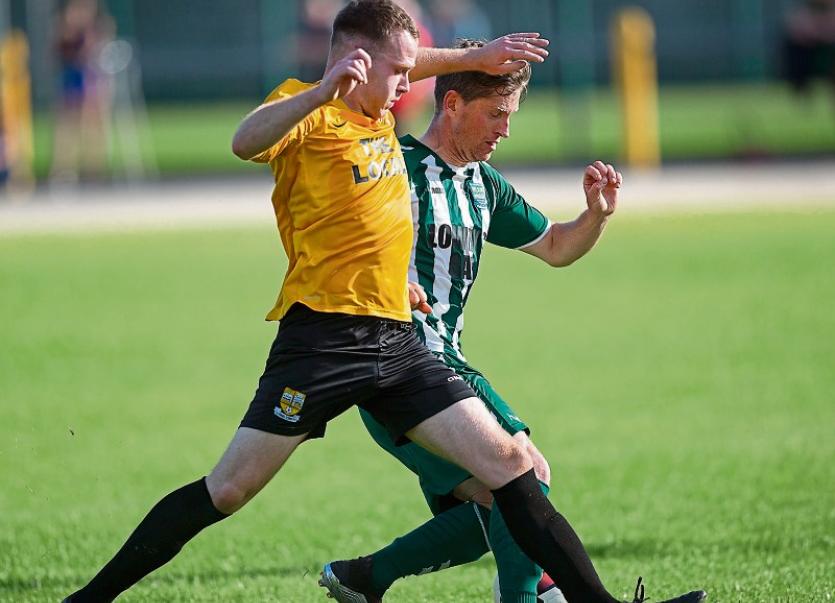 Clonmel Town played host to Cahir Park on Wednesday night with both sides keen to finish the season strongly, and Cahir Park really targeting the game as a way of moving away from the relegation zone to safety after an upturn in their fortunes over the past few games.

On a perfect evening for football Town made all the early running and appeared to have taken the lead when Rhys O’Regan was on hand to finish after Evan Maguire’s effort came back off the post, however an offside decision intervened and the game remained scoreless.

Within minutes O’Regan burst forward again evading the Cahir Park defence finding himself one on one with the Cahir keeper but Adam Gallagher pulled off a fine stop.

The hosts were laying siege to the Cahir goal at this point with a series of corners and free kicks but to their credit the Cahir defence stood firm. On the half hour mark Cahir Park almost snatched the lead with a free header from a corner which just went narrowly wide. Town responded immediately, a clever through ball from Ian Cleary released Evan Maguire who raced through one on one, but again the Cahir netminder came to the rescue for the away side.

This was becoming the theme of the first half and in keeping with the game it was only fitting that Gallagher once again had the last word as the first half ended with a stunning fingertip save to deny Craig Guiry’s dipping effort.

The visitors started the second period the brighter of the two sides and took the lead when a Kenny Cunningham free kick was headed home by Daragh Conway.

To their credit the home team reacted instantly as Keith Cashman and Keith Browne started to really dominate the midfield area, with Conor O'’Sullivan having more and more of an influence from right full and being the catalyst for all of his side’s good attacking play.

The equaliser duly arrived when a brilliant Evan Maguire free kick was parried into the path of Rhys O’Regan who finished smartly.

The game now became stretched as Town poured forward in search of a winner and Cahir always a danger on the counter attack with Dale O’Mahony in particular making some telling interventions.

Town looked to have found that winner 15 minutes from the end when a Keith Browne goal bound strike appeared to be saved on the line by a Cahir hand but no penalty was given.

Both sides traded blows as the game really opened up and it was the home side who landed the killer blow when Jack Burke was on hand to finish after a Cashman flick on fell perfectly into his path minutes from the end.

Two Mile Borris had a fantastic start to this Covid ravaged season, but the wheels have well and truly come off and this result coupled with others over the weekend has left them in serious trouble of being leap frogged at the bottom end of the table, and pushed back into the division below.

A young Town team  slowly got on top and finally broke down the home side’s dour defence when a rasping shot by Luke Kiely rebounded into the path of Ian Cleary and he slammed the ball to the net, midway through the first half. This gave the visitors the advantage of being able to defend their lead and hit the home side on the counter.  Borris now had  to push on looking for an equaliser. And they thought they had got it when striker Jamie Carey slipped the offside trap and was put through with four minutes left but after beating the keeper his shot went agonisingly wide of the mark.

The home side threw everything forward to try to salvage a point, so there was almost an inevitability when Town managed to break up the field for a free Richie Crowe to score and  secure the win for the visitors.