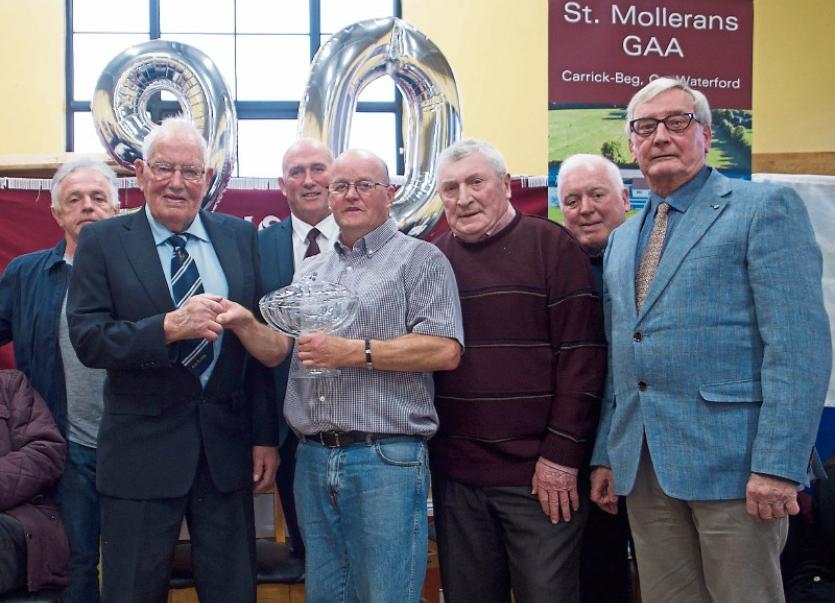 Paddy was a hugely popular and respected member of St Molleran’s GAA Club for more than 70 years and was a founding member of St Nicholas Boxing Club.

As well as playing football for St Molleran’s GAA Club in his youth, he served with distinction as the club's chairman, groundsman, county board delegate,  match steward and team selector.

He was held in such high esteem in St Molleran’s that the club hosted a celebration in Carrickbeg Community Hall last October to honour him on the occasion of his 90th birthday.

Paddy was presented with a crystal bowl and plaque in appreciation of his years of service to St Molleran’s Club at the celebration, which was  attended by family, friends,  club players and officials past and present, Waterford GAA County Board officials, Munster GAA Council representatives and members of St Nicholas Boxing Club.

The club’s grounds were closed until  Wednesday as a mark of respect.

In a heartfelt tribute, St Molleran’s GAA Club said it was with great sadness that it extended  its deepest sympathy to Paddy’s family.

The club  thanked Paddy for all he had done for the club and declared he will be “sorely missed”.

“Paddy was the epitome of a club man having immersed himself in all aspects of the club from its formation as a player, mentor, looking after the pitch, bringing players to games and also as a delegate to the County Board and ultimately chairman of his beloved St Molleran’s.”

The tribute recalled that in the early years, St Molleran’s was the hurling club and Windgap was the football side of the parish.

“Paddy was a keen footballer and his proudest day on the field of play was winning the 1959 County Junior Football championship with Windgap.

“Later a new football team called Kilmolleran was formed before both Windgap & Kilmolleran were disbanded and St Molleran’s became a hurling and football club.

“While football wouldn’t be the first-choice code in the club, Paddy Moore along with his great friends John O'Crough and Tommy Mickel kept it going down through the years.”

The club’s tribute also recounted that when St Molleran’s GAA Club purchased its playing grounds at Coolnamuck in the early 1980s, Paddy took on the mantle to maintain the grounds and pitch.

He always kept the grounds in “impeccable” condition and was ably assisted by another good friend Mick Loughlin.

“Paddy was chairman of the club for a number of years and was always a steadying hand for the club.

“He served as County Board delegate for a long number of years and made many good friends through this role.

“Paddy also served as a match day steward at both county and provincial grounds.”

The club also paid tribute to the huge contribution Paddy’s wife Phil has made to the club.

It recounted how Phil took on the role of the club’s Deise Draw coordinator in the past ten years and Paddy supported her  by driving her to venues around the county hosting the monthly draw.

St Molleran’s GAA Club also pointed out that in 2013 Paddy was recognised at County Board level for his enormous contribution to his club and to the GAA when he received the Jack Furlong Award.

This special  award is annually presented to a person, who has given a lifetime of service to the GAA.

St Nicholas Boxing Club also extended its deepest sympathy to the Moore family and said Paddy will be very sadly missed by all its members.

“We are absolutely devastated that Paddy has passed away. The club and town  has lost an unbelievable volunteer,” said St Nicholas BC secretary Anthony Benesch.

Paddy, who was a keen boxer in his youth, played an instrumental role in reviving  the club.

At the 90th birthday celebration in his honour last October, Jim Drohan of St Nicholas BC recalled  how Paddy called a meeting in the Parish Hall in Carrick-on-Suir to re-establish the club in 1999.

And he sourced €9,000 funding that was spent on purchasing a boxing ring and enough equipment to get the club up and running again.

He also helped out with training the club’s young members.

Mr Benesch said Paddy continued to help out at training sessions up to a few months ago.

“He would still hold the boxing pads for the young fellows and he was heavily involved in the club committee.

“All the youngsters looked up to him. He was like the godfather of the club. For a man of Paddy’s age to come and help with training our young members was unbelievable.”