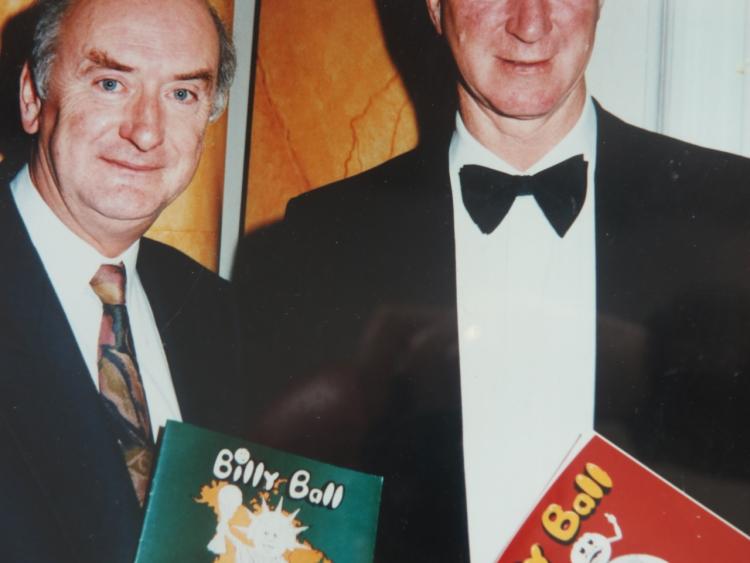 EVERYONE in Ireland was sad to hear of Jack Charlton’s recent passing, but for the old Vocational School, Roscrea People, Timmy Quinlan (The Heath and now Tullamore) and Roscrea historian George Cunningham. one episode of his life in 1994 had significant memories.

University of Limerick honoured Jack with an honorary doctorate in that year. George Cunningham was a member of the UL Governing Authority at that time and not only had a ring side seat but attended a lunch and met all of Jack’s party including his lovely wife Pat.

George presented Jack with copies of 'Billy Ball' which Matt Dillon’s classes in 1990/91 and 1994 had produced with wonderful illustrations by Timmy Quinlan and which was published by Roscrea People to raise funds for worthy charities.

The Stories ‘Billy Ball conquers all’ and ‘Billy Ball Summer of Hope’ tell of Billy Ball going to the world cup and then raising money for the third world.

The illustrated copies with many familiar faces of both the team and staff at the Vocational School remain a testimony to the great talent that Timmie Quinlan (a past pupil of Coolderry NS) had and has and glad to relate that Timmie’s graphic design business in Tullamore has too gone from strength to strength.

Jack signed all copies. George Cunningham said to Jack that if we could get him to come to Roscrea they would present him with the best fishing rod available (Jack’s passion outside of football was fishing).

“However, for now forgotten reasons, this was never followed up but was always in the back of my mind,” George told the Tipperary Star this week.

Some years ago he wrote to Jack’s wife Pat in their home in Newcastle, reminding her of the occasion and asking would Jack come to Coláiste Phobal so that finally they could present him with the fishing rod.

Pat wrote back to George sadly saying that owing to illness Jack no longer fished and while wishing everyone well could not avail of the offer.

“Jack gave so many memorable and lasting moments to so many, none more so than his followers in Roscrea. May his big gentle soul rest in peace” George said.