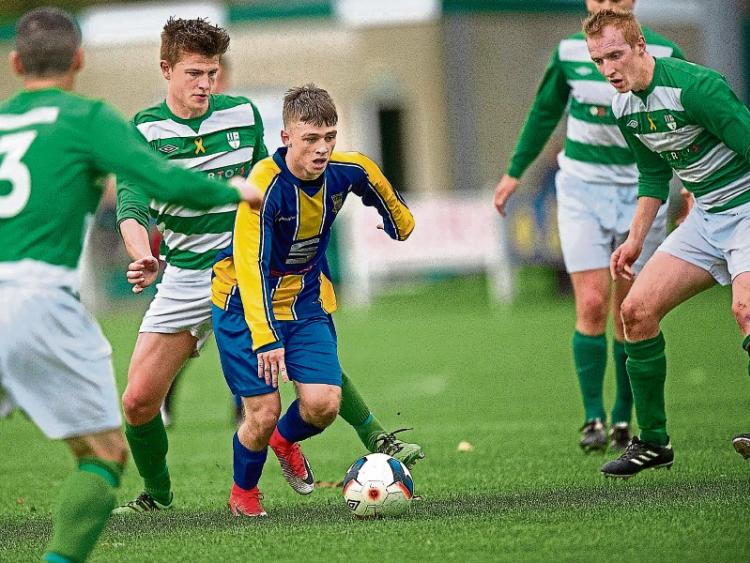 Willie Armshaw scored the second of St Michael's goals in their 3-0 win over Abbeyfeale United in the Munster Junior Cup.

St Michael’s produced a solid performance here completely dominating the second half and using their greater experience against a youthful Abbeyfeale side to advance to the semi-finals of this season’s competition.

With the Limerick Desmond side a little overawed the TSDL side took the lead on two minutes when Jimmy Carr collected a ball from a throw in and played in Shane Ryan who finished well from close range. Abbeyfeale nearly levelled straight away when Fiachra Cotter crossed but Barry Sheehy’s header looked to have gone in but went wide of the post.

Saints were surprisingly quite open at the back in the first half hour with Abbeyfeale getting a bit of joy down the wings through Fiachra Cotter on the right and Paudie Smith on the left.

But eventually the Tipperary side got into their groove and got a second when a Chris Higgins pass found Willie Armshaw running at pace towards the home area, and he hit a delightful ball from an angle that found the corner of the net to make it 2-0.

Any hopes of an Abbeyfeale revival were quashed six minutes into the second period, when Cormac Roche conceded a harmless free kick and Colin Bargary gave a slide rule pass to play in Jimmy Carr who finished well to effectively end the game as a contest.

Saints could then afford to bring in five substitutes and still coast to victory, readying themselves for what will surely be a sterner test when they meet old foes Fairview Rangers at Jackman Park in  Limerick at 5 pm this coming Saturday, August 8.