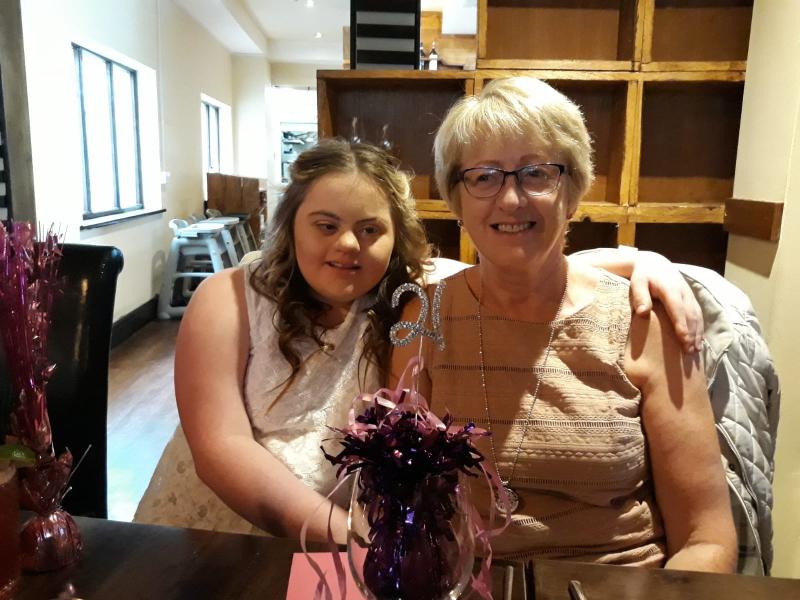 Making friends and learning new skills: Fiona McKennedy, Nenagh, who has Down Syndrome, has benefitted from funds raised by the Tour de Munster charity cycle, with, her mother, Jean

A Tipperary family whose daughter has Down Syndrome has spoken the importance of the Tour de Munster charity cycle is to them and other Down Syndrome people.

The annual tour takes place from this Thursday, August 6, until August 9 and will stop in Ballina at the end of its first leg.

Fiona McKennedy from Nenagh and her mother, Jean, are members of the Tipperary branch of Down Syndrome Ireland.

“The funds raised each year as a result of Tour de Munster are so important to the Tipperary branch of Down Syndrome Ireland,” said Jean. “We are very grateful to everyone who supports the tour.”

She said that the funds raised play a huge role in enabling the branch to provide vital services for children and adults with Down syndrome in Tipperary.

Outlining how Fiona, 22, has benefited from the tour, Jean said her daughter has been a member of the Tipperary branch since she was a baby.

The branch had been a huge support for Fiona from childhood to adulthood, she said.

“Over the past number of years, thanks to the funds received from Tour de Munster, Fiona participated in activities including dancing, cookery and computer classes provided by the branch which Fiona really loved,” said Jean

Most recently, Fiona completed the Latch-On Programme and her participation was partly funded by Down Syndrome Tipperary through funds raised by Tour de Munster.

Literacy and Technology Hands-On (Latch-On) is a two-year literacy programme for adults with Down Syndrome, providing opportunities for adults to continue their literacy development.

“Fiona really enjoyed the course and made some life long friends from across Munster over the past two years,” said Jean.

The Tour de Munster is now in its 20th year and will see cyclists travel 600km over four days across the six counties of Munster in order to raise vital funds and awareness for Munster’s branches of Down Syndrome Ireland (DSI), as well as individual beneficiaries.

Funds are urgently required in order for the branches to continue providing their vital services.

As a result of the COVID-19 pandemic, the Munster branches of Down Syndrome Ireland have seen the majority of their vital fundraising events cancelled over the past number of months, and are now facing increased costs as they prepare to reopen their doors.

Since its inception, the Tour de Munster has raised €2.8m for Down Sydrome Ireland.

Cycling legend Seán Kelly, a huge supporter of the Tour de Munster for the past 14 years, will also take to the road on August 6.

The cyclists will be in Birdhill at 6.50pm on Thursday before heading for an overnight stop at the Lakeside Hotel, arriving 7.05pm.