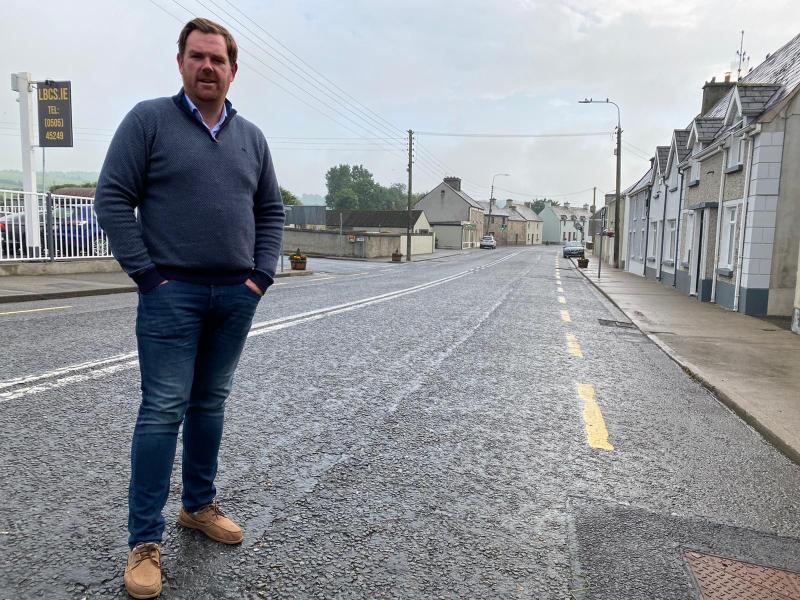 The village of Moneygall, which straddles the border between Tipperary and Offaly, has been “thrown under a bus”, according to one local businessman.

Offaly, Laois and Kildare were put on a regional lockdown last week following a spike in Covid-19 cases at three meat plants.

What has been described as a “ludicrous situation” has seen parts of the village under restrictions and the rest open for business. The village itself is in Offaly, with the outskirts in Tipperary.

Moneygall GAA grounds can open because they are in Tipperary, as can the Obama Plaza. However, the local soccer club has been forced to shut its gates.

“Offaly and Laois have been thrown under a bus to make it easier for Kildare to accept restrictions,” declared Darragh Hayes of Liam Buckley Car Sales on the Main Street. “They will never close Dublin, and we are seen as two gobs***e counties.”

He said that the garage had always traded as Buckleys of Moneygall, County Tipperary.

He said that they closed last time like everybody else when it was a level playing field, and business had picked up since they reopened.

However, he said that, with customers from Offaly and Tipperary, they would not be turning anyone away.

“Where do you draw the line,” he said.

Mr Hayes said the correct response would be close down Tullamore and other parts of Offaly affected by the spike in the virus and which were a considerable distance from Moneygall.

“We are a very low risk. We are taking all precautions,” he said. “We are in Tipperary and nobody has asked us to close.”

Mr Hayes pointed out that Obama Plaza at the end of Main Street, “one of the busiest motorway stops in the country” was open because it was in Tipperary, but the local Olly Hayes bar on Main Street was closed.

“I’m building a house 100 yards from the back gate of the garage, and I have to apply to Tipperary County Council for planning permission,” he pointed out.

A spokesperson for Supermacs, which runs Obama Plaza, said that they were in Tipperary and it was “business as usual” and they were fully compliant with all the regulations and guidelines.

James Scott, FAI development officer for North Tipperary, said they were taking the lockdown “on the chin”.

“The return of sports had been putting smile on people’s faces, but health is always the number one priority,” he said.

Mr Scott described the situation in Moneygall as “unusual”, saying they often ran five-a-side competitions there that sometimes took place in Offaly and sometimes in Tipperary.

“But it is just the way it is. Moneygall has always taken part in the North Tipperary league and maybe a case could be made to stay open. It comes at a tough time when the league has restarted,” he said.

The development officer pointed out, however, that, in fairness, the club’s players came from both sides of the border.

There was no response from Moneygall GAA club in relation to them being able to stay open while the soccer club shut.

Tipperary TD Martin Browne of Sinn Féin, said that it would be hard to convince the people of Moneygall to stay closed when they saw that Obama Plaza could remain open due to it being just across the border.