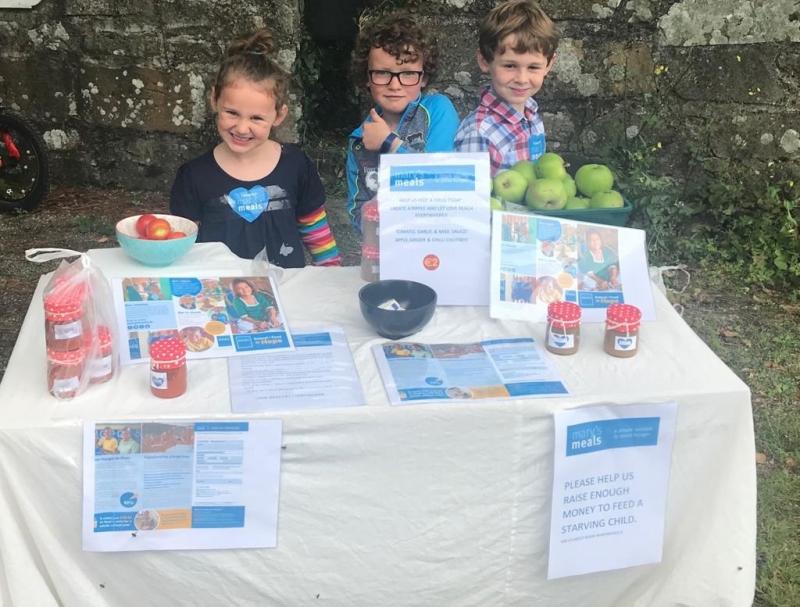 Little fundraisers: Gemma McBean and her brother Gabriel, with their friend Donncha O’Brien, centre, who raised funds for Mary's Meals

What began as a recycling initiative for two young Nenagh children as part of home schooling during lockdown has ended up feeding six children in some of the world’s poorest areas.

Gabriel, 7, and Gemma, 5, from Youghalarra, Newtown, planted tomato seeds in toilet rolls as part of their lessons during lockdown.

Gabriel is going into second class in Youghalarra National School this month, while sister Gemma is starting in the same school.

“We got into a bubble during lockdown, and we reminded them that it was not a holiday,” said their mother Danielle.

She said that while Gabriel and Gemma were happy to be off, they were told that there were others who would love to go to school.

“We explained to them that there were people who would love to be in their position,” she said.

With an abundant crop of tomatoes, Danielle wondered about finding use for them and as an avid supporter of Mary's Meals charity, the children decided, with a little help from mum, to set about turning the tomatoes into pasta chutney and selling it to raise money for the charity.

Just €18.30 will feed a child for a whole year, and, Danielle, said, the children hoped to raise enough to feed two children by selling their chutney outside their home.

However, with a little help from their friend Donncha O’Brien, who attends Aonach Urmhumhan Gaelscoil, and his mother Mary Brady, who supplied jam jars, they raised a whopping €104.62, which means that six children can be fed for a whole year and get to go to school.

“I am so proud of them,” said Danielle, who said people were so generous when they saw the stall. “They sold out and are already planning their next fundraiser.”

Mary's Meals normally fundraises in August through five walks that start simultaneously in different parts of Ireland and finish at Knock Shrine. However, in line with all charities, this year's fundraising has had to be curtailed due to Covid-19.

For anyone who would like to donate or get involved with Marys Meals, they can log on to www.marysmeals.ie