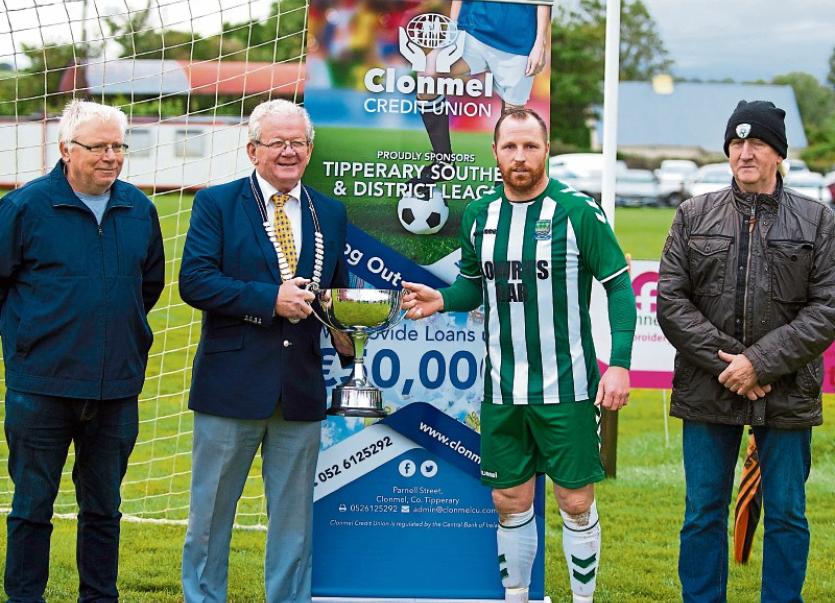 St Michael’s clinched their fifth Premier League win with a comfortable victory over Vee Rovers on a damp Saturday evening, that also confirmed that Vee Rovers would be heading back to First Division football after two seasons in the top tier.

The home side were on top from the beginning and had a few half chances before Mikey Nash made it one to nil in the sixth minute when he converted a Gavin Dillon cross from close range. It was two four minutes later, when Nash produced a good left foot finish to a Willie Armshaw cross, and John O’Brien almost added a third shortly after, but saw his shot tipped over the bar by the excellent Thomas Quirke in the Vee goal.

Saints again had a host of more chances before they finally got a third two minutes before the break, when David Slattery scored with a diving header from a Gavin Dillon cross.

Whatever chance that Rovers might have had of getting to the break and regrouping was destroyed in the final minute of the half, when Gavin Dillon let fly from twenty five yards out and his left foot shot nestled in the top corner of the net, to give his side an unassailable lead.  Saints continued largely on the front foot but with the aid of the hill, Vee saw more of the action in the second half. They were unable to make that extra possession count however and the visitors made in five when Chris Higgins forced the ball home at the far post following a corner kick.

Saints were awarded a penalty kick just on the hour mark when John Connery was upended but Joey Mulcahy’s spot kick was saved by Thomas Quirke. It was only a brief respite though and the champions elect made it six when Richie Ryan got on the end of a Cathal Berrigan cross from the right.

Vee Rovers had two decent efforts after that, firstly when Tom Flynn nipped in behind Chris Higgins, and when Liam O’Neill hit a good shot from distance that Derek Breen did well to tip over.

However, Danny O’Brien completed the scoring ten minutes from the end when he was on hand to force home a cross from Cathal Berrigan home at the far post. Chris Higgins accepted the league trophy and, in his speech, remembered the late Mick Flynn whom the Tipperary town club lost sadly in May and thanked both committees for ensuring the fixture went ahead despite the latest Covid restrictions. This made it five titles  in a row for the winners and on this years form, it’s going to take a very good side to stop them making it six, or more, in the seasons ahead.