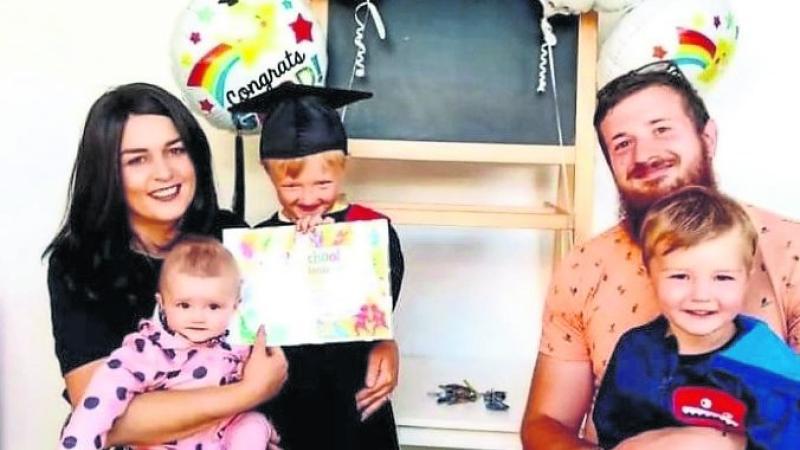 A funding appeal has been launched for a Tipperary mother of three young children who has been diagosed with a rare and incurable brain cancer.

The appeal has been launched by Jennifer O’Connor on behalf of her friend, Alannah Sheehan from Nenagh, who, along with her husband, Martin, are parents to Finn, 5; Luca, 3, and Phoebe, nine months.

After a long battle to purchase the house of their dreams in 2019 they became homeowners and parents for the third time to a girl and things were looking good.

Last January on the night of Phoebe’s christening Alannah had her first seizure, followed on February 15 by a second one.

She was admitted to hospital for a routine scan where they found a tumor one quarter the size of her brain.

The doctors gave Alannah two options: leave the tumor or go under the knife and attempt to remove it.

Alannah decided to go ahead with the awake craniotomy - surgery to her head while she was awake - and has two scars to prove it.

However, the operation was unsuccessful.

Three weeks later she received a phone call with the most devastating diagnosis. She had been diagnosed with a Grade 4 Cancerous Brain tumor, also know as Glioblastoma Multiforme, a rare incurable cancer. She was told she has only a 50% chance of surviving past two years.

Typical treatment for this cancer is 30 radiotherapy sessions and six months of chemotherapy.

Since she her diagnosis, Alannah has undergone 30 radiation treatments and was due to start her second round of chemotherapy last week.

Alannah has suffered multiple seizures since February and can no longer be left alone.

Martin has given up work to become a full time care giver to Alannah and raise three children.

The money raised will help Alannah fund future treatments to prolong her life.

Alannah’s only wish is for more time with her beautiful family. Time to make memories, says Jennifer.
Anyone who has been following Alannah’s story on instagram through @worth_fighting4 where she has documented her journey to date knows what an amazing, inspiring person she is. You will fall in love with this bubbly positive girl who needs everyone’s prayers and donations no matter how big or small, she says.

Jennifer says that all people are being asked to do is to help raise awareness of Alannah’s fight to #killthabetch. All you need do is share any picture of you wearing a hat and tag two friends (or as many as you wish).

“Thirty seconds work will go along way with helping Alannah raise the vital funds she so desperately needs,” says Jennifer.

We just want to say thank you for any support given, it really means a lot to Alannah and her family,” she says.

The GoFundMe campaign can be accessed at www.gofundme.com/f/z4xxfd-worthfighting4