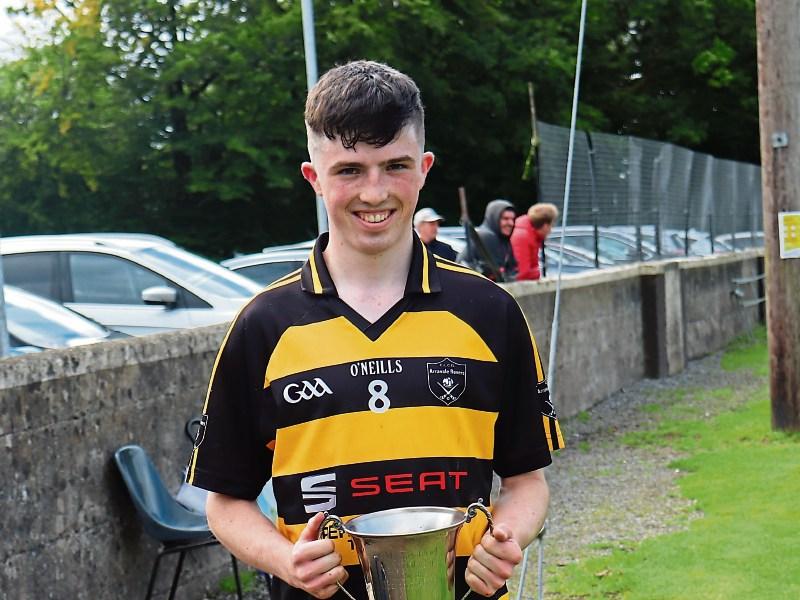 It was a game that could have gone either way with the game decided on two moments with three minutes of normal time to play.

Paddy O’Donnell’s save from Kyle Shelly was immediately turned down the field and following a ruck Niall Sharpe emerged, cut through the Moycarkey/ Borris half back line before scoring what would be the winning score of the game.

Arravale Rovers went into the game looking to claim their second title in the grade and go one better than twelve months ago when they were beaten by Borrisoleigh on a wet day in Boherlahan.

Arravale Rovers played into the railway end while Moycarkey/Borris played towards the village end in the opening half. Stephen Walsh got Moycarkey/Borris off the mark with a point from play but it was quickly cancelled out by an Evan Hawkins free. Bill Flanagan restored Moycarkey/Borris’s lead with another from play.

They soon doubled that advantage but it could have been more. Liam O’Meara was put through on goal and his effort off the ground was saved by Patrick O’Donnell in the Arravale goal who got down well. Kyle Shelly pointed the resulting 65. Moycarkey/Borris were dealt a blow when centre forward Joe Maher had to leave the field with an injury and he was replaced by Joey Ryan. Bill Flanagan moving out to centre forward as a result.

On the resumption Arravale got themselves back on par when corner forward Adam Dunne who had been consistent all through the championship split the posts twice in a minute with two well taken points. Joe Egan opened his account for Moycarkey/Borris but this was cancelled out by Raymond Kelly. With Kyle Shelly holding the centre back position it gave Kelly the option to roam a bit further out the field. Liam O’Meara hit Moycarkey/Borris’s fourth from play but another Evan Hawkins free tied up the game for the third time. Niall Sharpe who had been working hard but not getting the breaks soon remedied that with two quick fire points. Brian O’Meara responded with a point before the water break to see just a point between the sides 0-7 to 0-6. Ten of the thirteen scores coming from play. 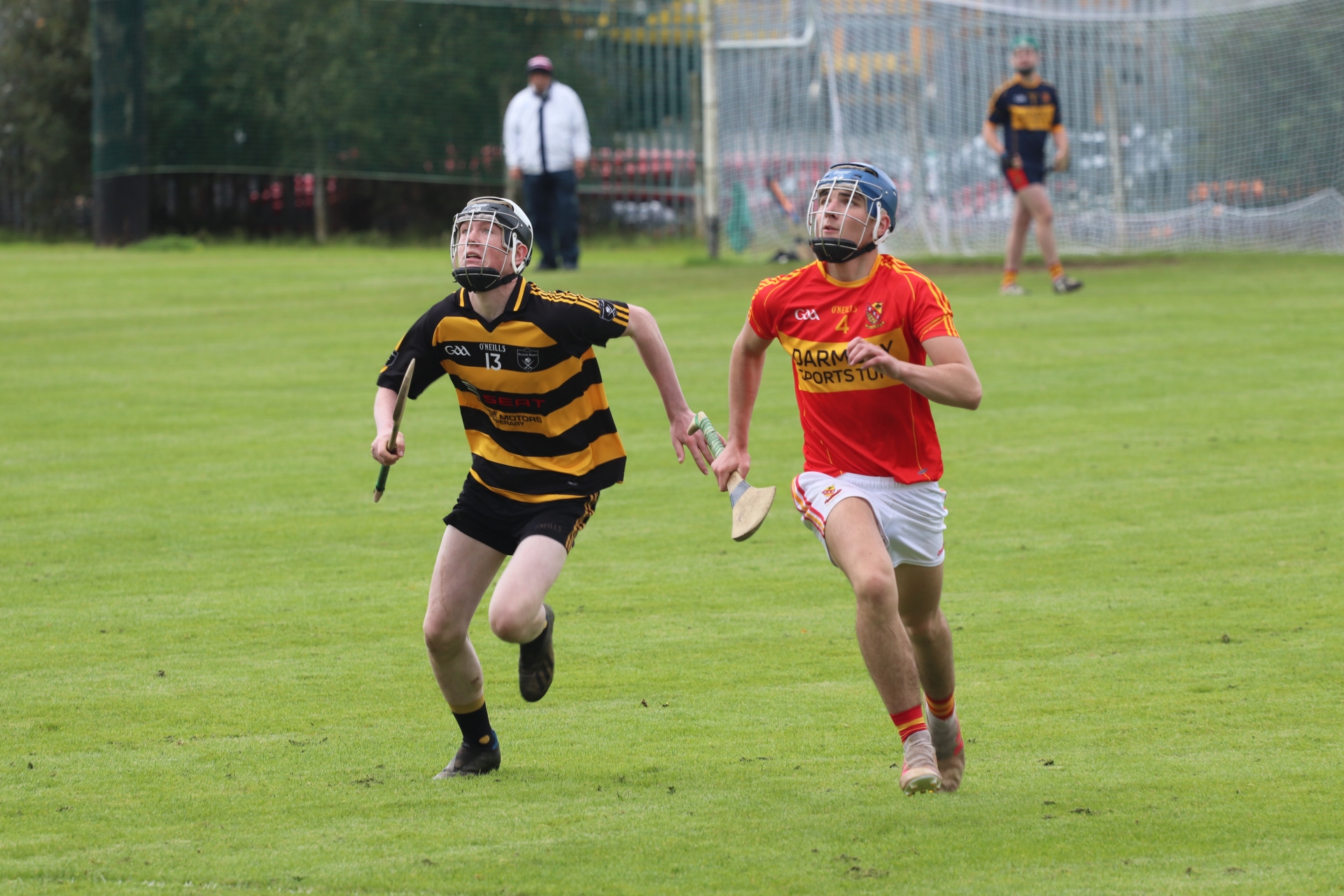 All eyes on the sliotar - Adam Dunne (Arravale Rovers) and Andrew Kavanagh (Moycarkey/Borris) in a race for possession during Sunday's County Minor ‘B’ Hurling Championship Final played at Dundrum.

Moycarkey/Borris were a different team on the resumption getting more stuck in but they failed to make this count on the scoreboard. They could have had the games opening goal but for a last minute tackle from Donagh Hickey. Arravale Rovers were living on the edge. Points from Caleb Molly Hickey and Evan Hawkins (free) pushed Arravale Rovers three points up. Liam O’Meara responded before a long range free halfway on the stand-side from Kyle Shelly went all the way over the bar.

It was now tit for tat and Raymond Kelly and Evan Hawkins (free) pointed for Arravale. Another Kyle Shelly free from a similar position again split the posts before  half time. Arravale Rovers ahead 0-11 to 0-9.

Arravale Rovers got a dream start to the second half when Niall Sharpe won the throw in broke through the half back line before laying off to the unmarked Gavin O’Meara who shot straight to the net giving Tristan McCormack Ryan no chance in the goal. Kyle Shelly pointed two further frees either side of an Eoghan Lonergan point for Arravale.

Four points in it, Moycarkey/Borris gradually worked their way back into contention. Joe Egan, Joey Ryan and Kyle Shelly (two frees) all pointed to tie up the game 11 minutes into the half. Evan Hawkins unerring from placed balls gave Arravale Rovers a slender advantage but it was quickly cancelled out by a Liam O’Meara free at the dressing room end. Midfielder Stephen Walsh had the last say as he pointed before referee Noel Cosgrave signalled for the water break.

Evan Hawkins levelled on the resumption but Arravale Rovers continued to concede frees. They were remaining in the lead only for missed chances from placed balls for Moycarkey/Borris.

The Mid champions had now also withdrawn players from their half forward line towards midfield and this was creating a lot of space inside but they struggled to find the target.

Niall Sharpe pointed twice to give Arravale Rovers a two point advantage with six to play. Sean Britton who had just come on the field found himself bearing down on goal only to be brought down for a penalty. Up stepped Kyle Shelly who hit a rasper of shot straight at Patrick O’Donnell. O’Donnell was unnerved, stopped the shot bounced once on the hurley and cleared down the field.

Niall Sharpe then gathered possession from a ruck before breaking out and pointing what would be Arravale’s last score but a winning score. Again, Arravale Rovers discipline was in question and Kyle Shelly who had now moved to full forward pointed two close range frees. The game was now in the melting pot as the clock hit the red and every chance and every possession was vital for both teams. Kyle Shelly looked as he would send the game to extra time when he gathered possession out past the 21 yard line but his effort just drifted the wrong side of the posts. With that Noel Cosgrave blew the final whistle to celebrations from the Arravale Rovers players and management.

Best for Arravale Rovers were Patrick O’Donnell in goal. In defence Shane Maher, Eamon Ryan were to the fore while Donagh Hickey was impressive at centre back, his hook in the second quarter was vital when Moycarkey/Borris were on top. Niall Sharpe led by example and finished with five points from play. Evan Hawkins played a vital part again for Arravale Rovers with his contribution from placed balls.

The Moycarkey/Borris defence was strong through-out with exception for the goal they limited Arravale Rovers any real goal chances. Thomas Whelan was solid at full back as were Andrew Kavanagh and Kyle Shelly in defence while Stephen Walsh was strong in the middle and picked up two points from play. Lewis Kearney worked hard and tracked back to help further back the field. Bill Flanagan started full forward but was moved to centre forward where he got onto a lot of possession. Liam O’Meara was always a threat and finished with four points.