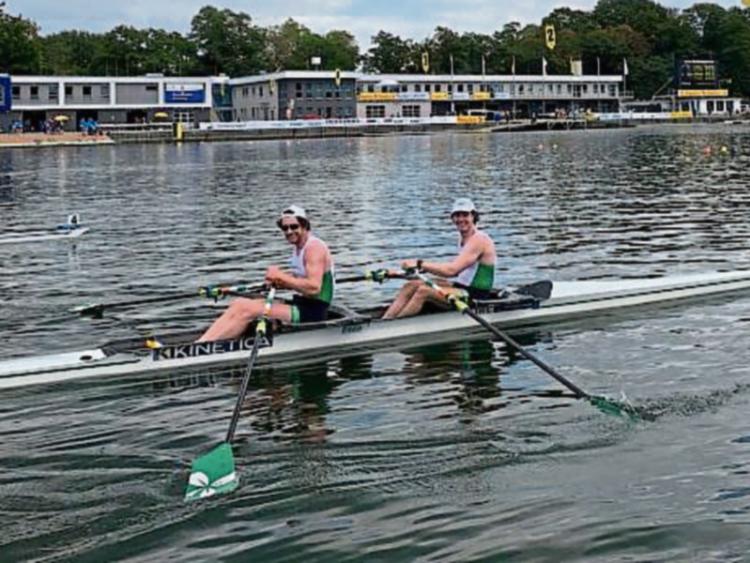 Daire Lynch and Ronan Byrne at the Europeans in Duisburg, Germany where they won the gold medal.

At a European Under 23 rowing  event in Duisburg, Germany last weekend, Clonmel Rowing Club’s Daire Lynch teamed up with Ronan Byrne from Cork in the doubles event to take the gold medals.

The semi- final was early on Sunday morning and again the lads performed well and took first place again. Winning the semi-final also gives you one of the preferred center lanes as it enables you to see and be aware of what is happening left and right of you down the course.

The final was on after lunch at 3pm. Ireland were in lane 3. Off the start the lads were in the bunch and were fourth after the first 250 meters. There was a bit of a steering wobble during that period that would have cost then a meter or so. The German crew led after 500mt with Spain in 2nd and Ireland in 3rd beginning to make inroads. The German crew started to fade and the Irish and Belarus crews powering through to take the lead with Ireland in front at the halfway mark ahead of the Belarus crew with Spain in third. From there on in the Irish crew kept piling on the power with sublime catch speed increasing their lead all the way to the finish line to win the Gold medal in a time of 6:23.56 winning by a margin just shy of a length of clear water.

Congratulations from all at Clonmel RC to Daire and Ronan and to Daire parents Niall and Joanna. The first Clonmel man to race at an Under 23 championship and to finish with Gold is fantastic.

Ireland came home with a total of five  medals from this competition comprising two  golds, one  silver and two bronze.  This was a great achievement .

The lads are off to Italy now for another two-week camp in preparation for the Senior Europeans in October. Good hunting.

The club AGM will take place virtually on September 24 at 7pm.  If you are a member and have not received your invite by other means, please apply for a link to the meeting through clonmelrowing@gmail.com