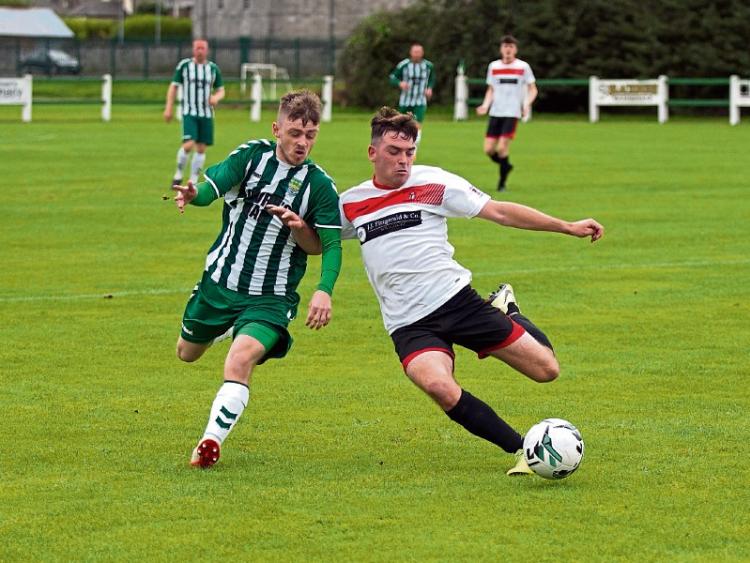 Thurles side Peake Villa upset the odds on Sunday afternoon at Cooke Park, Tipperary ,when they came from behind to beat league champions St Michael’s and deny the Tipperary town side the opportunity of completing a league and cup double.

It would have been a brave person that would have called the result before the game, but Villa did finish second in the recent league and have been closing the gap on their illustrious opponents for a number of seasons now, and may look on this game as one where they can contemplate a changing of the guard at the top of Tipperary football in the near future.

Peake started well and Frank McKevitt almost caught out the home defence with a quick cross field ball in only the second minute, but his effort was scrambled away to safety.

When the home side settled a bit they began to also make chances with Joey Mulcahy failing to connect cleanly with a Gavin Dillon free kick, when the Villa defence looked flat footed in the tenth minute.

Both sides were using long passes when more controlled short balls might have been more effective and the game had to wait until two minutes before the break for the opening score when Joey Mulcahy made a strong run from midfield to finish well from the edge of the box.

The second half followed the same pattern as the first, but a pivotal moment arrived when the Saints were reduced to ten men after they lost a player to a second yellow card infringement. Peake with the extra man carved out more territory and began to pin the hosts back, a situation they were not used to in recent times in domestic football.

But they looked to have weathered the storm until the visitors finally got a deserved equaliser seven minutes from time when a Keith Cahill free kick sailed over the head of the rooted Saints keeper and nestled in the corner of the net.

At this point both sides looked leg weary after the long season and it looked as if the tie was heading to extra time. However, with just a minute of normal time left, the Thurles side forced a series of corners and eventually substitute Eoin O’Dwyer rose unchallenged to head home Mikey Wade’s delivery and give Villa the lead. This forced the home side to throw men forward and when they did, they were inevitably caught with a  counter attack after Frank McKevitt ran through in stoppage time on to a poor clearance and had the space and time to pick his spot and secure the win.