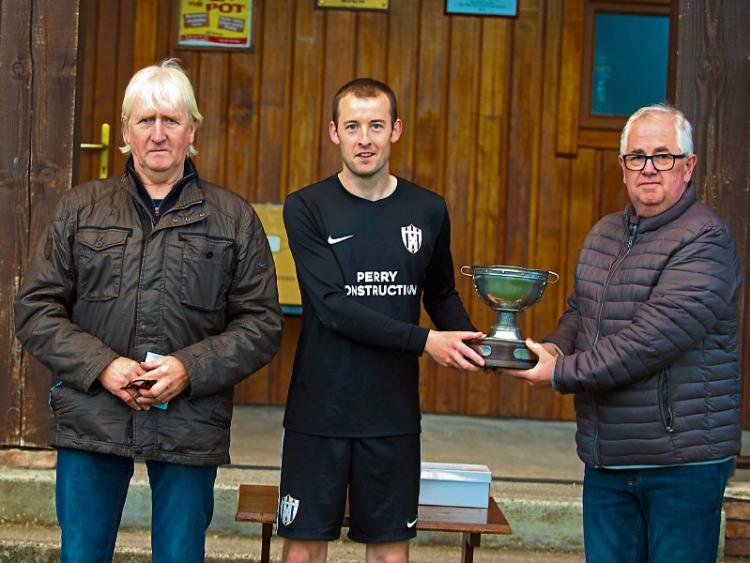 Galbally United went into this game as underdogs but emerged at the end as the top dogs in this Paddy Purtill Cup final between two local  rivals on a perfect evening for football at Cahir Park last Saturday evening.

The First Division side was shorn of a number of first team players due to suspensions and injuries, but still started the better of the two teams and won most of the early midfield exchanges.

Galbally however are nothing if not doggedly stubborn and they slowly worked their way up to the pace of the game, before opening the scoring in the 11th minute when a corner kick from the right hand side of the Town area, eluded the mass of players in the box and went all the way to the back post where the unmarked Eoin O’Mahoney slammed it back to the far corner of the net to give his side the lead.

Stung by this the First Division side made a number of good chances but were unable to break down the strong Galbally defensive line. The best chance for Tipperary Town in the first half came just before the half hour mark when again a corner kick was fired across the Galbally back line, but Town were unable to emulate their opponents and the ball was cleared away to safety.

Half-time came and there was an air of expectancy that Tipperary Town would raise their game in the second period, but they looked to have gone a second goal behind three minutes in when Galbally had the ball in the net only for the referee to call the game back for an earlier offside decision. It was but a momentary relief for Town as within 90 seconds the Second Division side again cut them open down the left and when the ball fell to O’Mahoney at the back post he made no mistake in doubling his side’s advantage.

Things got even worse for Tipperary Town six minutes later when they were reduced to ten men after a second yellow card offence, and after that the best of the chances fell to the team in front.

Substitute Ger Quinlan almost added a third when he took a ball around the keeper but it was miraculously cleared off the line by a Town defender. And Eoin O’Mahoney thought that he had also claimed his hat-trick four minutes from time, only to be also denied by a last gasp goal line clearance.

However, in the final minute Galbally sealed the deal when Ger Quinlan ran on to a quickly taken free kick from defence and put in an inch perfect cross for Jamie Morrissey to score from close range and put the icing on the cake of a brilliant performance by the cup specialists.