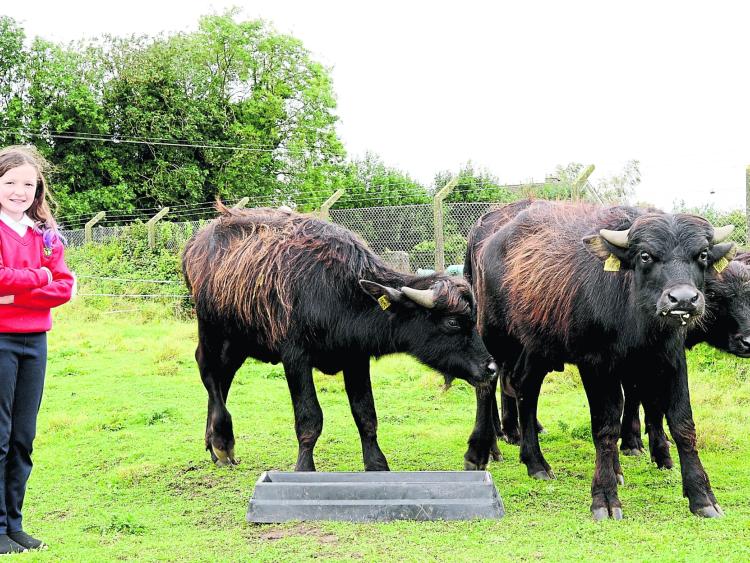 Oh! give me a home where the buffalo roam: Grace Ryan, 11, from Mill Road, Thurles, with her four buffalo calves at home on the range which she and her dad Michael purchased at Thurles Mart

She may be only 11 years old, but Grace Ryan from Mill Road, Thurles, is Tipperary’s, - if not Ireland’s - youngest owner of a buffalo herd.

Grace was one of the lucky ones to get to buy at last week’s first sale of buffalo calves in Ireland, which was held in Thurles Mart.

A sixth class pupil at Dualla National School, her dad Michael revealed that Grace had bought four calves at the sale out of money she made selling her own cattle which she raised last year.

Michael revealed that the four calves cost a grand total of €2,680.

Michael runs a beef farm and said they bought the buffalo to diversify.

“We are getting nothing for beef at the mart,” he said.

The plan is to buy another 50 or 60 calves from seller Johnny Lynch in Macroom this week and to sell most of them on.

“Already we have had 20 people come to see them and if people want to come see them they can,” he said. The buffalo are being kept at Carrigans Farm on the outskirts of Thurles.

About eight farmers had since expressed at interest in buying from him.

Buffalo meat is classified as organic and healthy, and Dermot Delaney of Baileys Hotel in Cashel has already been in touch to buy the meat and is hoping to have it on their Christmas menu, he said.

Michael said the buffalo were ideal for the old style ditch farm that he runs.

“They are hardy and docile and love rough land,” he said.

The sale attracted huge interest, with about 600 people in total viewing the buffalo, and Michael was full of praise for the way Thurles Mart manager Martin Ryan ran the sale.

Michael is hopeful that the first buffalo sale in Thurles will turn the local mart into the centre for any future sales.

Michael said that he had told Johnny Lynch that when he comes to buy the buffalo, they will be weighed in Thurles and will only be sold in Thurles.

He is also hoping that when it comes to slaughtering them, that, too, will will be done in Tipperary.