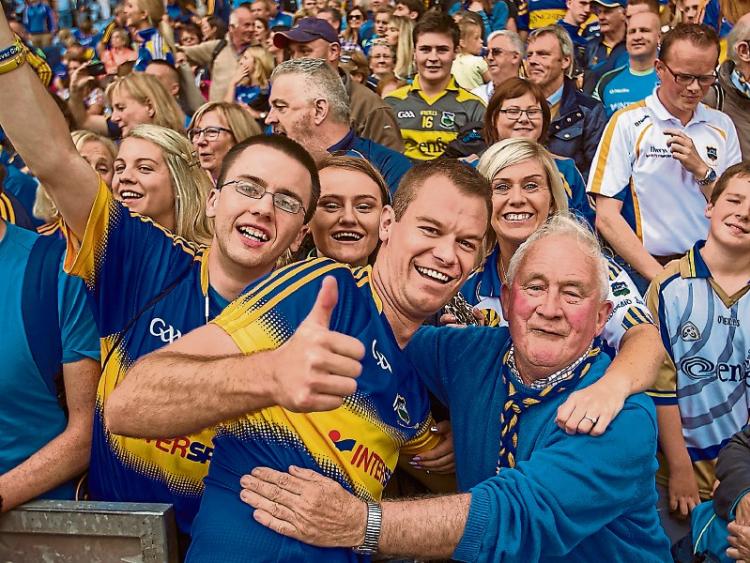 Rockwell Rovers reached the final of the FBD County Intermediate Football Championship in devastating fashion when they eased past Moyle Rovers in Cahir on Saturday afternoon.

The West Tipp side were on top from beginning to end and at times ran an understrength Moyle Rovers side ragged, scoring seven goals in the process.

Tipperary senior footballer Alan ‘Rocky’  Moloney was in imperious form and combined brilliantly throughout the game with Eoin Byrne and TJ Ryan. The trio scored 7-10 between them and it could have been more only for some outstanding saves from Moyle Rovers goalkeeper Ian Browne.

Rockwell showed their intent as early as the second minute when Moloney released Ryan through on goal and when Ian Browne advanced to close down the shooting angle, Ryan squared the ball to Eoin Byrne who fisted the ball to the net.

Just three minutes later, Byrne returned the compliment and set up TJ Ryan who made no mistake to double Rockwell’s lead and already Moyle Rovers were facing an uphill struggle. Byrne added another point soon after before Paul Shanahan responded for Moyle Rovers but worse was to come for the South side.

In a blistering 15-minute spell Rockwell scored 2-06 to effectively kill the game by half-time. Moloney notched 1-03 during that period and TJ Ryan 1-02 as the pace and power of Rockwell had Moyle Rovers in all sorts of trouble. Their only response was a point each from Paul Shanahan and Luke Delahunty but it made little difference to the scoreboard which showed a gap of 17 points at the half-way stage.

Shanahan was on target again in the early stages of the second-half as was Ian McGrath, who had replaced Shane Lonergan, but the points kept coming at the other end, this time from Liam Fahey, Gavin Ryan and Alan Maloney.

By now, Rockwell looked like scoring whenever they were in possession and Eoin Byrne punished Moyle Rovers again when he was afforded to much space to blast past Bowne for the games 5th goal.

Both sides traded further points as the game came to a close but the final word was left to Alan Maloney who showed all of his quality to find the net for the third time in a man of the match performance.

On this showing Rockwell Rovers will be huge favourites going into the final and had star performers in Maloney, Eoin Byrne, TJ Ryan and Liam Fahey.

Moyle Rovers will be disappointed with the result but will take positives from the performances of Brian Lacey, Luke Delahunty, Rian Clancy, Conor McGrath and Cian Crowe who battled gamely throughout.