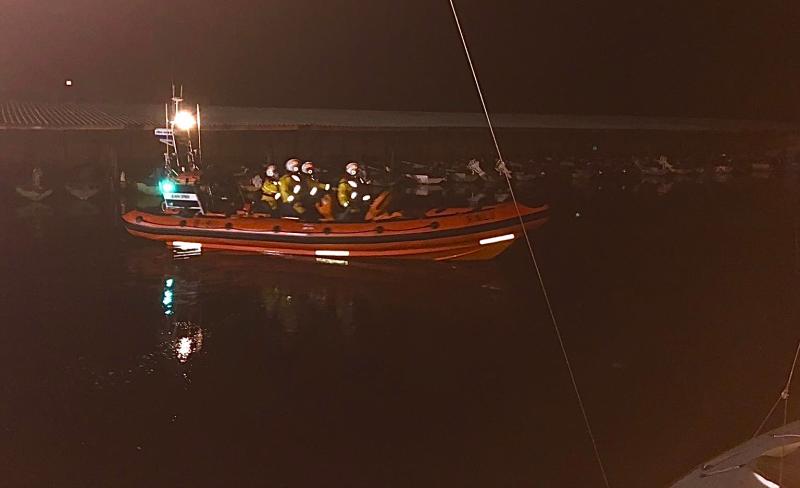 Lough Derg RNLI based in Dromineer carried out its second nighttime mission this week days when it went to the assistance of three people on board a 20-foot cruiser that suffered engine failure on Tuesday night.

The lifeboat crew was called out at 8.25pm on Monday, September 7, to assist four people on a 35ft cruiser reported to be aground near Terryglass Bay.

At 8.55pm on Tuesday September 9, Valentia Coast Guard requested Lough Derg RNLI lifeboat to assist three people on a 20ft cruiser with engine failure and drifting by Bellevue Point, above the Goat Road, at the north-eastern end of Lough Derg.

At 9.19pm the lifeboat launched with helm Eleanor Hooker and crew Owen Cavanagh, Steve Smyth and Doireann Kennedy on board.

Though nightfall, it was a clear night. The lifeboat volunteers used all onboard electronic navigation aids and local knowledge to navigate to the casualty's location. Winds were southwesterly, Force 2.

Valentia Coast Guard informed the lifeboat volunteers that they had requested the casualties to flash a light once they saw the lifeboat, which they did as the lifeboat approached Bellevue Point.

RNLI lifeboat crew took soundings as they approached the casualty vessel, which had drifted into reeds close to the shore, but was still in two metres depth. The lifeboat was alongside at 9.41pm.

The three people on board were found to be safe and unharmed. A lifeboat volunteer was transferred to the motorboat and set up for a tow.

The lifeboat towed the motorboat with her three passengers and an RNLI volunteer remaining on board, to Dromineer Harbour, where it was safely tied alongside at 10.22pm.

Peter Kennedy, deputy launching authority at Lough Derg RNLI, has advised boat users to "make sure your engines are fully serviced, and that you have sufficient fuel for your journey. Always carry enough lifejackets for everyone on board and that they are worn".

It was the lifeboat's third callout this week having been called to assist a cruiser on Sunday afternoon.