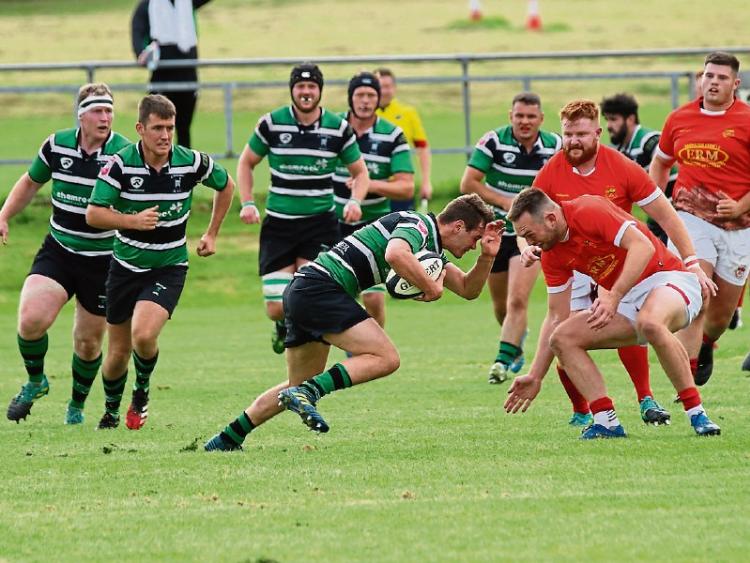 Both of these clubs played their last copmpetitive game on the last Saturday of February 2020 in the All-Ireland League campaign which was not completed and had not met in competitive action since Cashel gained senior status in 2011 followed by Clonmel two seasons ago.

While the game was eagerly awaited that anticipation was greatly tempered by the sad news that Cashel minis player Cormac O'Brien had died suddenly the day before the game – an immeasurable tragic loss for his family. A minute’s silence was observed in his honour.

Clonmel had the better of the exchanges for the first 20 minutes and their big ball carriers David O'Gorman, Neville Melbourne, Tony Cantwell and Eoin Breen were gaining ground at every opportunity. Their backs were willing to run the ball and Cashel had to be at their best to keep their line intact.

With a certain amount of rustiness evident and the new interpretation of the rules at the breakdown the penalty count was extremely high which was most frustrating for the players. Cashel had a man in the bin after ten minutes.

As the second quarter commenced Cashel gradually got a grip on the game. Mikey Wilson, Ciaran Ryan, Fearghail O'Donoghue and Robin Foot led the charge and a swift move involving backs and forwards brought play to the Clonmel five metre line. Cashel were awarded a number of penalties and opted for scrums.

On 22 minutes they opted to kick and Dan O'Neill put them three points ahead with a penalty. The penalty count began to mount and following a keenly contested ruck a number of players were spoken to and to the astonishment of the Cashel team a Cashel player was shown a red card. Two minutes later a Clonmel player was sent to the bin.

Cashel continued to dominate but the Clonmel defence was solid Three minutes before half time Cashel were awarded a scrum five metres out. Number eight, Mikey Wilson picked and charged over for a try under the posts which Dan O'Neill converted. Clonmel had the last word in the first half when Dylan Cadogan kicked a fine penalty into the wind. Half time score Cashel 10 Clonmel 3.

As to be expected... there was nothing asked for or given in the Munster Senior Cup game game between Cashel and Clonmel last weekend.

Clonmel had the advantage of the wind in the second half but Cashel recommenced in brighter fashion. Dan O'Neill put in a huge tackle resulting in a penalty for his team. He kicked to the corner, Cashel won the lineout, fed Josh Pickering who raced to the line to score.

Back came Clonmel using their pick and drive game to great effect. Ciaran Ryan drove them back, Cormac O 'Donnell won the ball at the breakdown and the danger was cleared. Two minutes later Dylan Cadogan kicked a fine penalty for Clonmel from the ten metre line. They continued to press and were over the line on 60 minutes but Cashel captain Cathal Ryan held up the diving player.

At this stage the numerical advantage was putting huge pressure on Cashel but their defence was excellent. To a man they tackled time after time. When Clonmel got a nudge on a five metre scrum Ciaran Ryan again came to the rescue.

Then came the turning point in the game. As Clonmel ran the ball on half way Josh Pickering intercepted and raced to the corner. He was almost at the line when a Clonmel defender tackled him high. Cashel were awarded a penalty try and the Clonmel player received a yellow card. Back came Clonmel again and Cashel had to defend but had another man in the bin with five minutes remaining. Clonmel had the final word with a try by Andrew Daly and a conversion from Dylan Cadogan. Final score Cashel 22 Clonmel 13.

This was a full blooded and entertaining cup game played in an excellent spirit by these close neighbours. Yet there were five yellow cards and a red and not one foul stroke.

Both teams have room to improve but both must take credit for producing such an entertaining game after such a long layoff. It is great to see rugby games being played again and hopefully supporters will soon be allowed enjoy them.