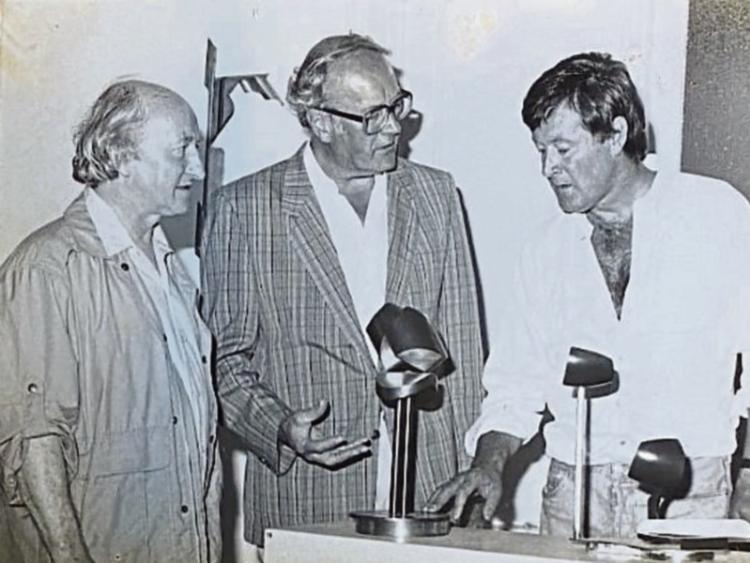 John Burke (right) with Michael D. Higgins and Dr Colm Ó’hEocha at the opening of John’s exhibition Camus Arc at the Triskel Arts Centre in Cork

Not many people in Clonmel may be aware that the creator of the sculpture piece Red Cardinal (a regular sight on RTE news reports), commissioned by Ronnie Tallon for his signal architectural project, the Bank of Ireland’s former headquarters on Baggot Street in Dublin, was born and educated in the town.

Today his work is known in Clonmel through a public art project at the entrance to the LIT campus in Clonmel and a maquette (a scale model or rough draft of an unfinished sculpture), now on display in the Tipperary County Museum, for a Dutch project from the 1970s.

An exhibition composed of maquettes of John Burke’s key projects is now on display in the South Tipperary Arts Centre in Nelson Street, Clonmel and continues until Sunday week, September 20.

John Burke, who died in 2006, was originally from O’Connell Street, Clonmel, the son of Madeleine and Thady Burke.

Having attended CBS High School and the Central Technical Institute (where teacher Barry Moloney was an inspiration), he studied at the Crawford School of Art in Cork.

There, his gift was recognised by John O’Leary and his other tutors, and in 1967 he was awarded the Student of the Year prize.

Three years later his further studies were enhanced when he was awarded the McCauley Fellowship to study sculpture at the Royal College of Art in London, where he was tutored by Brian Kneale.

In 1973 he had his first solo show in the gardens of Jury’s Hotel in Cork, and from there went on to exhibit nationwide and in New York.

His pioneering artistic streak was developed not only within his own practice but also at his alma mater, where he lectured throughout the 1970s and was the first tutor to work in welded steel.

While there he was influential to a new generation of sculptors, as his students included Maud Cotter, James Scanlon, Eilis O’Connell, John Gibbons and Vivienne Roche.

Many of the pieces in this show are on exhibit for the first time, offering audiences a unique opportunity to engage with the work of one of Ireland’s masters of modernist sculpture and public art.

The exhibition is curated by the well-known art historian and curator Catherine Marshall, who is a member of the Arts Centre board. She has curated exhibitions as far afield as China and Canada, as well as all over Ireland, and has

published widely on different aspects of Irish art and the representation of Irish history.

Booking is not essential, however only four people are allowed in the gallery at any one time in line with Covid-19 guidelines. Booking is recommended for groups - contact info@southtippartscentre.ie