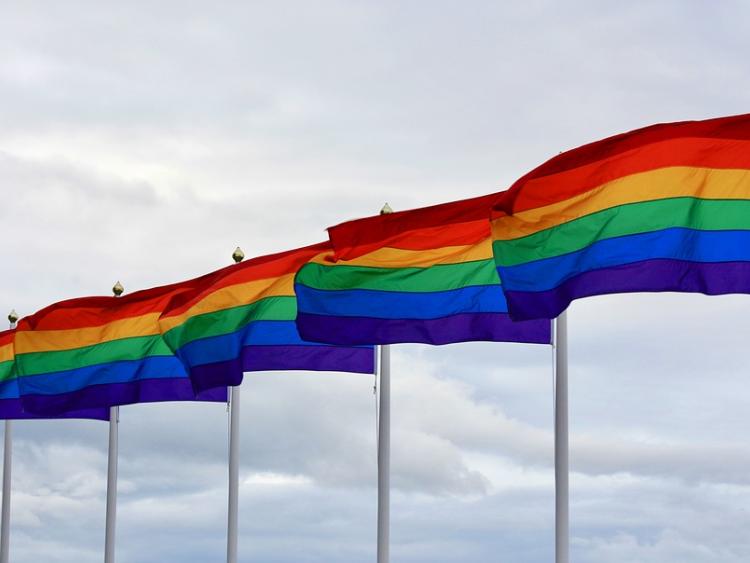 What struck me around the town was the amazing colours and energy which the Clonmel Community Pride brought to the town.
Rows of colourful bunting crisscrossed the streets, with rainbow flags fluttering in the breeze, outside the main post office. Gerard Sweetman, along with his team managed to do that trick of hosting a festival in the middle of a pandemic. One afternoon I went along to see the ‘Pride Car’ and the flag unfurling at the Garda barracks, on Emmet street and I was impressed with the warmth of the welcome offered to all by Gerard and his team. They are a credit to the LGBT+ community, here in south Tipperary. In many parts of the world the LGBTI+ family suffer horrific treatment at the hands of narrow-minded bigots. It is heartening to see that here in Clonmel the LGBTI+ community are treated as valued citizens. At the unveiling of the Garda pride car I bumped into local community activist Thomas Ryan. Thomas is a dedicated community volunteer and I don’t have enough column inches to list his areas of interest. I asked Thomas about local, community volunteering, and what message did he have for community groups around the town? His message was simple, “aim high”. Again, I would like to extend my congratulations to Tipperary Clonmel Community Pride 2020, on a very successful Festival.
The other night I had this very strange dream. In my dream, I was standing in a plush room in Áras an Uachtaráin and clasped tightly in my hand was a silver medal, which had been presented to me, by none other than the President himself.
It seems – in dream land at least – that I was the new Minister for Agriculture. Just before I awoke, the medal – my seal of office – was grabbed from my hand and tossed skywards. The last thing I remember was the sight of several T.D.s scrambling around the floor frantically searching for the coveted prize. Of course, that was, but a dream and nothing as absurd as that could ever happen in real life.
September is a time for saying goodbye to the summer and welcoming in the Autumn. As I mentioned in a previous column, I’m not much into personal development.
I have a family of elderly Aunts and Uncles most of whom are close to ninety years of age and some are gone beyond. They’ve never heard of personal development or cholesterol. That generation ate a half pound of lard for breakfast and then went out and did a hard day’s work. I guess I’ve inherited some of that ‘just get on with it’ attitude.
Yet, last year I took a course in computers in my local ETB centre. I was never great with these machines, but the commitment of the tutors blew me away. The patience shown to every student was second to none. How the Tutor managed to stay patient with us while we spent the first part of every lesson feebly attempting to ‘log-in,’ I’ll never know. Then a strange thing started to happen; we improved slowly but surely week by week. Until, all of us were well able to manage our way around the basics of computers. So, I guess some part of me needs an amount of self-improvement, if only to write this column every couple of weeks. I strongly recommend an ETB course to anyone considering it and I will be starting a Level 4 in computers, at the end of the month. However, you won’t catch me doing Pilates in Mulcahy park, not for a while at least.

WE ARE LEEDS, WE ARE LEEDS WE ARE LEEDS!
This column has sparked a minor diplomatic incident among Leeds United supporters. It seems that the omission of Johnny Campbell’s name from the list of United’s top supporters was a grievous error on my part. This mistake was pointed out to me by one, Johnny Landy, outside the post office the other morning. Johnny told me, that although Johnny Campbell is a loyal supporter of Leeds United that he should not be so upset with himself as, “he (Johnny Campbell) only began supporting Leeds when he was 25”. I hope this clarifies matters. Until next time.