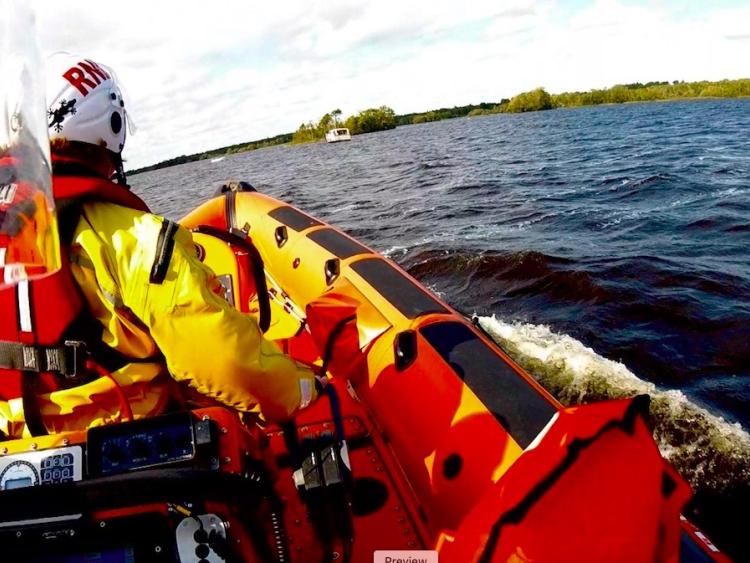 The first incident included two people on a 32ft cruiser aground by the Silver Islands on the Galway shore at the northern end of Lough Derg, and shortly after, a Mayday call to four people on board a 16ft motorboat taking on water in rough weather south of Parker’s Point on the southwestern end of the lake.

Shortly after 1pm on Sunday, September 13, Valentia Coast Guard requested Lough Derg RNLI lifeboat Jean Spier to assist two people on a 32ft cruiser reported to be aground by the Silver Islands, inside the red marker ‘Juliet’.

The lifeboat launched with helm Eleanor Hooker and crew Steve Smyth, Doireann Kennedy and Chris Parker on board. As the lifeboat approached Cloondavaun Bay, the volunteer crew could see three vessels on standby in safe water monitoring the casualty vessel.

The lifeboat was alongside the casualty vessel at 1.46pm. Both people on board were safe and unharmed and wearing their lifejackets. An RNLI volunteer transferred to the casualty vessel. Once he was satisfied that the vessel was not holed, he set up for a tow.

The lifeboat had the cruiser off the rocks and towed out into safe water where drives and rudder were checked and found to be in good working order. The lifeboat took their crew member back onto the lifeboat and the cruiser made it’s way safely to Cloondavaun Bay Harbour. The lifeboat departed the scene and was back at station at 2.25pm.

At 4.30pm Valentia Coast Guard requested Lough Derg RNLI to assist 4 people on a 16ft motorboat taking on water in rough weather and in danger of sinking. At 4.40pm Lough Derg RNLI launched with helm Eleanor Hooker and crew Ger Egan, Doireann Kennedy and Tom Hayes on board. Winds were southwesterly, Force 5 with moderate chop.

Peter Kennedy, Deputy Launching Authority at Lough Derg RNLI praised the RNLI volunteers for their ‘swift response to the callout. Four people were reported to be in grave and imminent danger, and the efficient shore crew assistance was particularly crucial to a speedy launch of the lifeboat under these circumstances.