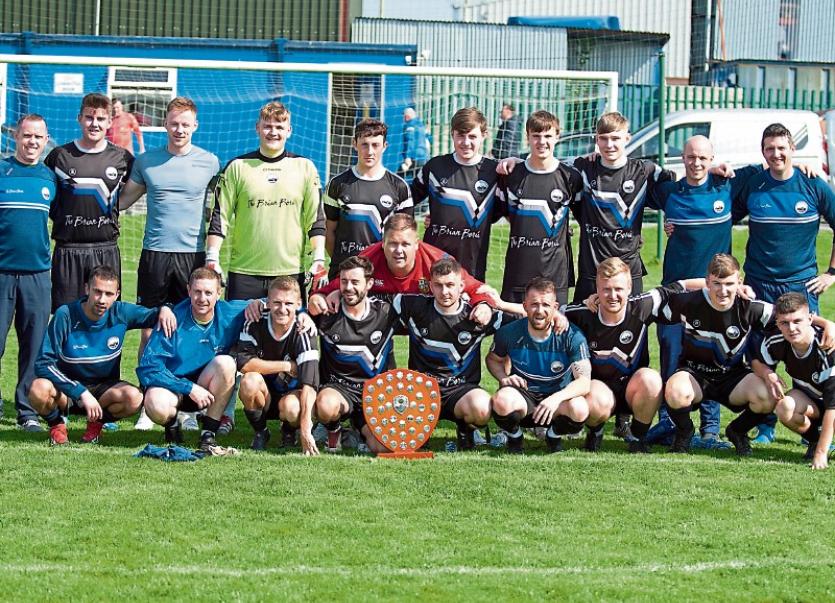 Cashel Town completed a First Division League and cup double on Sunday at the Arra Road in Tipperary Town, when ace striker James Harding put in a five star performance to put the home side to the sword.

But while the final score may suggest that the champions had  it easy in this tie, they had to twice come from behind before they made sure of the extra silverware.

There was an added spice to the game too, courtesy of the fact that the last meeting between these sides saw the home side travel to Cashel and unexpectedly knock their rivals out of the Paddy Purtill Cup at the semi-final stage, and when Stephen Quinn evaded two tackles before firing to the net to put the hosts in front in the eighth minute, the Cashel management might have felt they were playing against a bogey side.

They had no need to worry for their players however, as the visitors settled down and began to slowly take control of the ball and the midfield areas, while constantly using the speed of Cathal Quinn and Mikey McDermott coming from the wings. They forced a corner kick in the 18th minute and when the ball came across it was audaciously back heeled by James Harding, against the post before being scrambled away to safety.

It was a sign however, of the confidence of Harding to try such a trick.

A minute later McDermott launched a huge throw into the home area which the goalkeeper had to scramble away as Cashel began to slowly turn the screw in pursuit of an equalising goal. And it finally in the 24th  minute, when Mikey McDermott cut in from the right endline and jinked past three players causing havoc in the home defence. It looked like he’d missed his chance to shoot though, before he managed to toe poke a pass to James Harding, and while everyone else in the vicinity looked to be rushing around in blind panic, Harding casually slid the ball to the net with the keeper rooted to the spot.

At this time, Cashel were completely dominant and the home side were only managing very rare forays into the visitors area, but four minutes after the equaliser Stephen Quinn stole along the edge of the area and caught Cashel net minder Gearoid Slattery by surprise when he fired from what looked like an impossible angle and put Tipperary Town back in front.

As shocked as they were by the goal however, Cashel kept their composure and continued to make chance after chance, gaining parity for the second time four minutes before the break. This time Cathal Quinn drove into the area, and looked to have been fouled, but the referee gave a brilliant advantage which saw Quinn’s half shot spin to James Harding  who fired to the net from eight yards out. 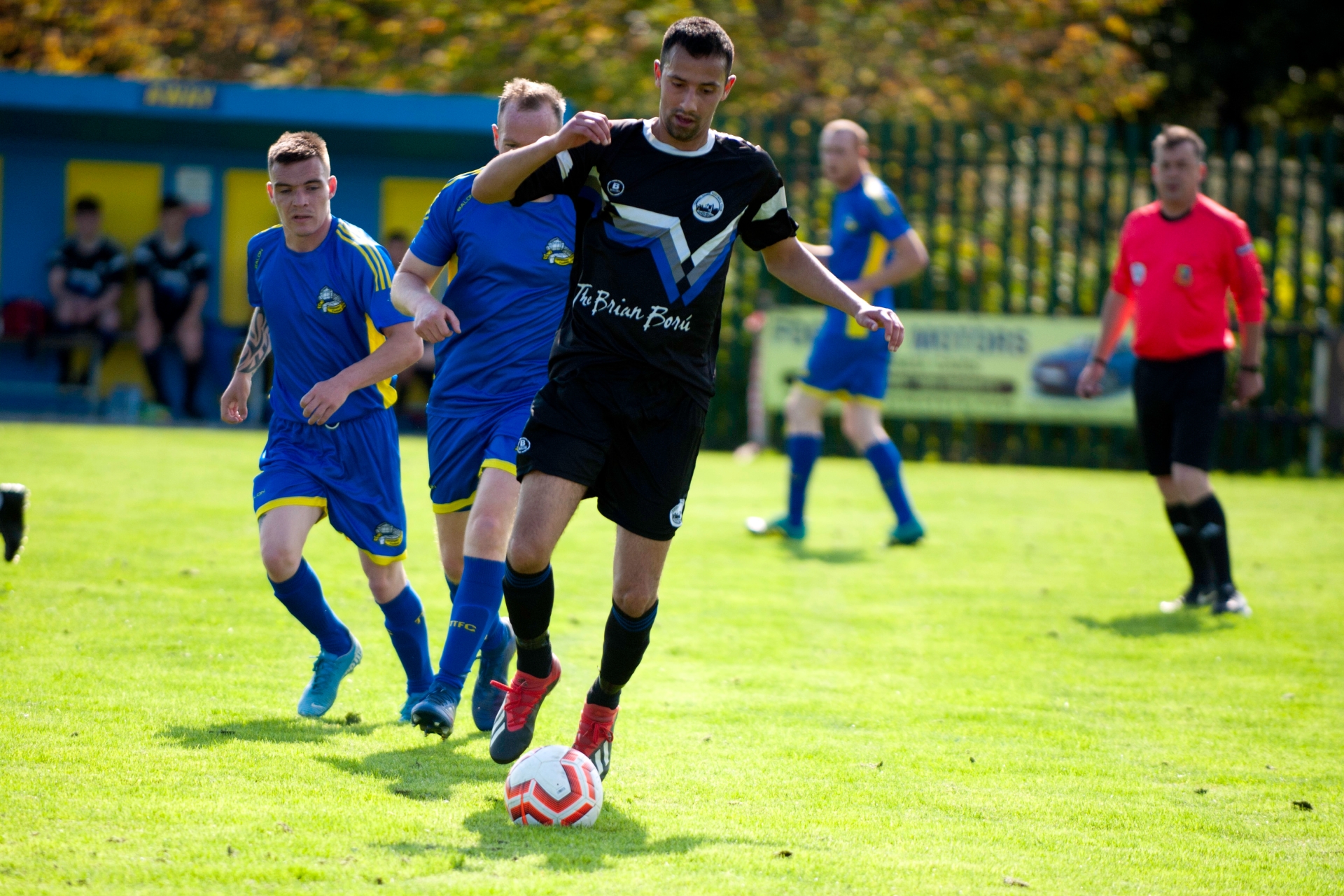 Hotshot Harding! On the ball James Harding who scored five times for Cashel Town in their 6-2 over Tipperary Town in the Division 1 Shield Final on Sunday last.

The home side had barely had time to regroup after this, than they were picking the ball from the net for the second time in three minutes when Callum Meagher burst down the left wing, found Eoin Byrne in the area and he beat three players and the keeper before tapping home from three yards to put Cashel in front for the first time.

It almost got worse for the hosts in time added on in the first half, when Meagher had a shot cleared off the line, and in boxing parlance, the home side were very happy to hear the half time bell, because they were most certainly on the ropes by the time they headed for the break.

The home side started well in the second half and almost brought the game level again two minutes in when Mark Roche got his head to a corner kick but he saw his effort fly over.

Six minutes later with the hosts still on the front foot Michael Frawley headed another chance over the bar, and they were eventually made to pay for not capitalising on their chances when 18 minutes from time a cross from the left wing was headed back across goal by Eoin Byrne to his striking partner James Harding who completed his hat trick by flashing a shot back across the goal to the net.

This wasn’t to be the end of Harding’s goal scoring exploits however as Cashel were by now completely dominant and 12 minutes from time he got his fourth and his side’s fifth when a peach of a ball from David Hall caught the home defence flat footed and Harding ran on to slide the ball to the net from just inside the area. 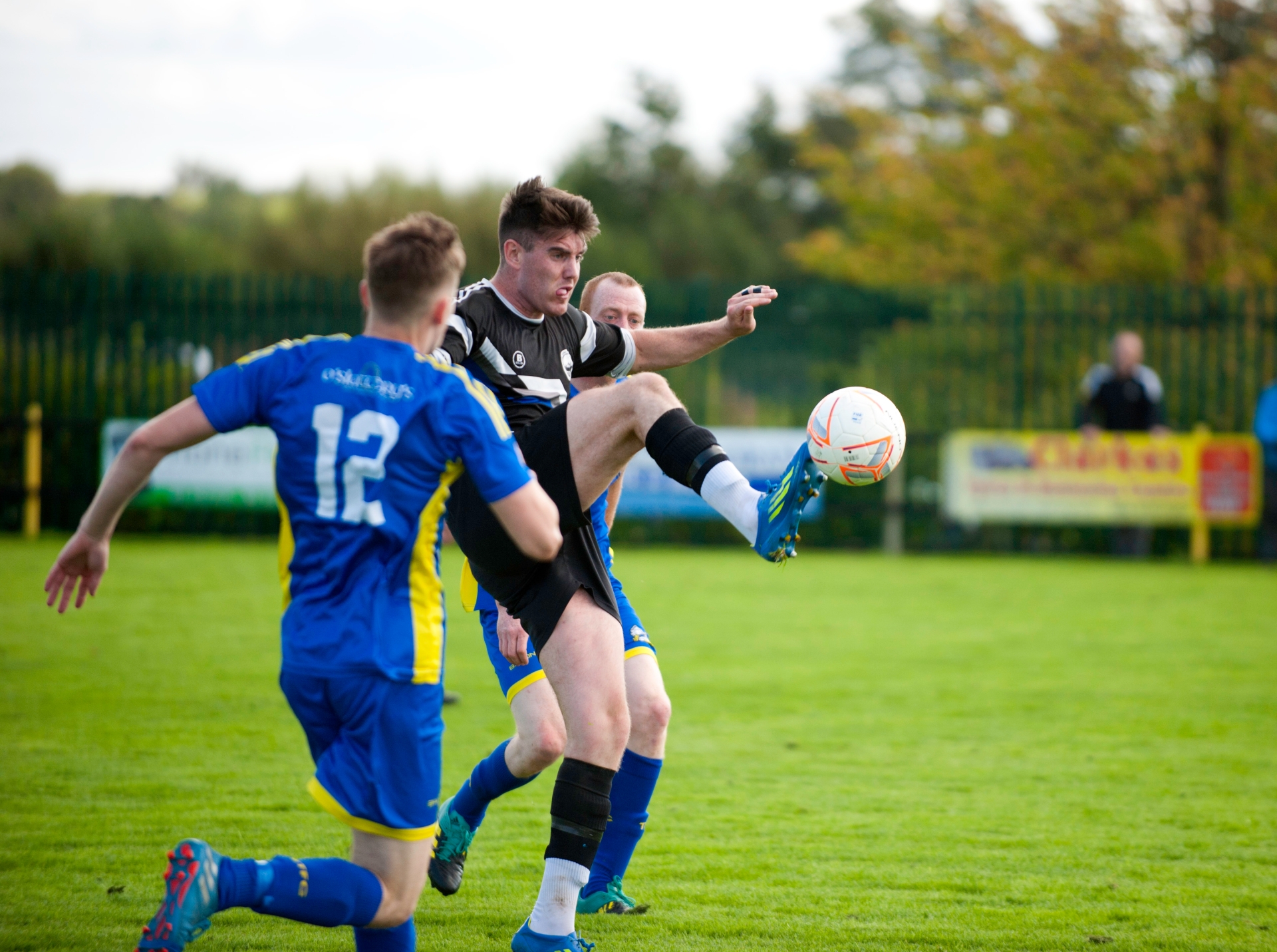 James Hogan cuts out a Tipperary Town attack in the Division 1 Shield final on Sunday last.

Harding left the best of his five goals to last two minutes later, when he picked the ball up about 30 yards from goal and instead of driving into the area fired an unstoppable shot to the net to put the result beyond all doubt.

The home side looked extremely leggy at this point and Cashel emptied the bench to exploit the gaps with younger fresher legs, but that was the end of the scoring for the day and Cashel ran out winners by 6-2, and finishing what has been a very good season for them on a high note with their second piece of silverware for the season.