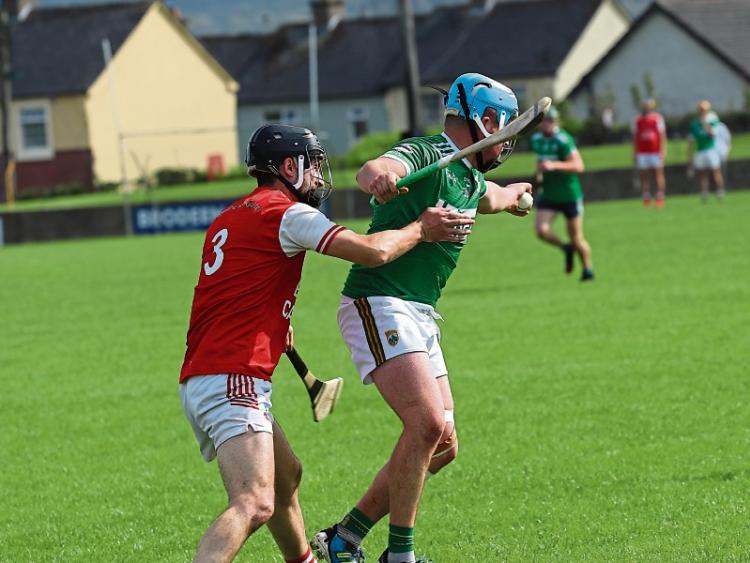 Golden/Kilfeacle secured their Intermediate Hurling status for 2021 with a comfortable victory over Galtee Rovers in Sean Treacy Park on Saturday afternoon. On a bright sunny day with near perfect conditions for hurling it was Golden/ Kilfeacle who always looked in control in all sectors of the field in what was an all-round team performance.  Sean O’Halloran’s goal with ten minutes to go sealing Golden/Kilfeacle’s status for 2021.

Golden/Kilfeacle playing with the aid of a strong breeze started with intent and Andy Byrnes had a point on the board in less than fifty seconds. This was immediately followed by one from Seanie O’Halloran in the opposite corner. Golden/ Kilfeacle should have been further ahead but for three wides in quick succession. Adam McGrath opened Galtee’s account with a point from play but Andy Byrnes responded with another for Golden/Kilfeacle

Tony O’Brien and Andy Byrnes (free x 2) swapped points. The latter now in superb form as he pointed from long and close range.

Galtee Rovers cut the deficit to the minimum with two quick fire points from Colin Morrissey and Tony O’Brien. The latter’s effort a long range one from around the Golden/Kilfeacle sixty five. It was a close as Galtee Rovers would get.

Andy Byrnes pointed another free and Sean Hayes named at fourteen but operating at wing forward opened his account. Golden/ Kilfeacle leading 0-7 to 0-4 at the water break. The sides continued to trade scores for the second quarter but gradually Golden/Kilfeacle increased their advantage. Andy Byrnes and Sean O’Halloran to the fore on the scoreboard for Golden / Kilfeacle while Galtee Rovers had points from Colin Morrissey, Adam McGrath and Tony O’Brien. Golden/Kilfeacle ahead at the break 0-13 to 0-7.

Galtee Rovers now with the breeze were landing their puckouts just past their half forward line and cut the deficit in half in the opening eight minutes of the resumption with points from Tony O’Brien, Colin Morrissey and Adam McGrath. Golden/Kilfeacle struggling to find the target in this period despite multiple chances. Jim Bob McCarthy changed this and two points from Andy Byrnes saw them back six in front. One of Byrnes points was hit as he was falling to the ground. Galtee Rovers forwards struggled to gather any real clean possession under a well marshalled Golden/Kilfeacle defensive unit which now also had Shane Stapleton dropping back as extra cover. Colin Morrissey kept Galtee Rovers in touch with two pointed frees but the game was put to bed with ten minutes of normal time remaining. Seanie O’Halloran finishing to the net after catching a cross field pass from Jim Bob McCarthy.

The sides traded points after this but Galtee Rovers increasingly had to drop placed balls in around the square to try and muster a goal. The goal never materialised and Killian Hayde was rarely threatened in the Golden/Kilfeacle goal.

Golden/Kilfeacle were well in control in defence which was a well structured unit on the day. Niall Heffernan was in control in the middle. Sean Hayes proved a handful at wing forward while up front Andy Byrnes and Sean O’Halloran were a constant threat in the inside forward line finishing with 1-14 between them (1-7 from play).

Best for Galtee Rovers were Eamon O’Connell at full back and Conor O’Sullivan at wing back. In a game where their forwards struggled for clean possession it was the experience players of Tony O’Brien and Colin Morrissey and the younger Adam McGrath who were the go to men for most of their attacks.