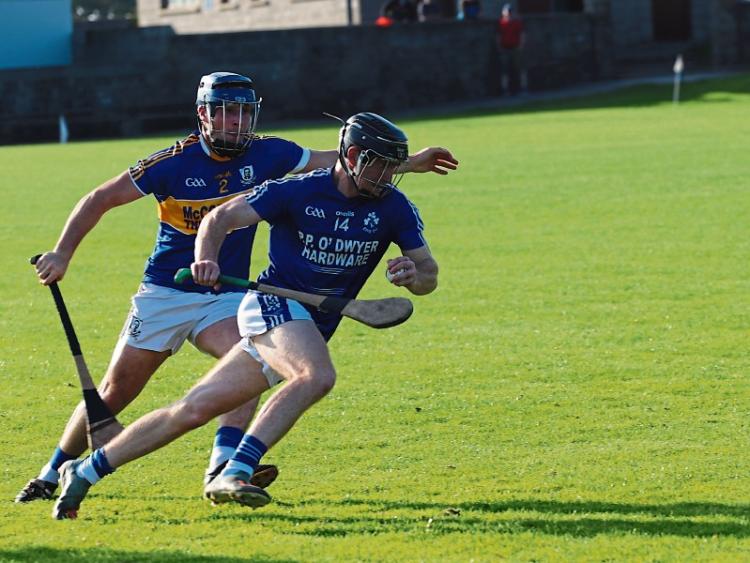 Both sides went into the game having gone to the last day in their respective County Championships before confirming their status for 2021. Sean Treacy’s playing in their first West Senior  Championship game in 30 years went in search of a first win in the competition since 1988 and a place in the final for the first time since 1982. Eire Og, beaten finalists twelve months ago after a replay, were looking to reach the decider for the fourth year in a row.

Sean Treacy’s were quick off the mark with Brian Carey (free) and Pat Deegan getting on the scoreboard. Aidan Griffin levelled the game by the seventh minute with two points of his own - the first from a placed ball. Sean Treacys were holding firm and their half back line was well on top as Eire Og struggled for decent possession. Sean Rodgers dropped back to his usual role covering behind the half back line. Another Brian Carey free edged Sean Treacys ahead. In the 11th minute Donal O’Dwyer who had moved further out the field found his way past the Sean Treacys half back line before passing to Ronan O’Brien who dispatched to the net. A minute earlier Jamie O’Dwyer saved well to deny Darragh Kennedy at the opposite end. Two further Brian Carey frees had the game tied up at the water break 1-2 to 0-5.

The sides were level twice on the resumption. First Brian Carey (free) and Tom Fox swapped points before Carey again pointed another free only for Kev Fox to burst through and level the game for the fourth time. Eire Og edged ahead through another Aidan Griffin point from a sixty-five. Pat Deegan levelled the game for a fifth time.  Eire Og finished the half the stronger with Aidan Griffin continuing his good form on place balls while Ronan O’Brien added to his earlier goal with a point. Brian Carey pointing another free to see just two points between the sides at the break, 1-8 to 0-9.

Eire Og started where they left off at half time and increased their advantage with three points from Aidan Griffin placed balls while Donal O’Dwyer got his first point of the game. Shane Stapleton got Sean Treacy’s off the mark for the second half when he pointed a long range free. Tom Fox and Paul Devlin pointed either side of a Brian Carey free to see six points between the sides after ten minutes.

Tom Fox who got onto a lot of ball and Michael Feehan swapped points before the water break, but it was Eire Og who were well in control with Donal O’Dwyer dropping well back at times to win possession and start an attack. Sean Treacy’s struggled to get real structure into their attack as the Eire Og defence bottled them up as they struggled to find space.

Aidan Griffin pointed on the resumption and with ten minutes to go Eire Og looked comfortable as they lead by seven points. But there was a grand finale in store as Sean Treacys staged a magnificent comeback to draw level. When Sean Treacys were awarded a twenty-one-yard free, Shane Stapleton got the signal to come up and take it. Just to the left of the goal near the stand side Stapleton found the net and the goal Sean Treacys badly needed had arrived. Sean Treacys were now a different team and their confidence returned. Michael Feehan who was always a threat cut the deficit to three points as he added to his tally for the day. Points from Patrick Dawson (free), Michael Feehan and Darragh Kennedy had the game all tied up as the clock went into injury time. Sean Treacy’s were in control now as Eire Og struggled for a foothold. Brian Carey intercepted a pass and shot for goal only for Diarmuid Ryan to dive across and block. Jody Ryan got out ahead of Conor O’Brien and turned for goal but his pass didn’t go to hand and the chance  was gone.

In the next attack Kev Fox powered his way through before  pointing what would the winning point. Eire Og  coming through by the minimum to set up another final with defending champions Clonoulty.