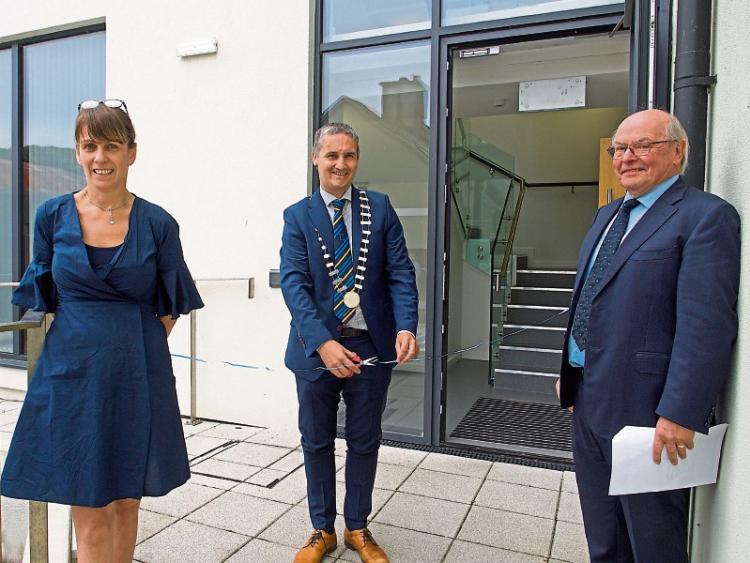 Carrick-on-Suir’s Stable Lane Digital Hub will open its doors on October 1 and already has six clients signed up to use its office desks with high speed internet access.

One of those clients is Intellicom, a large telecommunications company that has decided to base a satellite office at the hub, which is located on the top floor of Carrick-on-Suir Town Hall.

Carrick-on-Suir Municipal District chairman Cllr Kevin O’Meara officially launched the hub at an outdoor ceremony in the  Town Hall’s  courtyard  last Thursday.  The project has been spearheaded by Carrick-on-Suir Tourism & Economic Development Committee  (COSTEDC) and is the first of 13 enterprise initiatives proposed in the Carrick-on-Suir Strategic Vision 2030 plan.

The hub has office desk spaces for sixteen workers spread over two spacious offices. Half that number of work spaces are currently available for use due to the Covid-19 pandemic social distancing restrictions.

“They are beautiful,  modern, bright offices with all the mod cons. Our capacity has been reduced due to Covid-19 but it doesn’t take away from the lovely office space that it is,” said Stable Lane Digital Hub’s CEO Aisling O’Connor.

She told the opening ceremony  the hub was suitable for solo entrepreneurs, small firms and people working remotely for larger companies.

“In the past few months the nature of working changed and a lot of people have been working from home, which is not always ideal as it’s full of distractions and very isolating.”

She noted  many people are gravitating towards co-working solutions, renting office desks part-time at  affordable rates.

Ms O’Connor argued the hub was also an ideal option for people starting a new business. The beauty of the facility was that you could rent an office desk there part-time, full-time or just half a day a week.

“Starting a small business can be very challenging. Sometimes it can be nice to be around a network of people.”

It was also more cost effective for new business start ups than renting an entire office.

She reported that the Hub’s first clients came mostly from the tech sector and professional services and represented a mix of big and small businesses.

COSTEDC chairman Tony Musiol said they were very encouraged by the response so far to the Stable Lane Digital Hub and believe its opening was very well timed as people not only want but need alternatives to traditional work arrangements.

He explained this was the first phase and COSTEDC was actively working on the second phase to create more than 50 work spaces at another location in Carrick.

“Our vision for Stable Lane Digital Hub is not just to fill the desks; it is to provide a location where the creativity of the people of this town and its hinterland will be encouraged and driven to create new businesses, thereby creating new jobs, further spin off businesses and future prosperity and revenue in the town.

“On this day when a second Carrick man has sealed his grip on the Maiott Verte Green Jersey in the Tour de France, such a future is within our grasp,” he declared proudly referring to the town’s cycling hero Sam Bennett.

Cllr O’Meara said it was a great occasion and paid tribute to all the groups in Carrick-on-Suir who worked together on this project. He also paid tribute to  the local authority for providing the office space.

Liz McGrath of Carrick-on-Suir Municipal District said to see this project delivered in the current climate was exceptional.

On behalf of the local authority, she wished the hub every success and stressed the council was happy to give the hub any support it could.